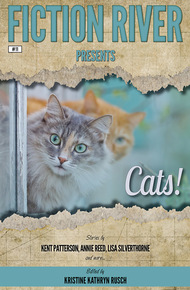 Cats display many qualities, from marvelousness and brilliance to affection and exasperation (humans never live up to their expectations.) These stories cover all of that and more. In this latest volume of Fiction River Presents, some of our favorite writers capture the mystique of these fabulous felines with warmth, some magic (goes with cats), insight, and even some suspense. Find out why Adventures Fantastic says: "If you haven't checked out Fiction River yet, you should. There's something for everyone."

Includes:
"Queen of the Mouse Riders" by Annie Reed
"Fur Tsunami" by Kent Patterson
"Speechless in Seattle" by Lisa Silverthorne
"Cat and Mice" by Jamie McNabb
"The Magic Cat of The Hidden Springs Inn and Spa" by Kari Kilgore
"The Secret of Catnip" by Stefon Mears
"Helmie" by Kristine Kathryn Rusch

I love cat stories, and because I do, I tend to buy a lot of them when I'm editing. All are wonderful, but some are extremely memorable. So I put together a collection of the most memorable stories so that I could share them easily. – Kristine Kathryn Rusch

Cats. They're wonderful, brilliant, affectionate, and infuriating. Just tonight, as I prepared to write this introduction, my two boys—one an eighteen-pound half-Siamese cat who thinks he's still the tiny kitten with big ears he once was and the other a six-pound mostly blind Birman who pretends he isn't running the house at all—decided to play-fight. Lots of screaming, lots of hair pulling, and lots of leaping ensued. I've learned not to get involved.

If I stay out of it, I don't get scratched, and besides, it always ends the same way—with the both of them eating kibble, shoving each other affectionately to make room at the same bowl. Rather like adult humans who argue over sports and end up at the bar not an hour later, laughing and slapping each other on the back.

I've had cats since I moved out of my parents' house when I was nineteen. Generations of cats, generations of stories. Each cat had their own little bit of magic. There was the full Siamese, Buglet, who could best Dean in any contest of wills. I still dream about her, but in the dreams, she's a beautiful woman with long dark hair who gives me mysterious looks from across the living room. There was Galahad, the rather stuck-up orange cat, who ran our household with an iron paw—and who still does, truth be told, even though he's been gone for years now. Not to mention Spike, who would look on our current boys with disdain, figuring they aren't impish enough.

People who live with cats have a multitude of cat stories, and some of those stories are filled with the inexplicable. That's why so many fictional cat stories combine the feline with the magical.

We've published a lot of cat stories at WMG, and we'll be publishing more. I had the choice of a lot of tones as I combed through our inventory. Dark? Filled with heartbreak? Funny? Warm? Sweet?

I decided to forgo the heartbreak this time, more or less, (although there's one exception, depending on how tenderhearted you are). I went for the warm and magical instead, along with a bit of insight. There's also some suspense and tension.

I love them all, though. I picked them from memory, then went back to double-check myself and reread each one, enjoying it more the second (or third or fourth) time.

I was having a wonderful evening until the fight erupted, and the fur started to fly. It's hard to read when cats are yowling at each other, before heading off to loudly crunch kibble.

I hope it's a bit quieter where you are, and that no fur is floating through the air. I also hope you enjoy these stories as much as I do.