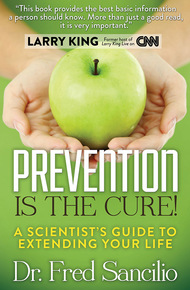 Dr. Fred Sancilio has published more than twenty articles in peer-reviewed scientific journals, holds fourteen domestic and international patents, and contributed to the development of more than one thousand drugs marketed in the United States, Europe, and Asia. The founder of aaiPharma, a major contract pharmaceutical research company, and Sancilio & Company, a rapidly growing biopharmaceutical company based in Florida, Sancilio's Prevention is the Cure! is his Xth book.

Prevention is the Cure! by Dr. Fred Sancilio

A scientist discusses the nature of health and sickness—and what we all can do to remain vibrant as we grow older—in a book that takes you through the root causes of most diseases and guides you in ways that can save your life and the lives of others.

Discover the four primary causes of illnesses and how to avoid them. Learn the ten commandments of longevity, the secret habits of centenarians, and, most important, learn how you can remain youthful well into your eighties and nineties. Dr. Fred Sancilio shares the story of the tragic demise of his own father, the tipping point to his quest to find the truth about why some people always seem to be sick, while others are perpetually healthy. Learn how scientists study the differences between eating habits of various populations, and the connection between the incredible health of the Inuits of Greenland and a diet that could well benefit all of mankind. This guidebook to a long and healthy life will lay the groundwork for a robust and active future.

I live in Southern California.

Out-of-control forest fires have become the norm in my area of the country, causing incalculable damage with predictable regularity. And while the people who study these things work like demons to figure out the most effective ways to fight these fires, the real action is taking place in the think tanks where people work on figuring out how to prevent them in the first place.

See where I'm going with this?

The kind of destructive fires we're talking about are very much like chronic diseases. And while raging fires and ravaging diseases both have multiple causes, there are a few biggies that stand out for each category. Combine mild winters, long dry spells, rugged mountains, and dense, fast-growing flammable shrubs with one random tourist carelessly tossing a cigarette, and—boom!—there's your flash fire. Mix stress, inflammation, oxidative damage, exposure to toxins, a high-sugar diet, and a sedentary lifestyle, and—to continue the fire metaphor—you've got the equivalent of a pile of gas-soaked rags lying in a dark broom closet. It's the absolute perfect environment for bad things to happen.

Dr. Fred Sancilio—about whom I'll tell you more in a moment—has put together a cogent argument for what he believes are the main factors involved in disease—all disease, or at least all the major ones we worry about. The overwhelming majority of these factors are things we can actually do something about. Seriously. And Dr. Fred has some pretty first-rate ideas about what we ought to do.

And they're not that difficult.

Now, admittedly, there are some things we can't do much about—our genes, for example. But the things we can do something about massively outnumber (and usually outweigh in importance) the ones we can't. And, as it turns out, even when it comes to those factors we believe to be out of our control—the genes we were born with—we do have some measure of influence.

Here's why: our environment—and our choices, such as the ones discussed and recommended in this book—profoundly influence how our genes are expressed. (There is a whole field of study devoted to this called epigenetics.) Genes are much more "plastic" than scientists once believed they were. Rather than being fixed quantities that always behave the same way in your body no matter what you do, they're actually more like light switches—they can get switched on under some circumstances and remain "off" in others.

You have a lot more control over those circumstances than you may have realized.

Your destiny is not in your genes.

And that's the message of Dr. Fred's book.

According to Dr. Fred, your destiny is very much in your hands—the result of choices you make and actions you take. Following the principles outlined by Dr. Fred can, in my opinion, probably have a greater influence on your personal health and the quality of your life than the vast majority of your 30,000 genes.

So what am I doing writing the foreword to this terrific book?

I met Dr. Fred Sancilio through a highly regarded mutual friend in the health business, Mike Danielson. Fred wanted very much to write a book, and I had some experience in that area, so we arranged for me to consult with him throughout the almost year-long process that resulted in the book you now hold in your hands (or are reading on your Kindle).

But under "normal" circumstances, Fred Sancilio and I probably wouldn't have met.

First of all, we travel in different circles. I hang out with firebrand nutritionists and doctors who are constantly taking the establishment to task for its poor dietary advice and over-pushing of drugs. And we (I include myself) are frequently doing so loudly and severely. Fred never raises his voice. He's a staunch advocate of natural products and lifestyle choices for disease prevention, yet he works productively with people who are all-too-frequently on the "enemies" list of the natural products industry—government regulators from the FDA, for example. He's the ultimate "bipartisan" who understands every side of the story and can get things done.

Fred's a sober, scholarly, and serious academic with a PhD in research chemistry. I've got a PhD in holistic nutrition, a master's in psychology, and an undergraduate degree in music. (I probably couldn't have passed high school chemistry, if, in fact, I had taken high school chemistry, which I most decidedly did not.) Fred built one of the most successful pharmaceutical labs in the country. I've spent half my career railing against the sins of Big Pharma. Fred came from a hard-working, blue-collar Italian family in New Jersey and has the work ethic to show for it. I came from what was then quaintly called an "upper middle class" Jewish family in New York City, with a Harvard-trained lawyer for a father and a Juilliard-trained musical theater performer for a mother. Fred wears a three-piece suit to work. I haven't owned a tie since 2001.

We are not what you might call "natural allies."

But I can't readily think of too many people in my industry for whom I have more respect. He is the most knowledgeable person I've ever met on a subject I consider one of the most important in all of human nutrition—omega-3 fatty acids. And, aside from his awesome knowledge, I respect his passion, his commitment, his business acumen, and his honesty.

All of which were wildly apparent the first day I met him.

All of which are quite evident in the pages you're about to read.

This book is your chance to benefit from that knowledge, and to profit from his commitment to the health of the planet and all of its inhabitants.

Of the wise advice contained in this book, my grandmother would have said, " Couldn't hurt."

But I'd put it a bit more emphatically.

If you follow the advice in Prevention Is the Cure, it not only "won't hurt"—it very well might save your life.