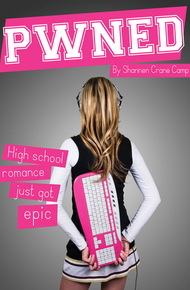 Shannen Crane Camp was born and raised in Southern California, where she developed a love of reading, writing, and anything having to do with film. After high school, she moved to Utah to attend Brigham Young University, where she received a degree in Media Arts and found herself a husband in fellow California native Josh Camp. The two now live in either California or Utah... they still can't decide. Shannen loves to hear from readers, so feel free to contact her at [email protected] or visit her website for more information.

Reagan West has a perfect life. She's at the top of the high school food chain as co-captain of the cheerleading squad and she's best friends with the most evil girl in Albany, Tawny Perez, which means she's never on the receiving end of her wrath. The only trouble in Reagan's perfect life comes from the constant threat of her dirty little secret leaking to her fellow classmates and casting her into a lifetime of ridicule.

Reagan West is a closet gamer and hates her role as the evil cheerleader.

But, as any well versed teenager knows, it's better to suppress your own nerdy tendencies than to submit to a lifetime of being shoved into lockers and so, Reagan bravely soldiers through life as a reluctant bully… until a boy from her guild moves to her school and becomes Tawny's next target. The newcomer threatens to reveal Reagan's nerdy little secret and force her to come to terms with who she truly is. Now Reagan has to decide if she's going to defend her fellow geeks, or if she'll continue to be a total troll.

Shannen Camp adds a lighter touch to the bundle. Her teen heroine must come to terms with her true self, in this tale of a popular girl who’s secretly the geekiest of them all –Anthea Sharp

Hairspray permeated the air and pom-pom strings littered the girls' locker room like the aftermath of a particularly bad hurricane —if that hurricane happened to hit the Miss USA pageant, that is. The mood was dismal, considering that it was halftime of our school's homecoming game. Normally at this time, Tawny and I would be pumping up the rest of The Squad and prepping them to run back onto the field.

Today, our team was epically failing and needed more than just a few screaming girls in short skirts. They needed a miracle. A full-blown $40.00-expansion-pack-where-they-introduce-flying-mounts type of miracle.

"Well, I'm not going to lie to you and say we'll win for sure, but I will tell you that if we do all we can, we might actually stand a chance," I said to the group of sullen cheerleaders lining the benches. The sea of drooping blonde heads showed a less than an enthusiastic reaction to my rallying attempt. They had even stopped applying their lip gloss.

"Reagan, our yelling some bogus cheer isn't going to make our team suck any less. It's just going to make us look like idiots for cheering for a sinking ship," Ashleigh whined from the back of the group. She wasn't helping my little pep talk at all.

"Shut it Ashleigh. You're just mad because you gained too much weight to be a flyer this year, fatty" Tawny threw back at her icily.

I was definitely losing them. The chilly November air wasn't brightening our spirits in a big way, but I was co-captain and I needed to fix this, since Tawny was obviously not taking her responsibility seriously.

I was like the last DPS Ranger in a raid full of Healers. They were cute, but they were also squishy, and right now they needed someone to bring the power back to the guild. Or squad. Whatever you wanted to call it.

Right, I needed to focus.

I could be a butt-kicking level 85 Hunter on my own time, when I was in the privacy of my own room. There was absolutely no way I wanted to let that little secret slip out accidentally while I was trying to rally the troops. Friends or not, The Squad would eat me alive if they knew I played nerdy online games, and that would be the end of me. I would have committed social suicide.

Luckily, I was kind of a pro at hiding my nerdy little secret.

You see, there was the normal, pretty, popular cheerleader "me," who got manicures and spent two hours doing her hair in the morning, and then there was the other "me," who could kick your sorry noob butt in two seconds flat using only a keyboard and mouse.

At times, I wished I wasn't so obsessed with something as completely dorky as a video game. I mean, what self-respecting member of The Squad could call herself a true Pirate when she spent her weekends farming for gold and raiding with people she had never met?

But in all fairness, it wasn't my fault. The game—Voyager's Quest—was so incredibly addicting, and it was slightly possible that I was a nerd at heart. I had just been fortunate enough (unlike most nerds) to learn at an early age that life isn't like a movie. When you embrace what you love, you end up getting stuffed into a locker; you don't suddenly become popular because your peers realize that they've been wrong about nerds all along.

This wasn't some after school special.

I had an excellent sense of self-preservation and that meant being a mean girl by association. I was what I liked to call a "passive plastic." I wasn't a mean person myself, but because I stood by and let Tawny get away with whatever she wanted, I was just as guilty as she was.

It was kind of a cop-out on my part, and it did suck a little, but you know what sucked more? Being shoved in a locker with gum in your hair.

It could be pretty difficult balancing two lives, but I actually managed fine unless I was under a lot of stress—like being the co-captain of a cheerleading squad rooting for a losing team.

I shook my head until my tight blonde ponytail swung back and forth, trying to clear my thoughts.

"All right, we need to focus, not sit here and insult each other or our team. We're going to go out there and we're going to cheer like we mean it, because even if we lose, we're going to a party at Tawny's house after the game, so stop being a bunch of whining babies and cheer!" I yelled at them.

The mention of an unsupervised party seemed to get them pumped, or at least made the situation seem less dire. With that, they all grabbed their pom-poms and ran out the double doors onto the field, screaming like they thought we'd win.