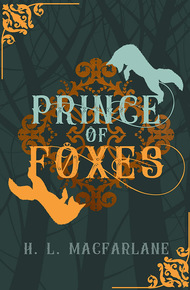 Hayley Louise Macfarlane hails from the very tiny hamlet of Balmaha on the shores of Loch Lomond in Scotland. Having spent eight years studying at the University of Glasgow and graduating with a BSc (hons) in Genetics and then a PhD in Synthetic Biology, Hayley quickly realised that her long-term passion for writing trumped her desire to work in a laboratory.

Now Hayley spends her time writing across a whole host of genres. After spending much of 2019 writing fairy tales she'll be branching into apocalyptic science fiction, paranormal & urban fantasy and maybe even a touch of horror in 2020. But never fear: the fairy tales won't be away for long!

During 2019, Hayley set herself the ambitious goal of publishing one thing every month. Seven books, two novellas, two short stories and one box set later, she made it. She recommends that anyone who values their sanity and a sensible sleep cycle does not try this.

Sometimes a fox is not a fox, and a man is not what he seems.

When Lachlan, the golden Prince of Faeries, is transformed into a fox and banished from the forest on the eve of his mother's funeral, the last creature he expects to seek help from is a human.

But Sorcha Darrow is not so easily enchanted by the wily faerie. Only after discovering her father means to marry her to a wealthy Londoner does she decide to help him, seeking the power of a being even Lachlan is wary of: a kelpie. In finding one Sorcha hopes that she may just avoid her own dire fate in the process.

With Sorcha's dreams being their only true form of communication, Lachlan has to race against time to break his curse and take his place as king before he's doomed to live as a fox forever.

But someone else is after the throne, and may just use Sorcha's growing connection to Lachlan to reach it.

He delighted over thinking how his stepfather and stepbrother would react when he brought back a human girl, enchanted to sing for him until the end of time. I wonder what Ailith would think. Would she be jealous? Would she mourn for the loss of my attention?

Lachlan was excited to find out.

He stretched his arms above his head, causing his earring to jingle once more. Below him the girl stilled. She stopped singing, dark brows knitted together in confusion.

"Is somebody there?" she asked, carefully placing her basket down by her feet as she spoke.

"You have a lovely voice," Lachlan announced. He was satisfied to see the girl jump in fright, eyes swinging wildly around before she realised the voice she'd heard came from above. When she spied Lachlan standing high up on the boughs of the oak tree she gasped.

"You are – it is early to see one of your kind so far out of the forest," she said. She struggled to maintain a blank face, to appear as if she wasn't surprised in the slightest to see a faerie standing in a tree.

Lachlan laughed. "I suppose it is. Today is a special occasion; we are all very much wide awake."

The girl seemed to hesitate before responding. Lachlan figured she was trying to decide if it was wise to continue such a conversation with him. "What occasion would be so special to have you all awake before noon?"

"The funeral of the queen. My mother."

That was all she said. Lachan had to wonder what kind of reaction he'd expected. Certainly not sympathy; he had no use for such a thing.

"You are not at the funeral?" the girl asked after a moment of silence. "If you are her son –"

"I shall get there eventually," Lachlan replied. He sat down upon the branch he'd been standing on. "Tell me your name, lass. Your voice is too beautiful to not have a name attached to it."

To his surprise, she smiled. "I do not think so, Prince of Faeries."

"You wound me," he said, holding a hand over his heart in mock dismay. "An admirer asks only for a name and you will not oblige his lowly request? How cruel you are."

"How about a name for a name, then?" she suggested. "That seems fair."

Lachlan nodded in agreement. The girl could do nothing with his name. She was only human.

"Lachlan," he replied, with a flourish of his hand in place of a bow. "And you?"

"A pretty name for a pretty girl. Is there a family name to go with –"

"I am not so much a fool as to give you my family name," Clara said, "and I think you know that."

He found himself grinning. "Maybe so. Come closer, Clara. You stand so far away."

He was somewhat surprised when she boldly took a step forwards, half expecting her to decide enough was enough and run away.

Even careful humans give in to the allure of faeries, he thought, altogether rather smug. It won't be long until I have Clara's full name.

When Clara took another step towards him Lachlan noticed that her eyes were green.

"Your eyes," he said, deftly swinging backwards until he was hanging upside down from the branch. Lachlan's face was now level with Clara's, though the wrong way round. She took a shocked half-step backwards at their new-found proximity. "They are strange."

"I do not think my eyes are as strange as yours, Lachlan of the forest," she replied. "Yours are gold."

"Not so uncommon a colour for a Seelie around these parts. Yours, on the other hand…we do not see mismatched eyes often."

Clara shrugged. "One blue, one green. They are not so odd. Most folk hardly notice a difference unless they stand close to me."

"Do many human boys get as close to you as I am now?" Lachlan asked, a smile playing across his lips at the blush that crossed Clara's cheeks.

She looked away. "I cannot say they have."

"Finish your song for me, Clara. I'll give you something in return."

"And what would that be?" she asked, glancing back at Lachlan. Her suspicion over the sudden change of subject was written plainly on her face.

He swung himself forwards just a little until their lips were almost touching. "A kiss, of course."

"That's…and what if I do not want that?"

"Then I guess I leave with a broken heart."

"You do not believe me," he complained.

"You really are a cruel girl."

The two stared at each other for a while, though Lachlan was beginning to grow dizzy from his upside down view. But just as he was about to right himself, Clara took a deep breath and began to sing once more.

There were four verses left of her Burns poem, about a ghost who appeared in front of the poet to lament over what happened to him in the final years of his life, and it was both haunting and splendid to hear. Lachlan mourned for the spirit as if it had been real, and wished there was more to the poem for Clara to sing.

But eventually she sang her last, keening note, leaving only the sound of the wind to break their silence. When Lachlan crept a hand behind her neck and urged her lips to his Clara fluttered her eyes closed. The kiss was soft and chaste – hardly a kiss at all – but just as it ended Lachlan bit her lip.

The promise of something more, if Clara wanted it.

The girl was breathless and rosy-cheeked when Lachlan pulled away. A rush ran through him at the sight of her.

"Tell me your last name," he breathed, the order barely audible over the breeze ruffling Clara's hair around her face.

She opened her eyes, parting her lips as if to speak and –

The sound of bells clamoured through the air.

Clara took a step away from Lachlan immediately, eyes bright and wide and entirely lucid once more.

"I have to go," she said, stumbling backwards to pick up her forgotten basket and cloak before darting away from the forest.

No matter, Lachlan thought, as he dropped from the branch to the forest floor. I shall see her again. I will have her name next time.

But he was disappointed.

Now he had to go to his mother's funeral alone, with no entertainment to distract him from his grief when evening came.