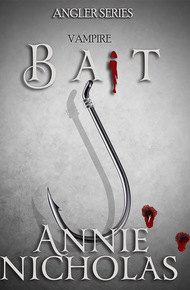 Annie Nicholas writes vampire urban fantasies and paranormal romances with bite. She has courted vampires, hunted with shifters, and slain a dragon's ego all with the might of her pen. Besides writing, she is also an urban farmer, dog rescuer, and best cook in her house—fine, only cook in her house.

Live bait makes all the difference.

Mysterious deaths have occurred in Budapest and vampires are suspected. Connie Bence fits the victim profile perfectly so her slayer boss sends her to draw out the vampires responsible, except when the bait is taken, the vampires escape with her as a hostage. She's hurled into vampire society, where she must face her greatest fear—her undeniable attraction to the vampire overlord Rurik. After her husband's death, Connie thought her heart too broken to ever love again, but the lure of an immortal man is strong.

The body count keeps rising, the pressure is on, and the slayers want a stake through Rurik's heart. Is he guilty? Connie doesn't think so, but if not him, then who? If she doesn't find out soon, the people she cares about stand to become collateral damage.

Annie shares a devious murder mystery set in Budapest packed full of vampires and slayers. The imagery and descriptions in Vampire Bait will make you feel like you're overseas, a welcome escape for 2020. And we go beyond Twilight with a heroine determined to stand on her own two feet and tackle vampires on her own terms. – Michelle Fox

Live bait made all the difference, pretty much a no-brainer. If the prey hungered, it was best to use someone like me. Most people don't believe in vampires, thinking them myth or legend. I know otherwise. My job comprised of luring these monsters to their executioner.

I was bait and I had been having trouble attracting my quarry's attention. So, in desperation, I dressed outside the Budapest nightlife norm. The beautiful, exotic eastern European women filled the place with their form fitting, dark clothes and smoky make-up. Time was running out and this look made my five-foot-two frame invisible in this crowd where I had to stand out.

Instead, I tousled my shoulder-length, blond curls and applied only a little lip gloss. The high-waisted, filmy white dress made me a beacon in the dark, especially since it had a horrid neckline low enough that I had better not sneeze. The silver stiletto heels gave me some extra height to be seen. I pulled out every trick I knew to lure out vampires. Time I hooked me a monster and reeled him in.

The popular nightclub jammed, and on any other night I'd be having a great time, but the crush of people made it difficult to spot anyone. Even with heels I had trouble seeing anything. I twisted and swung my hips to the pounding music as I grooved across the sunken dance floor. Tables stood around the edges so the patrons could watch.

I should have shimmied instead of turned when someone's elbow made contact with my forehead. Flailing, I tottered on my heels, tripped over someone's foot, and landed on the empty staircase.

Legs sprawled, white dress twisted too high and pulled too low, I gripped my throbbing head in surprise as the world spun.

A shadow blocked out the colored lights reflecting off the mirrored walls. It distracted me from my revealing predicament. Large, strong hands grasped my shoulders. I gazed up and my heart raced.

Rurik. The target I had hunted for in every ruin-club, open-air party, and disco in Budapest. A delicious, hunky, make-me-swoon vampire.

He lifted me to my feet and said something in Hungarian.

Tourists had a better grasp on the language than I did. My employer hadn't given me time to prepare before shoving a plane ticket in one of my handa and the assignment in the other. I shook my head. "English?" My heart hammered faster than the music's beat. I'd searched weeks for him and he found me. Finally.

His cold, arctic, eyes bore into mine. Even with me wearing heels he towered over me. I couldn't help but admire his dark, slicked back hair, exposing fine sculpted cheekbones, a narrow face, and a set of full lush lips—all male and very tasty.

Once assured I could stand on my own, he released me, and brought my hand to his mouth to brush those lush lips against my knuckles. "You're an unexpected treasure," he translated over the loud music.