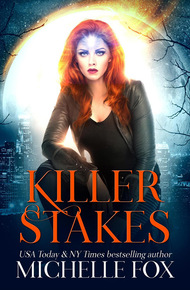 When I found out vampires were real, everything changed.

And yet, strangely, it all stayed the same, too.

I still worked for a secret metaphysical branch of the FBI. Although, thanks to being thrown around like a rag doll on my last case, I was currently on medical leave. A small mercy given how much personal baggage I had to unload at the moment.

The fallout from the last case didn't stop at bodily injury. It went much further than that, cracking the foundation of my life and my career in one fell swoop.

Supernatural serial killers are a pain in the ass like that.

A psychic FBI agent, the vampire hunting her, and the killer that stalks them both.

Okay, it's weird to hype my own books. Here's what I'll tell you: both books have never been bundled together before making this a BOGO deal for this Story Bundle, and readers have compared the stories to Ilona Andrews' Kate Daniels series. My heroine, Mel goes way beyond Twilight because she's too smart to be impressed by a fancy pair of fangs. The mysteries in each book are intricate and not easily solved even though Mel is psychic...and has an extra, secret super power. – Michelle Fox

My life as a psychic FBI agent was all downside of late.

Not only had a vampire followed me home from my last case, he'd freaking moved into my apartment. I wanted to kick Maxim D'Avignon out, but it wouldn't have done any good.

We were stuck with each other.

Someone had murdered his entire battery pack of psychics, and we didn't know if the killers were coming after us or not. Worse, we were bonded. As in, psychically connected. As in, a true mind meld. As in, I could see through his eyeballs if I wanted to. No amount of distance could change that. Even if an ocean separated us, I would feel him like he was behind me, breathing down my neck.

I'd had no choice. It had been bond with him or let a psychotic killer rage free.

One Dracula copycat killer, just one, and my life went to shit. Solving crimes was supposed to be a good thing, but when the killer was less copycat, and more actual vampire gone mad, all the rules changed.

Because of our bond, because we were roomies, Maxim seemed to think he had carte blanche to be up in my business. I just wanted to rest and let my body heal—the killer had beaten me like a piñata—but Maxim wouldn't leave me alone. He had opinions on everything, and he was always there, hovering over me. I'd lived alone ever since I hit eighteen. I didn't need this much people time.

My new life goal? Eff that. I would figure out how to break our bond, and then we could both be on our merry way. One case shouldn't sentence me to a lifetime of vampires, right?

The only hiccup? Maxim liked being bonded to me. He was convinced I would learn to like it, too.

He didn't know me that well.

"Melia, dear, do you have a mixer?" Maxim hummed to himself as he rummaged through my kitchen. I didn't recognize the song, but it probably had a title like 'Most Annoying Song Ever,' or maybe, 'I Wrote This Song Because I Hate People.'

I took in a slow sip of air, breathing around my pain, and hoped my latest pain pill kicked in soon. That damned Dracula case had filled my body with several percussion sections of ouch. Everything throbbed to its own drum. Being thrown around by a supernaturally strong serial killer hadn't ended so well for me.

Maxim's humming jumped up an octave.

I straw sucked in more air—that was the only way deep breaths didn't hurt—and let it hiss out between my teeth. "Why do you need a mixer?"

"I want to make something."

Ever since I'd come home from the hospital, he'd decided he should feed me. Except, the last time he'd cooked had been sometime back in the 1700s when his family ran a small inn in the Swiss mountains. I didn't know what people ate back then, but in the modern day United States, my main food groups were takeout and...well, more takeout.

Say what you will about DC politics, but note that no one ever dogs the food. The world's diplomats brought their cuisines with them, and my absolute favorite thing to do in the city was trying food from a place I'd never been.

Ethiopian was my go-to. The flavor was similar to Indian, but instead of naan, there was this soft, almost velvety bread that you wrapped around gloriously spiced meat. Thai food was great for clearing out sinuses after a cold, and DC had Italian food so good it made Italy cry with jealousy.

"Melia?" Maxim came to stand in front of me, which given the size of my dinky apartment, meant he only had to take two steps.

"Hmm?" I forced my eyeballs up and in the direction of his face, struggling to focus. The latest pain pill had finally hit my system. I felt fuzzy and distant, like being alive was just a bad dream.

Maxim looked dashing, as always. He had blue eyes that ranged from aquamarine to midnight blue depending on his mood, and dark hair that had the tousled sexiness of an action hero. He wore black jeans paired with a tight, body skimming button-down shirt, the long sleeves rolled up to his elbows, as if he planned to get his hands dirty.

"The mixer. Do you have a mixer?" He spoke slowly, carefully enunciating every word.

That made me frown. I wasn't stupid; I was high. Legally high and I wanted to enjoy it. Damn him. "No. I don't have a mixer. Why do you want a mixer?"

"I was going to make muffins." His expression grew sheepish. Even he knew how ridiculous that sounded coming from him. A vampire baking muffins was a lot like Martha Stewart sucking blood.

The idea of Martha Stewart guzzling blood from someone's neck made me laugh, though. Thanks to the drugs, it wasn't a short, quick laugh, but rather a long, jolly interlude of gigglery. Mostly because I couldn't feel my ribs just then. And no, gigglery wasn't a word, but I was high and making it up as I went.

Not that vampires sucked blood. Well, they did, but only in the beginning. Eventually they transitioned to feeding off psychic energy. The ones who couldn't make the jump from blood to psychic energy ended up like my last serial killer—insane and on the kind drinking binge that left a trail of bloodless bodies.

Maxim heaved a sigh and schooled his face into a more imperious expression. One that spoke of authority and a higher station. He'd mingled with nobility once upon a time and sometimes it showed. "You need to eat, Melia. Your body can't heal and sustain me at the same time."

"I ate." I pointed with my chin to the takeout container on the table next to me.

"That was yesterday." He put a hand on his hip and scowled at me.

I blinked. Yesterday? Really? Had I lost that much time? I tried to remember. My life was a blur of pills, pain, cable television, ignoring Maxim, and dealing with Dodd's petulance—the FBI had saddled me with his training. In between, I slept.

When had I last eaten?

Narrowing my eyes, I strained to bring the takeout container into focus. I'd had Thai from the looks of the red lettering on the exterior of the carton. I'd eaten it while watching a Sci-Fi special on aliens among us. What day had that been? What day was today? Damned if I knew.

I shrugged, giving up. "I'm not hungry."

Maxim gestured to the pill bottles keeping my takeout company. "These medicines aren't helping you." He reached out to snatch up the bottles, but I got to them first. Sometimes my drugged reflexes fired at the correct speed, although it always surprised me. Like seeing a dead snail come back to life and become a champion sprinter.

Tucking the bottles next to me in the recliner, I glared at him. Don't mess with my happy pills. I won't be happy.

"Fine." His voice snapped like a rubber band. "But you have to eat."

I waved my good hand—the other one was in a cast from wrist to elbow—toward my takeout menu collection. I kept them all in a little basket on top of the fridge. "Order something."

He took down the basket and went through the menus, looking more and more disgusted as he did so. "It's all junk, Melia. You eat like the world's largest woman with a death wish."

"What does it matter?" I pointed to him and then at myself. "You said I wouldn't age or die." That had been his main selling point when he first approached me. It felt good to throw it back in his face. I'd bonded with him out of desperation and quickly learned staying alive wasn't as easy as he made it out to be.

Exhibits A, B, C and D: my broken arm, broken ribs, a collapsed lung, and a touch of internal bleeding for extra fun. Oh, and let's not forget exhibit E: the part where I'd almost killed my partners because I'd been slow to believe vampires were real. My co-agents, Jim and Dodd, still didn't know how much danger I'd put them in. There were a variety of good reasons for that, but also because I had no idea how or what to tell them.

For the record: there might be a million rumors about UFOs covered up by the government, and endless conspiracy theories about Bigfoot and psychics on the payroll, but for all that, the FBI offered no training on what to do when reality went batshit.

And no one knew but me...and Maxim, my new live-in vampire.