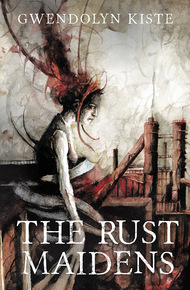 Gwendolyn Kiste is the Bram Stoker Award-winning author of The Rust Maidens, from Trepidatio Publishing; And Her Smile Will Untether the Universe, from JournalStone; the dark fantasy novella, Pretty Marys All in a Row, from Broken Eye Books; and the occult horror novelette, The Invention of Ghosts, from Nightscape Press. Her short fiction and nonfiction have appeared in Nightmare Magazine, Vastarien, Tor's Nightfire, Black Static, Daily Science Fiction, Unnerving, Interzone, and LampLight, among others. Originally from Ohio, she now resides on an abandoned horse farm outside of Pittsburgh with her husband, two cats, and not nearly enough ghosts. Find her online at gwendolynkiste.com

The Rust Maidens by Gwendolyn Kiste

Something's happening to the girls on Denton Street.

It's the summer of 1980 in Cleveland, Ohio, and Phoebe Shaw and her best friend Jacqueline have just graduated high school, only to confront an ugly, uncertain future. Across the city, abandoned factories populate the skyline; meanwhile at the shore, one strong spark, and the Cuyahoga River might catch fire. But none of that compares to what's happening in their own west side neighborhood. The girls Phoebe and Jacqueline have grown up with are changing. It starts with footprints of dark water on the sidewalk. Then, one by one, the girls' bodies wither away, their fingernails turning to broken glass, and their bones exposed like corroded metal beneath their flesh.

As rumors spread about the grotesque transformations, soon everyone from nosy tourists to clinic doctors and government men start arriving on Denton Street, eager to catch sight of "the Rust Maidens" in metamorphosis. But even with all the onlookers, nobody can explain what's happening or why—except perhaps the Rust Maidens themselves. Whispering in secret, they know more than they're telling, and Phoebe realizes her former friends are quietly preparing for something that will tear their neighborhood apart.

Alternating between past and present, Phoebe struggles to unravel the mystery of the Rust Maidens—and her own unwitting role in the transformations—before she loses everything she's held dear: her home, her best friend, and even perhaps her own body.

Hand in hand, we moved through the shadows of the neighborhood. The two of us always took the long way: down my side of the street, around the end of the cul-de-sac, and back up the opposite side. As we went, we indulged our superstitions, avoiding all the many cracks in the crumbling sidewalk, our fingers tapping the fire hydrant at the end of the street, holding our breath past the abandoned Frank Lloyd Wright-style mansion.

We ended, as we always did, at the empty house next to Jacqueline's. Three winters ago, the bank had seized the property, apparently with the sole intention of letting it rot away. A warning for what would happen if you were foolish enough to lose your job.

What they hadn't seized was the spare basement key the former owners had kept hidden outside. Next to a piece of half-rotten lattice in the untilled garden, I uncovered the toothed silver, and we let ourselves in to a house that belonged to no one.

Downstairs, everything was as we'd left it. Two crooked lawn chairs we'd salvaged from a long-ago Wednesday garbage pickup, a dusty bottle of Old Crow bourbon, and a Coleman lantern that was liable to gas us to death if we weren't careful.

"Don't turn it up too high," Jacqueline said.

"I won't." If we were lucky, we could get the fuel to last us the whole summer.

She and I sat together in the lawn chairs, giggling and celebrating and tossing back shots quick so we didn't have to taste them.

"I'll miss this," she said, and I almost corrected her, almost reminded her that there would be nothing to miss. That I'd be back every weekend, just like I promised.

But then she looked past me, and something shifted in her face.

"Phoebe," she whispered, nearly gagging on my name.

My throat closed up as I followed her gaze. The lantern glow flickered over a shape at the bottom of the stairs. Someone was standing there, watching us for longer than we cared to imagine.

With a guttural moan, Jacqueline fumbled for my hand, anything for us to be closer to each other and farther from this thing gawking at us.

Her arms still bandaged and damp, Lisa emerged as if from nothing. "The moonlight's singing to us tonight," she said, and her fingernails dragged across the crumbling walls. This set my guts churning. Something about the sound made me think of a corpse digging its way out of a shallow grave.

I braced against the crooked lawn chair, and it lurched under my weight. What was she doing, hiding here in the dark?

"Lisa?" I said, but she didn't look at me. Instead, she moved into the center of the room and settled on the floor, stretching her long legs out across the cold concrete.

Our hands still locked, Jacqueline's gaze shifted from Lisa to me and back again.

I sniffed in a heavy breath, and the scents of mildew and faded Lysol filled my lungs. Stay calm, I told myself. After all, this wasn't a specter or even a stranger. It was Lisa. We'd known her since grade school. An odd one, to be sure, but she was only a girl, just like us. Besides, this wasn't so odd. We'd left the door at the side of the house unlocked. She must have slipped in after us. Still, neither Jacqueline nor I had heard her come down the stairs. How could she move without making a sound?

I shrank back in my chair, desperate to pretend this was normal. "Congratulations on graduating today," I said. "How's everything with your family? How's your sister, Kathleen?"

Jacqueline attempted a smile. "Yes, how is Kathleen? Is she still at the Chicago Tribune?"

Her eyes vacant, Lisa stared at the wall, not seeing us, maybe not seeing anything.

Jacqueline tightened her fingers around mine, squeezing my hand until it throbbed. I knew what she was thinking. We should run. Tethered together, we could sprint for those stairs and get out of here before something happened.

I tried to steady myself, but my voice trembled anyhow. "Do you need us to call someone, Lisa?"

At this, she looked up, and her eyes flashed before going dark again.

Lisa rose to her feet, somehow taller than only a moment ago. Shadows danced about the room. Maybe hers. Maybe not. We watched, dumbfounded, as she fiddled with the gauze on her arms, carefully at first, until a strange look twitched across her face. Then with her gaze on me, she smiled and ripped off the damp bandages. They peeled away from her body like dead flesh. Instantly, water gushed out of her, as though someone were wringing out a sponge.

I sat there, my insides twisted up and useless. I couldn't move. I couldn't breathe. But Jacqueline was quicker than me, and smarter too, like she practically knew it was coming. Her hand on mine, she yanked me backward out of the chair and pulled us toward the wall, but nowhere in the room was safe. The gray liquid kept coming, kept seeping down Lisa's body, spilling on the concrete in thick rivers, coating the toes of our shoes.

"Don't worry," Lisa said and wandered back toward the stairs, her leaking body making plink-plunk sounds as she went. "I'm fine. Everything is fine."