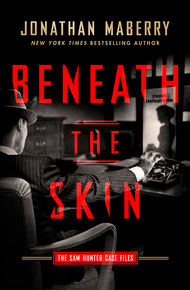 Jonathan Maberry is a New York Times bestselling author, 5-time Bram Stoker Award winner, 3-time Scribe Award winner, Inkpot Award winner, and comic book writer. His vampire apocalypse book series, V-WARS, was a Netflix original series. He writes in multiple genres including suspense, thriller, horror, science fiction, fantasy, and action; for adults, teens and middle grade. His novels include the Joe Ledger thriller series, Bewilderness, Ink, Glimpse, the Pine Deep Trilogy, the Rot & Ruin series, the Dead of Night series, Mars One, Ghostwalkers: A Deadlands Novel, Kagen the Damned, and many others. He is the editor of many anthologies including The X-Files, Aliens: Bug Hunt, Don't Turn Out the Lights, Aliens vs Predator: Ultimate Prey, Hardboiled Horror, Nights of the Living Dead (co-edited with George A. Romero), and others. His comics include Black Panther: DoomWar, Captain America, Pandemica, Highway to Hell, The Punisher and Bad Blood. He is a board member of the Horror Writers Association, president of the International Association of Media Tie-in Writers, and the editor of Weird Tales Magazine. Visit him online at http://www.jonathanmaberry.com.

Beneath the Skin by Jonathan Maberry

Sam Hunter is a PI in the big bad city. When he takes a new case it's like he's accepting the client into his 'pack'. And Sam will do anything to protect the members of his pack. Dogs are like that. So are wolves. And so, too, are werewolves. Like Sam. Sam is one of thebenandanti, an ancient race of werewolves who fight evil. And evil comes in all shapes and sizes; and it comes at people from all directions.

The cases Sam takes range from saving the world from genetically-engineered super soldiers to saving a young boy from the very real monster in his closet.BENEATH THE SKIN: The Sam Hunter Case Filesgather together the weird, strange, funny, heartbreaking and disturbing adventures of a low-rent private investigator taking on very odd jobs. These stories include cameos by fan-favorite characters from Maberry's bestselling Joe Ledger thrillers and The Pine Deep Trilogy.

Except from STRIP SEARCH

I got up and crossed to my file cabinet, opened the bottom drawer, and took out the only bottle of really good booze I owned –an unopened bottle of Pappy Van Winkle's 23-Year-Old bourbon. At two-hundred and fifty dollars a bottle it was way out of my price range, but a satisfied client had given it to me last Christmas. I brought it and two clean glasses back to my desk, and the woman watched while I opened the bottle and poured two fingers for each of us. I didn't ask if she drank. She didn't tell me to stop pouring.

I sat down and we each had some. We didn't toast. You don't toast for stuff like this.

The bourbon was legendary. I'd read all about it. It's aged in charred white oak barrels. Sweet, smooth, with a complex mix of honey and toffee flavors.

It might as well have been Gatorade for all I could tell. I drank it because my laptop was still fanning through the images. And because that, even if I didn't take this case, those dead women were going to live inside my head for the rest of my life. You can forget some things. Other things take up residence, building themselves into the stone and wood and plaster of the structure of your mind.

I suppose if I was capable of dismissing this, or forgetting it, then I wouldn't be who I am. Maybe I'd be happier, I don't know.

I closed the laptop, finished the bourbon and set my cup down.

The woman opened her purse again and removed another envelope. She placed it on the desk and slid it across to me. When I opened I could see the glossy border of a photograph. I hesitated, not wanting to see another mutilated girl. But I was already in motion in this, so I sucked it up and slid the photo out of the envelope.

It was another girl.

Unlike the others, this one had still had her skin.

She was a beautiful teenager, with bright blue eyes and a lot of curves that were evident in the skimpy costume she wore. A blue glitter g-string and high heels.

"Her name is Denise Sturbridge," said the woman. "She's only fifteen, which makes her the youngest of the women in question, but as you can see she looks quite a bit older. She's a runaway from Easton here in Pennsylvania. Abusive father, indifferent mother. Pretty common story, and very much in keeping with the backstories of the other girls. She took off four months ago, got picked up by the kind of predator who trolls bus stops and train stations. He got her high and turned her out to work conventions. She was scouted out of there to work in a gentleman's club near the Philadelphia airport. Fake I.D. that says she's nineteen. She dances under the name of Bambi."

I set the photo down.