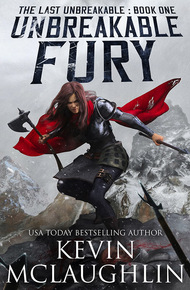 While the Unbreakables lived, the Kingdom of Essex was unbeatable. But they're all gone now, slaughtered in an ambush.

Jirel escaped the massacre, fleeing with her infant daughter to live out the rest of her life in hiding. She put aside her weapons. War was in her past.

But fate has a way of stepping in to change our plans. When an old foe arranges treasonous attacks, Jirel's daughter is kidnapped. She sets out to rescue her child and begins an epic war which will rock the world to its foundations.

The wind still sent nothing but the crisp scent of pines to her nose, but the sudden silence in the forest around Jirel screamed that something was wrong. For someone who spent as much time out in the wilderness as she, the absence of noise was like an alarm bell.

She set down the axe she was carrying, leaning it against the tree she'd just felled. It would only get in her way, anyway. Then she stilled her thoughts and centered her weight over her feet. Jirel wasn't sure which direction the attack would come from, but she felt certain it would be soon.

It was just as well she was out there alone. Without anyone else around, she was free to act without worrying someone might recognize her for who she was. Jirel reached out with her mind to touch the golden well of energy always waiting for her need. She grabbed some of that power and channeled it down across her skin.

The horse pulling her cart whinnied. She sensed something wrong, too. Jirel went to him and patted his side while making sure the ties holding him in place were firm. If the horse ran off she'd need to spend time hunting her down, and that would be annoying.

"Easy, Hayfield," Jirel said. She still found herself smiling every time she said the name her daughter had picked out for their horse. "I've got this."

Hayfield whinnied again but settled somewhat. The rope would hold him even if she tried to bolt, so that left Jirel free to deal with their uninvited guests. She checked her connection to her magic. It flowed through her as strongly as ever. She was ready.

"You might as well come out," Jirel called. She scanned the woods around her for movement. "So we can get this over with."

The attack came from behind her. They fired an arrow first. It flew true and slammed into her back right between her shoulder blades. It shattered rather than piercing her skin, but Jirel grunted with the impact. She used it to help her spin around and face the threat.

Three Remnants screamed as they rushed her. They wore nothing but tattered rags, but the clubs in their hands were covered with sharp spikes crusted with some disgusting black material. Jirel had fought these things enough times to know that wounds from those things could turn bad easily, but she wasn't worried. None of them were going to wound her.

"You picked the wrong person to attack, friends," she called out.

The first one was on her then, leaping in with his club held high overhead to smash down on her. He shouted a battlecry she couldn't understand as he brought the weapon down toward her head. Jirel swung her left arm up and took the blow on her forearm. She felt the pressure of the strike but no pain. The energy flowing through her body hardened it against simple attacks.

"You'll have to do better than that," Jirel growled, stabbing out with her right arm, fingers held together like a spear-tip.

The Remnant's war-cry turned into a gurgling scream as her hand shot into his chest, punching through clothing, skin, and bone like it had been a real weapon. It was dying before she withdrew her arm. Jirel let it drop to the ground as she turned to face the other two adversaries.

They'd seen what happened to their brother and came in more carefully, splitting up to attack her from two sides. Jirel's eyes narrowed as she considered her best options for finishing this fight quickly. The Remnants were brutish, but they had cunning. She could use that against them.

She feinted a rush at the Remnant to her right, hollering as loud as she could manage. It jumped backward, almost stumbling over the tree she'd just felled. But he wasn't her real target. She just wanted him moving away from her so she could deal with the other one.

As expected, the foe on her left had fallen for the ruse as well, rushing in to attack her from behind. She whirled in place, striking out with her right leg like a whip. The kick hit the Remnant with hammer-like force. Jirel heard bones snap. It still managed a swing that she took on her right shoulder. The blow bounced off like it had struck plate armor.

Then she slashed out with her right arm, taking the Remnant's head off.

While its body was still collapsing to the ground, she was already turning back to the last Remnant. He saw death in her eyes and turned to flee. But flight wasn't possible now. There was no way she could allow him to escape, not now that he had seen what she could do. Too much was riding on secrecy, and she couldn't let even the hint of a rumor get out.

Jirel rushed forward with unearthly speed and closed with it before he managed three steps. He hadn't expected her to move so fast. How could he? He'd never seen someone like her before. Few alive had.

A quick slice of her arm slashed the Remnant's head from his body. He crumpled to the ground. She flicked her arm, trying to cast off the blood. Most of it slid off her skin as easily as the weapons had, but her clothes were a mess. She'd need to clean up before heading back to town, and the thought of frigid mountain streams didn't make her happy.

"Damn it. I hate being cold," Jirel said. She glanced down at the three bodies, then stalked through the woods, making sure there were no more of them out there. They probably would have already attacked if there were. Remnants were not known for subtlety. But it was never good to take chances.

Her quick search turned up the crude bow they'd used to shoot at her. Jirel snapped it over her knee and cast the thing to the ground. There were no signs of other attackers, so she went back to the tree she'd felled, thinking over the attack. Her skills were getting rusty. Time was, she'd have been able to drop all three in seconds. Her reactions were off, her form sloppy. But then again, she didn't have much call to practice these days. Most of the time Jirel kept her power completely under check.

It was still difficult sometimes to remember not to call that golden energy. It felt so natural to have the power flow across her skin. That way of thinking was dangerous. Deadly, even. Her position was too precarious to allow a lack of restraint to kill her now.

Jirel picked up the axe and tossed it into the back of her cart. She'd already drawn in magic, she might as well use it at this point. A little focus brought power flowing down through her arms, turning her wrists and hands as hard as steel. She narrowed the energy to a sharp edge and brought her arm down, snapping a branch free from the trunk. It felt good to cut this way. She rarely allowed herself to use her magic. It had been so long since the last time that she'd almost forgotten how right it felt.

Chopping the limbs from the trunk was quick work. Slicing the trunk into lengths that would fit in the back of her cart took a little longer, and she was drenched with sweat by the time she was finished the work, but she was exhilarated as well. The magic left her feeling more alive than ever.

Letting go of her grip on the golden power was hard. That was why she used it so sparingly, as much as any other reason. It felt good. The more she used magic, the harder it was to let go of the power and return to being just Jirel. Using magic reminded her that she was so much more than that. She was an Unbreakable.

"Was one," Jirel muttered under her breath as she released her hold on the magic and let it flow away. "Not anymore."

Not ever again. That was another time, better forgotten.