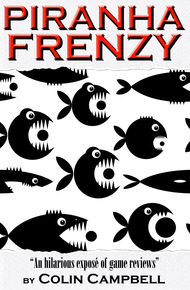 Colin Campbell is a video game journalist based in Santa Cruz, CA. He has worked for multiple games magazines and websites, serving as a writer, editor and publisher.

He is the recipient of the 2011 Games Media Legend Award and the 2012 Good Games Writer of the Year. Colin currently works as a senior reporter for Polygon. More @colincampbellx.

Kjersti's bosses, the game's fans and even her partner are pressuring her to deliver a high score. But there's something about this game that is deeply troubling. Her investigations and actions over the next few hours will change her life, and the world of gaming, forever.

Piranha Frenzy looks at the shady world of big games journalism, where money is often more important than ethical standards.

Already well-known as a video game journo, Campbell's first work of fiction is set in the world of game journalism and publishing - definitely close to home! It uses his own knowledge of the biz to puckishly develop a story that comes at the odd relationships between the public, media, and publishers in a playfully cutting fashion. – Simon Carless

Sheldon orders the two biggest steaks in the kitchen, a side of fries and a Coke. Brad earns a look of contempt from his boss when he orders a Greek salad and a glass of water.

"Thou shalt consume the noble flesh," says Sheldon, holding his hand up in monkish pose. "In order that thou will survive the perils ahead." He dips a French roll into a bowl of olive oil.

Brad smiles weakly, and this reassures Sheldon that his subordinate is suitably worried about the meeting. The sunglasses have been stowed away, Sheldon notices. Brad's eyes are small and pale.

It has been Sheldon's habit, for some years, to fire his unwanted EICs at lunch meetings. He finds public spaces more convenient for getting rid of senior staff, once they have outlasted their usefulness. It is always interesting to see how people react when they are given bad news in public.

In the decade since he held the position himself, Sheldon has fired eight EICs. Usually the news has come as a surprise to his victims.

This one though, Brad, will not be fired today. He is proving much too useful as a gofer for Sheldon. An EIC who just does what he is told, without endless inconvenient questions and caveats, is a rare thing.

Brad looks troubled. "I asked for the copy on my desk at 12, but still nothing." He checks his phone, in vain it turns out, for an incoming email from Kjersti.

Sheldon enjoys Brad's use of the phrase "on my desk," the proprietorial sense of ownership, the illusion of power and permanence it suggests. But he does not enjoy the discomfort of knowing that he will be meeting with Saturnine's marketing boss Alejandro Bernal in a few hours, to discuss budgets for the year ahead, coupled with the possibility, however remote, that the encounter will be rendered unproductive by a less-than-glowing review of one of the year's biggest games.

"Forget the copy," he says. "What I want to know is the score. Just the number."

"Kjersti is being mysterious."

"I don't get it," says Sheldon. "She loves this series. She gave Satanic Realm 4 an 85%. She's dating the guy who is marketing the damned thing. What is she waiting for?"

The drinks arrive. Sheldon takes his time enjoying a slurp of Coke.

"Not really, Brad. No. I don't know how she is, nor do I give a fuck. What I do know is that if the score is going to be higher than, say, 83, we could have made Saturnine's ad buyers aware of this happy fact 24 hours ago…"

"Sure, sure," says Brad, nodding, looking down at his napkin.

"And they would have given us at least a few hours exclusive on one of the biggest articles of the year, yielding some much-needed traffic, the very thing that you, Brad, are paid to produce. Right now, we would be splashing merrily in a running river of traffic and I would be festooning you with 'ataboys.' But that hasn't happened."

"Kjersti," says Brad, making a slight movement of his hands, indicating frustration, "she is one of those who doesn't believe in exclusives and refuses to give out her score before copy submission. She says it leads to corrupt practices and in this, perhaps, she has a poi…"

"Her score?" hisses Sheldon. He feels a familiar rage against these precious scribblers. "She does not own the review. I do… I mean… Piranha Frenzy does. We need to know what the score is, well in advance, so we can monetize it as effectively as possible. I am sure I have already asked you to get a grip on this, Brad. This is the way we do business, and it is not Kjersti Wong's job to frustrate this process."

"Yes, but, I think, the tide is turning against this—the readers are very suspicious of exclusives."

The food arrives. Brad moves cutlery and his glass to make room for the plates. He glances up, and looks afraid.

"A few losers on the forums may have a problem with the way the world turns," says Sheldon, slicing into one of his steaks. "But they are not our concern. They do not number the million or so people who will read this review in the next twenty-four hours, or the million or so extra people who would have read it, had we stolen a march on our rivals, but who will instead read it on RPS or Polygon or Eurogamer."

He glares at Brad, chewing furiously. "I am not going to sit by and watch us lose readers, and money, because of a few whining bitches on Twitter."

"And none of this answers my question, which is, what is the review score that we are giving, in a few hours time, to Satanic Realm 5?"

Brad plays with his Greek salad.

Sheldon has a memory of a fantasy novel he enjoyed a few years back, in which the dead exist in a place of nothingness, a gloom of despair that offers a constant, painful glimpse of the joy of living. By some power, they are allowed to escape, back to the world of the living, away from the suffering of nonexistence.

This, in Sheldon's view, is Brad's career. He was an unspectacular reviewer for a range of moderately successful outlets before being loosed into the void by one of the sweeping plagues of layoffs that regularly descend upon game journalism. He had then taken some miserable job as a community manager on an MMO. And there he had floated, for years, disconnected from the thrumming vibrations of journalism, dealing with the horror of PR people as demanding superiors rather than as supplicants, dealing with consumers as righteous customers rather than as readers and fans.

Sheldon saved Brad from this purgatory. Fresh from firing the last EIC, who'd suffered from the delusion that Piranha Frenzy required "improvements," Sheldon had been in the market for someone with the quality he most required: acquiescence. And boy, had Brad delivered. The poor fool lived in a state of constant terror that he might, at any stage, be sucked back into the void. Community management and the non-career that followed was a mere flick of a finger away. They both knew it.

Satisfied that there will be no answer to his question, Sheldon continues with his lunch.

"We are not making as much money as we need to be making. We are losing audience. There is too much at stake here." He stops for a moment, regards the piece of meat on the end of his fork, and waves it at Brad. "Steak. Geddit?"

Brad smiles, seems to appreciate the opportunity to speak.

"I take your point. I really do. I'll work on it. But as far as Satanic Realm 5 goes, we haven't actually made any guarantees to Alejandro. We were clear to him. Church and state. No guarantees. That would be wrong."

"That would be wrong," nods Sheldon, speaking very quietly, a wave of pure rage sweeping through him, as he swallows a slightly-too-large chunk of beef. "Are you a fucking moron, Brad?" He feels the anger biting, remembers what he has been taught about self-control. "I'm sorry to be blunt," he says. "Alejandro agreed to spend $1.5 million of Saturnine's money, advertising on our site between now and the end of the

year, with a further $1 million up for grabs in a meeting to be held…" Sheldon theatrically regards his watch, "in a few hours' time."

Brad tries to interject, but Sheldon holds his hand up.

"You can see why I am upset. There were certain expectations agreed upon, unspoken agreements that a man of common sense would understand."

"This is the money that is going to keep me and you, Brad, in work for the rest of the year. We made no guarantees because it would be wrong to do so, but also because there is no need to do so. Satanic Realm 5 is a stand-up game that many people will enjoy very much. It merits a good score. But now I begin to worry that Kjersti might be deciding, in her boundless wisdom, to not give it a good score.

"And so, talking of things that are wrong, I worry that you made the wrong decision in giving this game to her to review, when you could just as easily have done it yourself, understanding, as I'm sure you do, the sensitivities here."

Brad nods. He is pale now. "She seemed so right for it," he said. "Yes. I made a mistake. I've been super busy. I should have just handled this. But, she reviewed last year's game and she liked it and she insisted. As you say, there's the thing with Alejandro and her, which has got to be worth a few percentage points. Maybe… she's always a bit secretive about her reviews, even when they are positive. I don't think we need to worry too much she…"

"You're babbling now, Brad," says Sheldon. "Calm down. Eat your salad." Sheldon takes some comfort in the probability, as he sees it, that Kjersti is just playing out, and will score the game at 85% or above.

"We have been doing this a long time now," he says, feeling a calmness return. "One of the reasons we're still here, why we're still on top, is because we keep doing the stuff that people like, the stuff that they want, and, as far as possible, we don't change that. The delivery might have changed, more videos, more wikis, whatever, but the format stays the same. You like games. We like games. Buy more games. Everyone is happy."

Brad does not look happy.