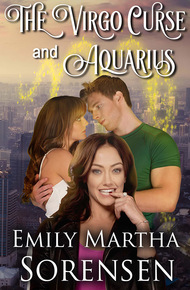 The Virgo Curse and Aquarius by Emily Martha Sorensen

Lucy didn't want to spend her high school years with a curse hanging over her head, but she doesn't have much choice. She's just inherited the Virgo curse, and it's a big one.

Cursed to die within twenty years. Cursed to have her mind messed with magically. Cursed to have all the boys at school fall in love with her, including the very cute troublemaker Xander.

Well, maybe it's not so bad to be cursed.

Amanda's just inherited the Aquarius curse, and with it the power to see people's souls. She falls in love with Alex because his is the most beautiful soul she's ever seen.

Alex and Xander live under the shadow of the Gemini curse, awaiting the time when it will twist their personalities and then kill them. Amanda is a shining beacon of joy, the first hope in the dark of Alex's night. She might just be a future worth living for.

Virgo, Aquarius, Gemini, and more . . . is there room for love in the face of a fate that threatens to cut their lives short?

Paranormal romance usually features vampires and shifters, so I wanted to write about something new: a magic system that changes personalities. When the mind of the person you love the most is in danger of being changed against their will . . . well, the stakes don't get any higher than that. – Emily Martha Sorensen

A roar passed by her, and a motorbike stopped at the curb.

"Hey, Lucy!" said a guy in a helmet. He removed it, and a familiar face appeared from underneath. "Nice to meet you!"

"Alex?" Lucy said, baffled. This seemed unlike him.

"Oh!" Lucy snapped her fingers. "You're his twin, Xander! Your parents were super uncreative and gave you almost the same name!"

"That's me!" He reached into a bag by his side and pulled out a second helmet. "Here. Hop on."

Lucy stared at him. "You must be joking."

Lucy stared at him flatly. "I've heard about you from Alex. I don't trust you."

"What've you heard?" he asked easily.

"He knows what you think!" Lucy exclaimed. Always being able to read his twin's mind was the Gemini's power.

"Doesn't mean he understands me." Xander tossed the helmet up in the air and caught it. "If your parents could read your mind constantly, would you think they understood you?"

Lucy shuddered at the idea. If her overprotective father could read her mind, he'd never let her out of the house. "Nooooo."

"There ya go." Xander held out the helmet and grinned.

"That doesn't mean I trust you!" Lucy retorted. "I've never met you before!"

"Exactly," Xander said, his eyes glinting. "That's the whole problem I'm trying to fix. C'mon. You like me, don't you? I can tell because I've got a real thing for you."

Lucy coughed and tossed her hair to stall for time. It hadn't occurred to her that a guy who knew about her power would understand what it said about her feelings.

"Well, maybe I do," she said coyly. There seemed no point in lying when he knew for a fact she did. The fact was, he was just as attractive as Alex, and she liked his flirtatious manner way more than Alex's quiet brooding. "But I'm not getting in a vehicle with a guy I just met. Especially without my dad's approval."

She had no interest in being grounded for the rest of her life if her dad found out about it.

"Okay, fine." Xander plopped on his helmet and drove off.

Lucy felt oddly crestfallen, watching him disappear around the corner. Really? That's it?

She shook her head, adjusted her backpack, and told herself to forget the odd conversation as she kept on walking down the hill away from the school. She reached the bottom of the hill and waited for the crosswalk sign to light up. It was taking forever.

Loud footsteps came running behind her.

She spun around to see Xander jogging to catch up to her.

"I parked it at the school parking lot!" he called, catching up to her. He barely even panted to catch his breath, which implied he was in great shape. She liked guys in great shape. "If you won't let me drive you, I'll walk you home."

Lucy couldn't stop herself from grinning. That . . . was kind of adorable. "Okay, fine. If you insist."

With triumphant glee, Xander linked his arm through hers as the crosswalk light changed. They headed across the street.

"So, where should we go?" he asked casually.

"I assume my house, since you're walking me home."

"No, no, no, don't be boring. We should stop somewhere on the way. I know a great ice skating rink."

"That would make this a date, and this isn't a date."

"Who says?" Xander asked with a gleam in his eye.

Xander looked a little sulky. "Well, we'll have to convince your dad I'm a prize specimen, then."

Lucy giggled at the petulance on his face. "First you'll have to convince me. I'm still not sure I trust you."

They were nearing Brudger's Ice Cream Heaven, where a lot of students hung out after school.

Lucy considered that for a moment. It was a possible date spot, but it was also a spot where you could just hang out with a friend. She'd been here quite a few times with Natasia, Jezza, Matilda, and Carrie. "Okay."

They went inside and waited at the end of a long line. The booths inside were pretty crowded, like they usually were after school.

Xander pulled out a coin and started to flip it.

"Picking a flavor. I always pick randomly." He caught the coin and looked at it. "Tails. Okay, now for the next digit."

"Yep," Xander grinned. "There are sixteen flavors. Perfect for assigning them numbers in binary and flipping a coin to pick."

That sounded suspiciously like math, which Lucy wanted to have nothing to do with. She made a face.

"C'mon," he laughed. "It's way more fun than you'd think. Surprise is the spice that makes boring things delicious."

"Ah, but it can always be more interesting." Xander tossed the coin in the air again. "Life's only an adventure when you make space for randomness."

"Okay, pick randomly for me, too," she said impulsively.

Xander grinned. "I knew there was a reason I liked you."

Lucy's lighthearted mood vanished. "There is a reason, and it's not as innocent as love at first sight."

"We're not 'together'!" Lucy insisted.

Lucy did her best to hide a smile. She didn't want to encourage his cockiness, but the fact that he was so sure of himself was fun. She felt like she didn't have to worry about bruising his ego, unlike some guys, who were super fragile.

Plus, it was really, really nice to meet a guy who knew about her power and even consented to it using itself on him. Sometimes it really bothered her that she never knew if a guy's feelings were real or fake. At least with Xander, it didn't matter, because it was the same to him either way.

"Hope you like pistachio with almond slivers," Xander said as they got to the register. "'Cause that's what you're getting."

"Fine, but only if you're paying. I have no idea if that'll be good or not."

"Twist my arm," Xander grinned, taking out his wallet.

Oh, wait! Lucy realized. If he pays, that means this is a date!

"Never mind," she said hastily, scrambling in her jeans pocket for her wallet. "I'll pay for my own —"

"Well, it's still not a date!" Lucy protested.

The guy behind the cash register looked very amused as he swiped Xander's card.