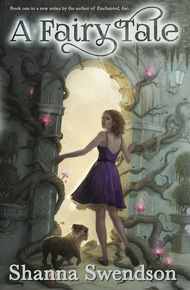 Shanna Swendson earned a journalism degree from the University of Texas but decided it was more fun to make up the people she wrote about and became a novelist. She's written a number of fantasy novels for teens and adults, including the Enchanted, Inc. series, the Fairy Tale series, the Lucky Lexie Mysteries, and the Rebel Mechanics series. Her books have been translated into multiple languages around the world. She devotes her spare time to reading, knitting, and music. Visit her website at shannaswendson.com.

A Fairy Tale by Shanna Swendson

Once upon a time, a girl named Sophie Drake danced with the fairies in the woods behind her grandparents' Louisiana home. But she closed the door to the fairy world and turned her back on the Fae when they tried to steal her little sister Emily. Fourteen years later, Sophie heads to New York City on a desperate mission. Emily, now an up-and-coming Broadway actress, has gone missing. Only Sophie suspects the Fae.

Now Sophie has her work cut out for her. Emily's abduction is part of a larger plot involving the missing Queen of the fairy realm. An upstart fairy is making a bid to assume control of the entire Realm, unite the fairies, and become master over the human world. To free her sister, Sophie must derail this power scheme and find the true Queen of the Realm.

That's a lot for a small-town ballet teacher to tackle, but with the unlikely aid of her sometimes flighty sister, a pair of elderly shopkeepers with a secret, a supremely lazy (but surprisingly knowledgeable) bulldog, and a wounded police detective searching for his own missing person, she just might prevail – if she can force herself to confront her own past and face her true nature.

Shanna Swendson is one of my favorite authors. From the charm of her Enchanted Inc. series to the joy of Rebel Mechanics, every book she's written is a delight. – Emily Martha Sorensen

Olivia tried to flag down a taxi, but it passed them by. "You'll be sorry when she's famous!" Will shouted after it.

Laughing, Emily struck a haughty pose and added, "Yeah, don't you know who I am?"

The next two cabs that came by were occupied. "We may as well hoof it uptown," Olivia said. "Then we'll be heading in the right direction if another cab comes along."

The strange silver-haired man had left the diner around the same time they had, and he'd made no move to hail a cab for himself or to walk away. He approached them. "If you are planning to walk uptown, would you mind if I joined you?" he asked. "I do not believe it is prudent to walk alone at this time of night. I read the newspapers. I know what can happen."

Emily and her friends glanced at each other. This wasn't a city where it was wise to trust strangers at any time of day, no matter how polite they were. As if sensing their doubts, he smiled and spread his hands helplessly. "The three of you outnumber me," he said. "I believe I am more at risk in trusting you than you are in trusting me."

"Well, come on, then," Olivia said with a shrug and a wry glance at Emily as she started walking. "Home isn't getting any closer with us just standing here."

As they walked, Emily studied the man out of the corner of her eye. Olivia was right; he was cute. He was definitely a fixer-upper, but with raw material like that, it would only take one good shopping trip to make him more than presentable. Granted, he was a little strange, but not in a creepy way. It was more like he was unearthly, from some other time or place. Based on his wardrobe, Emily guessed that he might be an academic who seldom left his ivory tower. Not her usual type, but variety was the spice of life.

The man hesitated, then finally said, "I am called Eamon."

"Thank you for coming to our show, Eamon," Olivia said.

"Do you think our Emily's going to be a huge star and forget all her friends?" Will asked.

Any normal person would have said something like, "Of course she'll be a huge star, but I doubt she'll forget her friends." Eamon said, "They do often forget," his voice solemn and mournful.

"Okay!" Will said in a "changing the subject now" tone. He, Olivia, and Emily continued chatting about the show as they walked. Eamon listened attentively, smiling as though he enjoyed hearing the conversation, but he made no effort to join it.

They reached Columbus Circle without running across an available cab. "So, park side?" Will asked. "That'll put us in position for an uptown cab. I don't know about you people, but I have no desire to walk thirty more blocks."

"Good idea," Olivia said. "We'll put you big, strong men between the park and us ladies, so you can protect us from things that lurk in the darkness."

"If some lurking thing leaps out at us, you're on your own," Will said. "I figure all I have to do is outrun the rest of you."

It was Eamon who walked between the group and the park wall as they headed up Central Park West. When they reached the old Tavern on the Green, Will called out, "There's a cab coming!" He stepped toward the street, waving his hand. Emily turned to see if the cab stopped, and while she was distracted, she missed her footing and would have fallen if Eamon hadn't caught her elbow.

Emily felt oddly dizzy—whether from the near fall, the events of the day catching up with her, or Eamon's touch, she wasn't certain. She was sure she was still walking, but it felt more like floating, and it seemed as though she was covering great distances with each step. She closed her eyes for a moment and gave her head a good shake. When she opened her eyes, everything was different.

For one thing, her friends were nowhere in sight. For another, she was deep in the park, not on the sidewalk next to a major street. Grass and trees surrounded her, as far as she could see. And she could see. It had been dark before, but now it was daylight. Not midday, but more like the time just before sunset, although the shadows didn't stretch the way they did at sunset. In spite of the waning light, the colors were intensely saturated. The grass was much greener, the sky was much bluer, and there were brightly colored flowers everywhere. It was as though she'd left sepia-toned Kansas to enter Technicolor Oz, and everything had burst into the most vivid hues she'd ever seen.

The one constant was the man with her, and even he had changed. She'd thought he was cute before, but now he was so beautiful he was beyond human. His pale skin had an opalescent shine, like he was lit from within, and the white-blond hair glowed a metallic silver.

This was all really, really strange, but she had a sneaking suspicion about what had happened. The details were different, but the incident was hauntingly familiar. Her pulse sped up like she was about to step onstage on opening night. "Oh my God," she breathed. "It was real!"

She'd been in a place like this before, long ago when she'd wandered off the path in the woods back home in Louisiana. At times over the past fourteen years she'd wondered if it had actually happened, if it had just been a dream or a delusion of her sister's that she'd heard about so often that she had a mental image of it as vivid as a memory. But it was real.

She'd been brought back into the realm of the fairies—not the cute winged sprites of greeting cards and Disney movies, but rather the Gentry, the fae, the Sidhe, whatever people called them in places where these creatures were feared or respected. According to her sister Sophie, they were beautiful, horrible, greedy, selfish, and utterly amoral. The last time, Sophie had brought her back to the real world and had impressed upon her the danger she'd narrowly escaped, but ever since then, Emily had felt incomplete, like she longed to return to a place where she'd once been truly happy.

Now she was back, and Sophie was nowhere nearby to drag her away this time. Could a place this beautiful really be that dangerous? Okay, so Eamon had pretty much kidnapped her instead of inviting her, but it wasn't as though he'd done it in a mean way. This time she knew the rules: never give direct thanks and don't eat or drink anything they offer. She might as well enjoy herself, and then if it worked like the time before, she could be back home before anyone knew she was missing.