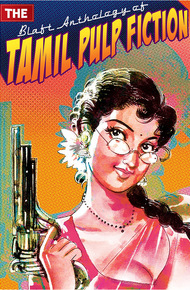 Pritham K. Chakravarthy is a theatre artist, storyteller, activist, freelance scholar, and translator based in Chennai. Her academic interests include media, performance art, gender, and nationality; she has been a research associate for UC Berkeley, the London School of Economics, and the University of Toronto. Her research projects have ranged from studies of Aravanis (the transgendered community of Tamil Nadu) to biohazardous waste disposal in India. Her other translation projects include Zero Degree by Charu Nivedita.

Rakesh Khanna was born in Berkeley, California. He studied music and mathematics at UC Santa Cruz and IIT Madras. He co-founded Blaft Publications in Chennai in 2006, and is the author of the forthcoming Ghosts, Monsters, and Demons of India.

Mad scientists! Desperate housewives! Murderous robots! Scandalous starlets! Sordid, drug-fueled love affairs! This anthology features seventeen stories by ten best-selling authors of Tamil crime, romance, science fiction, and detective stories, none of them ever before translated into English, along with reproductions of wacky cover art and question-and-answer sessions with some of the authors. Grab a masala vadai, sit back and enjoy!

I fell in love with this book at a Kinokuniya in Singapore shortly after it came out. Discover the hidden world of Tamil pulp fiction and you'll never look back! – Lavie Tidhar

Subha is the nom de plume of not one but two authors: Suresh and Balakrishnan. This extraordinary writing partnership began when the two friends were schoolmates and continues to the present day. Since 1983, they have co-authored around 550 short novels, 50 longer novels serialized in magazines, more than 400 short stories, and a number of screenplays and dialogues for Tamil cinema and television. Most of their stories feature the spunky young couple Narendran and Vaijayanthi of Eagle Eye Detective Agency, along with their co-worker John Sundar. The two authors now run their own publishing company, which in addition to their three monthly novels also brings out non-fiction titles and the occasional special "team-up" story in which Naren and Vaij collaborate on a case with Pattukkottai Prabakar's detective couple, Bharat and Susheela.

Suresh and Balakrishnan live with their families in adjacent apartments in Adyar, Chennai.

The automatic doors closed behind Narendran as he entered the airport lounge. With his hands in his pant pockets, he chose an empty seat next to a granite pillar, sat down, and crossed his legs. His eyes scanned the lounge, trying to figure out who the anonymous phone caller could have been.

Was it the man in the blue shirt, at the water cooler? Or the guy in the green shirt, browsing through a heavy book in the bookshop? What about the one in the gray safari suit, rubbing his lips after burning them on a tasteless airport espresso? Or the one with the traveler's bag, talking to the policeman?

"Naren! Very, very urgent. Can you meet me at the domestic terminal at the airport? I have arranged for someone to meet you there. I am unable to come and see you directly at the Eagle Eye office. Please, please, please!"

Narendran could easily have ignored the phone call. But since Vaijayanthi had taken her mother to the homeopathic doctor, he had no company at the office. There was no good reason not to make a trip to the airport. And so, here he was.

But after five minutes of waiting, Narendran was already losing patience. The television monitor was displaying a list of planes that were indefinitely delayed. The words "Check In" flashed in red, next to the number of a flight that would probably not take off for another several hours. Some bratty kid was pointing at the ceiling, screaming like an air raid siren for his mommy to get the chandelier down for him so he could play with it.

He felt something nudge his elbow. He turned. It was the arm of the person sitting next to him.

"Car number TN-O9-7611 is waiting for you outside. They've got your information," the man said, hardly moving his lips.

"I don't make a habit of jumping into the cars of people I don't need to know."

"Listen, I could tell you my name, but it wouldn't be of any use to you. I'm here at the airport on a different errand. I was asked to give you this information. That's all!"

Narendran got up, irritated.

In the car park, he found a green Fiat with the matching number plate. He opened the rear door and got in. Despite what he'd told the guy, this was the third case he'd been on where someone had arranged to meet him this way. So he sat and waited. After a moment, the driver showed up, climbed in, and started the car. Narendran tapped him on the shoulder.

"I don't have any answers for you," said the driver.

"I don't have any questions. I just want a match, pal," said Narendran, a cigarette between his lips. The driver handed him a matchbox with his left hand. The car sped away from the airport.

Dragging deep on the cigarette, Narendran looked at the driver in the rear-view mirror. A square face, thick moustache, brutish brow, small scar next to the left eye—and a rudraksh tied around his neck, just visible above his top shirt button.

"Look, I'll limit myself to really easy questions. Where are we headed?"

"To my employer's house."

"And do you know your employer's name?"

"You're going to see him soon. Can't you be patient till then?"

"Why don't I try to guess who your employer is?"

"If I can't figure out something that simple, what have I been doing working at Eagle Eye all this time?"

"Fine. Go ahead and guess."

"Your employer is Surya Shekar, the opposition leader."

"Well, you have a tattoo of the three doves, the party symbol, on your left wrist."

"Any party cadre member might have the same tattoo. He could be employed elsewhere, you know."

"Fair enough. But you also have a ring with the same design. I read in Dhinathanthi that Surya Shekar presented rings like that to twenty of his employees. Third page, second paragraph. Didn't you read it?"

The driver didn't answer that.

"No idea, sir. I was told to wait at the airport for you and to bring you to the guesthouse. That's all I know."

The car turned off at Nanganallur and took two left turns and three rights before heading through an empty field towards a bungalow. A watchman opened the gates.

There was a long cement driveway, with potted plants on either side. The car stopped and Narendran got out. The roof of the bungalow was tiled in the Kerala fashion, with red Mangalore tiles. A string of brass lamps hung above the doorstep. The heavy teak door opened onto a huge, square front hall. And there he sat, slumped on one of the sofas: Surya Shekar.