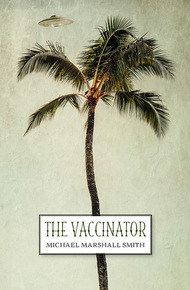 Michael Marshall Smith Is a novelist and screenwriter. Under this name he has published nearly a hundred short stories, and five novels — Only Forward, Spares, One of Us and The Servants — winning the Philip K. Dick, International Horror Guild, and August Derleth awards, along with the Prix Bob Morane in France. He is the only author to have won the British Fantasy Award for Best Short Fiction four times. In 2017 he published Hannah Green and her Unfeasibly Mundane Existence, and 2020 will see a Best Of Michael Marshall Smith collection from Subterranean Press.

Writing as Michael Marshall he has written seven internationally-bestselling thrillers including The Straw Men series, The Intruders — made into a BBCAmerica series starring John Simm and Mira Sorvino — and Killer Move. His most recent novel under this name is We Are Here. Now additionally writing as MICHAEL RUTGER, in 2018 he published the adventure thriller The Anomaly. A sequel, The Possession, was published in 2019.

He is currently co-writing and exec-producing development of The Straw Men for television. He is also Creative Consultant to The Blank Corporation, Neil Gaiman's production company in Los Angeles, and involved in the development and production of multiple shows including Neverwhere and American Gods.

He lives in Santa Cruz, California, with his wife, son, and two cats.

The Vaccinator by Michael Marshall Smith

Eddie Kruger has a past you don't want to know about. And you shouldn't ask, because then he'd have to kill you. And knowing Eddie, he'd do it efficiently and without a second thought. But right now he's living in Key West, at the very southern-most tip of Florida. Taking it easy. Avoiding trouble, for the most part, and doing a job he invented for himself.

Eddie's the vaccinator. If it looks like you're being set up to be kidnapped, Eddie can mediate on your behalf — for a fee — and help you avoid a great deal of unpleasantness. The only problem is sometimes the kidnappers don't understand the rules, because they're from out of town.

A very long way out of town.

I just love this book, which I bought back when it first came out in a collectors' limited edition. Yeah, I'm that guy. This is subtle and weird and wonderful and you'll love it. Ok? – Lavie Tidhar

If you walk east along Duval Street in Key West past the cafes, juice stands and T-shirt emporiums, eventually you'll come to the Havana Docks. It's a touristy kind of harbor, quite small, bordered on both sides by restaurant piers and not much used for seafaring beyond a couple of glass-bottom boats and a jet ski concession. Mainly it's there for looking at, and eating beside, and watching the sun set over. Also, stuff swims in it. Some days you'll see a manatee in the water around the pier supports, and there's generally Yellow Tail and Black Fin flicking around. You'd think fish would have the sense not to swim close to seafood restaurants, where people can look down at them and think 'Yeah, I'll take one of those, please, with some steamed beans and a cold glass of Chardonnay', but evidently not: I guess the real smart fish hauled themselves out of the water some time ago. At night little sharks swarm in the underwater lights, so many of them and moving so fast that it makes you wonder if the whole sea is that way, right out to the invisible horizon, a twisting mass of creatures who barely know we're here, and won't miss us when we're gone.

On this particular morning, a man called Eddie was sitting alone on the upper level of the East pier, feet up against the railing and a cup of iced tea cradled in his lap. He was watching one of the tan jet ski hire assholes going through his chops in the bay, showing the tourists how much noisy fun they could have for a mere fifty bucks an hour. The skier hadn't fallen off yet, but there was room for hope. Eddie was thinking that it would be best if it happened way out in the bay, some distance from shore, and that if anybody asked he'd say he hadn't seen anything.

It was early yet, barely ten o'clock, and the sun was only just getting into its stride, angled light glinting off the weathered wood of the pier, the swirls in the water, and the edges of Eddie's hangover. After a little while another, older, man climbed the steps up to the pier. He walked along the deck until he was level with where Eddie sat, and ground to a halt.

'Are you Eddie?' he asked, eventually.

'I am,' Eddie said, without turning. He took another sip of tea. It was warm already, the ice long gone. 'And you would be George?'

The other man nodded jerkily, realized he couldn't be seen, and verbally confirmed that he was. Then he carried on standing there.

Eddie levered himself into an upright position, turned and looked the guy over. Tall, late fifties, spreading around the stomach and thinning on top. He was wearing neatly pressed grey shorts, a blue short sleeve shirt with razor creases, and dinky white socks – and in general was not the most hip-looking person in the Keys that morning.

'Sit,' Eddie suggested. 'Standing there, you look like some kind of Illinois realtor on vacation.'

'Uh, I am,' George frowned, stepping back to perch on the edge of the nearest chair. 'That's... what I am.'

'I know. That was a joke, to set you at ease. Didn't work, evidently. You want a cigarette?'

'Good for you,' Eddie said, equably. 'You and everyone else these days. May you all live forever.'

George watched while the man lit his cigarette. Eddie was wearing jeans, cowboy boots, a loose jacket and an expensive-looking T-shirt that didn't proclaim him a member of the Conch Republic or have a picture of a very specific breed of dog on it or say that while he was only two years old, he had an 'attitude' – so it couldn't have been bought in Key West. He had short dark hair and a trim goatee, sharp green eyes, looked late thirties or thereabouts, was lean but broad in the shoulders and gave the impression that whatever he did, he likely did it fast and well.

'Okay,' Eddie said, eventually, around a mouthful of smoke. 'All I know is what Connie told me. You sell land up North, and might have an unusual kind of problem.'

'That guy's name was Connie? Isn't that a girl's name?'

'Usually, yes. In this case it's short for 'Conrad'. You want to take the matter up with him, then be my guest, but to be honest I wouldn't advise it.'

George looked down at his feet, and was quiet for a moment. His mouth opened after a while, but then closed again, tight enough to make a popping sound.

For the time being, that appeared to be it.

Eddie watched as some seabird – he'd never been able to figure the difference between the types, or why it would be worth knowing – dropped chaotically out of the sky and snatched something from out of the swell.

'Here's what you're thinking,' Eddie prompted. 'You got involved in a conversation last night with a barman you never met before. During which you let something slip. A matter you can't even talk to your wife about. And now here you are, sitting with another guy you've never met, and you don't think you can tell him about it either, even though you want to.'

'How did you know I was married?'

'Look in the mirror, George. I never seen a man look as married as you. Which is a good thing, incidentally.'

'Right. Approval's very important. Plus that's not exactly a cheap ring you've got on your finger.'

'You are. Because you don't like hiding stuff, or having to lie about it. Like the fact you told your wife you were going out to bring back pastries or something this morning as an excuse to come here alone. But untruth is becoming a habit, because you don't want to worry her, and that's making you do things like go out to bars when she's asleep in bed in your nice hotel room — and that's a dubious life choice, George, because sometimes bad things happen to lone guys in bars. There's a whole criminal ecosystem set up to prey on that kind of person, and then the cops get involved, and it's going to look like you got some whole secret history you wouldn't even want.'

George smiled with half his mouth and one eyebrow. For a moment he looked like a man who closed a lot of prestige sales and was a local legend for giving junior realtors merry hell when they stepped out of line. 'Thanks for the advice. Noted. So why don't you tell me what my problem is?'

He evidently needed to hear someone else say it. Eddie said it. 'You think you're going to be kidnapped.'

'What else would you call it?'

George suddenly looked very tired. Eddie dropped his cigarette to the floor, ground it out with his heel. 'Why don't you tell me what's going on,' he said. 'And then I'll tell you what I think, and if there's anything I can do about it.'

George started slowly, but gained speed and confidence. He was a man used to conveying information, and his story was short and concise. Eddie occasionally asked for clarification, but mainly just let him talk.

It took perhaps ten minutes, and then George stopped and spread his hands, embarrassed, like a man expecting to be ridiculed.

'Okay,' Eddie said. 'In time-honored fashion, I got good news, and I got bad news. The bad news is yeah, you are shaping up to be kidnapped.'

All the breath in George's body came out in a rush. He looked like he had sunstroke. 'So what's the good news, exactly?' he croaked.

'I might be able to do something about it,' Eddie said. 'How long are you aiming to stay in Key West?'

Eddie considered. 'Should be enough. Okay, so relax for a day or two. Act like nothing's happening. You staying at the Marquesa?'

'How the hell do you know that?'

'Just a guess. It's a nice place. I'd be staying there if I was you. You should make sure you're around late afternoon on Saturday. They have wine and cheese by the pool. The wines are quite good.'

George stared at him. 'I'll bear it in mind.'

'Also, go to Bug's Pantry on the way back to your hotel: they have nice stuff, and it's sufficiently different to the Marquesa's continental breakfast that it's not going to look weird that you went out for it. Corner of Curry Street. They sell flowers too, and newspapers. One more thing. You realize this is going to cost you money?'

George the businessman came back. 'How much? And what kind of guarantee do I get?'

Eddie watched George think about the phone calls, and the fax. About what had happened to his car. About his wife, and all the things he hadn't told her.