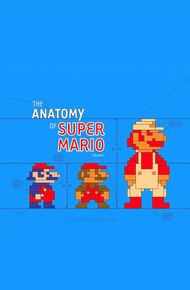 The Anatomy of Super Mario Vol. 1 by Jeremy Parish

This volume republishes material from The Anatomy of Games, a project in which classic video games are broken down to explore what works about them (and what doesn't). In short: It's a quest to discover what makes them classic. Super Mario Bros. is a master class of intuitive, approachable game design, and this book attempts to explore the design choices that set them a notch above its peers.

The Anatomy of Super Mario Vol. I explores not only Super Mario Bros., one of the most influential and iconic games of all time, but also the creations that led up to it. Beginning with Donkey Kong and working through Mario's subsequent releases (including generally unrelated titles like Wrecking Crew), this book delves into the works that created a legend.

You probably know Jeremy as one of the most respected retro-focused video game journalists in the world today. So it makes total sense that we'd get one of his 'Anatomy Of' books for his first StoryBundle inclusion - and start out with one of the best video games of all time, Super Mario. Analysis, background, details - oh my. – Simon Carless

Super Mario Bros.'s first level had a lot riding on its shoulders. It was every player's entry into this revolutionary new take on the concept of running and jumping. Again, it wasn't exactly the first sidescrolling action game in this vein, but its predecessors were obscure and limited in scope, and its creators (Miyamoto and Tezuka) couldn't assume players would have carried over knowledge from something like Smurf: Rescue From Gargamel's Castle or B.C.'s Quest for Tires for ColecoVision, Pitfall II from the dying days of the Atari family, or Pac-Land. This game necessarily stood on its own. And so 1-1 serves as a sort of training course, with every inch of the screen demonstrating either exacting discipline or perhaps simply remarkable design instincts.

Before you even start the game, Super Mario Bros. begins teaching you. The title screen simply features the first screen of the game with the logo superimposed, and this rolls smoothly into the attract mode in which a preprogrammed Mario begins what appears to be a normal playthrough of the game.

But even if you don't wait for the attract mode to kick in, the goals make themselves manifest immediately after you start. The game begins in an unusually low-stress fashion with Mario at the far left edge of the screen, facing right, with nothing else in sight. This calls back to Donkey Kong, which began with Mario at the bottom left of the girder course; placing his back to a proverbial wall coaxes the player to move forward.

But Super Mario takes a different tack than Donkey Kong did. The earlier game was an old-fashioned race to earn a high score within a finite amount of time, and so shortly after the first round begins Kong chucks a barrel directly at the oil drum behind Mario, causing a fireball to spill out and prod a particularly slow player forward in order to escape it. The first screen here, however, offers no dangers at all. A timer ticks down in the upper right corner, sure, but the clock for the first stage allows far more time than you could reasonably use up as you play through World 1-1. Instead, you're given a wide-open space in which to play around with Mario's capabilities. To get a feel for how he runs, jumps, stops. This concept would be expanded on more elaborately in Super Mario 64 with the courtyard outside the castle, but this one screen serves the same purpose while still encouraging you not to dawdle overlong… because, after all, this is an arcade-style action game, you know?

Once you move to the right far enough, you'll cause the screen to scroll forward. At this point, you may try to backtrack, at which point you'll discover the scrolling is "ratchet" style — it moves forward at the player's discretion, but it won't double back. This is a more expansive game than Mario Bros. by far, but it's still limited. You still have a singular focus: Get to the other end of the stage before time runs out. The one-way progression allows for some tough choices and nasty tricks along the way as well. But for now, it simply keeps you on track.

Once you begin scrolling the screen ahead, you find your first few details in the world: Some floating bricks, and a small mushroom-like enemy that walks slowly toward you. Mixed in with the bricks are a number of blocks featuring flashing question marks. A Mario Bros. player should be drawn, instinctively, to act here: Punch the Question Blocks, just like they did the POW Block in the previous game. But for the newcomer, the enemy — a Goomba — provides a clue, and incentive. It's timed to catch up to Mario right around the time the player should have guided Mario to a point right beneath the first Question Block. Like the fireball in Donkey Kong and Hadoukens in Street Fighter, the Goomba becomes a catalyst forcing the player to react. If you don't jump the Goomba, Mario will die.

Chances are that for the first-time player, Mario will die anyway. If you don't time the jump right, or if you smack Mario's head against the Question Block and kill the arc of his jump, the Goomba will walk right into him. But hey, lesson learned either way, right? Punch the Question Block and a coin pops out; smoosh the Goomba by jumping on top of it and a point tally floats up. In both cases, you're given an indication of a reward — though unlike the Goomba, the coin increments both your score and a separate coin counter, with a cash register chime to indicate some sort of greater value than mere points.

With the Goomba dead or avoided and the "hit me" essentiality of Question Blocks confirmed, the player moves on to the second portion of the block formation. The bricks do nothing but bounce when struck, but the leftmost Question Block — the first you'll hit — yields a new prize, a Mushroom. It slides to the right along the bricks, drops to the ground, rebounds off the pipe, and slides to the left along the ground.

You can snag the mushroom at any time before it slides off the screen, but you can also screw it up. If you get overly zealous and immediately hit the lower-right Question Block, there's a pretty good chance the upward motion of the reacting Question Block will glancingly strike the mushroom and send it bounding immediately to the left. This placement is surely not accidental; you can survive the loss of a mushroom here, so bouncing it away offers another of those Super Mario hard life lessons.

Whether or not you manage to snag the mushroom, this block formation also clues you into the fact that despite Super Mario's emphasis on horizontal movement through the stage it still retains some elements of Mario Bros.: To hit that upper block, you have to use the lower blocks as a platform. (Hence the genre's name.)

If you do grab the mushroom, Mario will shift into his super form. This makes him taller, but he doesn't run any faster. However, you may happen to discover that punching bricks now will cause them to shatter (and, according to the instruction manual, you are murdering an innocent citizen of the Mushroom Kingdom in doing so) rather than simply bouncing upward. You can also now take one hit before dying (suffering damage will cause Mario to revert to his smaller, weaker self), which you may have the occasion to learn firsthand as you move beyond the pipe into a sequence where multiple Goombas patrol between several pipes.

The first pipe is there to make you realize that jumping isn't simply defensive; it's essential for progress. The subsequent pipes just make things trickier to navigate and force you to pay attention to how the Goombas interact with the scenery and one another. Instead of simply passing through one another when they collide, Goombas treat one another as physically present. You can spot this with the two Goombas trapped between two pipes, walking side by side: The first will bump into the pipe, reverse course, immediately hit the Goomba next to it, reverse course again as the other Goomba changes direction, bump into the pipe one last time, and finally stomp along beside the other Goomba. It's a small detail that happens at the single-pixel scale, but it's an important one which demonstrates the way enemies adjust their behavior in response not only to the level design but also to one another. These comparatively complex behaviors play a huge part in later levels.