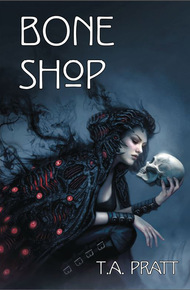 Tim Pratt was born in Goldsboro, NC, and grew up in various places in the American South. He relocated to Northern California in 2001. His fiction has won a Hugo Award, and he's been a finalist for Sturgeon, Stoker, World Fantasy, Mythopoeic, World Fantasy, Scribe, and Nebula Awards, among others.

His other books include three short story collections; a volume of poems; contemporary fantasy novels The Strange Adventures of Rangergirl and Briarpatch; gonzo historical The Constantine Affliction under the name T. Aaron Payton; fantasy roleplaying game tie-ins; and, as T.A. Pratt, eight books (and counting) about sorcerer Marla Mason. He occasionally edits anthologies, including the Rags and Bones anthology co-edited with Melissa Marr. He works as a senior editor for Locus magazine, and lives in Berkeley, CA, with his wife Heather and their son River. Find him online at timpratt.org.

Bone Shop explores the origins of ass-kicking sorcerer Marla Mason. Long before she became the Witch Queen of Felport, or the Bride of Death, Marla was a teenage runaway with no inkling of the dark magic that underpins the world. Bone Shop chronicles her rough beginnings, her apprenticeship, her years as a mercenary magician, and her eventual rise to power — navigating dangers including supernatural serial killers, cursed artifacts, and doomed young love.

I read my first Marla Mason novel way back in 2007 and was immediately drawn in by this smart and slightly wicked witch who guards the city of Freeport. I can’t think of a better way to be introduced to this character than through her origin story, Bone Shop. – Joseph Nassise

Praise for the Marla Mason Series:

Marla Mason spent the afternoon of her sixteenth birthday with a pyromaniac named Jenny Click. They sat shoulder-to-shoulder against the support pillar of an overpass, trying to stay out of the late spring rain, and discussed their options.

"The thing is, maybe I should follow my passion," Jenny said. She wore a transparent raincoat over an increasingly ratty sweater and a rapidly-disintegrating pair of jeans.

"Which passion?" Marla said. "Sex, drugs, or setting fires?" They hadn't known one another very long, but spending time together on the street helped you learn a lot about the essentials of a person.

"Well, any of them," Jenny said, scratching her long nose absently. She had thin blonde hair, big blue eyes, lots of little burn scars on her hands, and a general air of jittery craziness that made Marla feel calm and grounded by comparison. "But being a hooker means getting a pimp, or getting beat up, and even with a pimp you get beat up half the time anyway, I hear. Still, it's an option."

Marla made a noncommittal grunting sound. She'd run away from her home back in Indiana for a lot of reasons, but one of them was the way her mother's drunken boyfriends — or one-night-stand bar pickups — had leered and grabbed and groped at her. She wasn't going to submit to such things, and worse, now that she was on her own. Which did limit her options, admittedly.

"Or drugs, there aren't a lot of girl dealers, but maybe that's, like, a market I could exploit?" Jenny fished a cigarette from a cavernous pocket and lit it with her nicest possession, a Zippo she'd stolen from her dad, inscribed with the initials "JWC" — her dad's initials, and close enough, she said, to hers. She spun up the fire and stared at the flame for a long moment, eyes intense with concentration, until Marla snapped her fingers.

Jenny blinked, lit her cigarette, inhaled, snapped shut the lighter, and nodded. "Right. Sorry. But I mean maybe girls would be more comfortable buying whatever from another girl?"

"I don't know if any of the gangs would, uh, hire you. And even if you knew a dealer you could buy from, you'd need money to get started." Privately, Marla figured Jenny would consume any drugs she acquired before she could sell them — as far as Marla knew Jenny would try anything — and that would just end up getting her killed, or turned out, or something otherwise bad.

"Okay, so that leaves fire. My dad always said 'find what you love and do it for life,' but he sold fucking insurance, so who was he fooling? Maybe I could get a job as an arsonist. You know, burn places down for insurance money? I could join the... mob or whatever. I mean, I set fires anyway. Might as well get paid for it."

Marla liked hanging out with Jenny because she had a reputation as an utter lunatic — she'd once torched an unattended mail truck, the story went, because she wanted a fire to keep her warm — and people tended to give her, and anyone she was with, a wide berth. Marla could fight a little, her brother had taught her some dirty tricks, but it was smarter and easier to avoid conflict altogether, so that was the advantage of hanging out with Jenny.

The disadvantage was having to listen to the ridiculous crap that came out of her mouth.

"The problem, as I see it," Marla said carefully, "is that, if you set a fire for the insurance money, you'd probably want to stand there and watch it burn, maybe even until the cops got there."

Jenny waved her cigarette dismissively, and Marla leaned back to avoid being scorched. "I can work around it. Fires always attract a crowd. I can just... melt into the crowd. Nah, it'll work. It's good. Having a plan is good."

"Not sure how you get into a business like that," Marla said.

"There's a bar, on the other side of the river near the east bridge, I hear there's a guy there. Like a crime boss guy. Heard my dealer talking to his dealer about it, he's the guy they buy from, supposed to be a big deal. Maybe I'll go down there and, sort of, apply for a job?"

"Just go up to him and say, 'Hi, I like to start fires, you have any openings?'" Marla shook her head. "Best case, you get laughed at. Worst case, they call the cops."

Jenny tossed her cigarette aside, and was quiet for a long moment. "Your problem, Marla," she said at last, "is you just find excuses to tear stuff down instead of actually doing anything." Jenny rose and walked off into the rain.

"Is that my problem," Marla said, to the empty air. "I've been wondering."

Maybe it was a problem. Maybe she should do something about it.