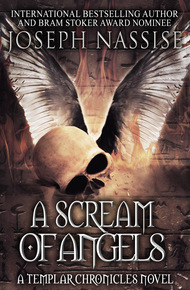 A Scream of Angels (Templar Chronicles: Book 2) by Joseph Nassise

When a Jesuit priest wanders out of the New Mexico desert, telling wild stories about a secret research installation and bloodthirsty demons hunting through its halls, the Echo Team is called in to deal with the situation. Their orders - investigate the facility, determine exactly what happened there, and deal with any infernal presence that might exist.

But the being they encounter beneath the desert sands has found a way to break the bonds of Hell itself and doesn't plan on going back easily. This time, their foe might prove to be too much for even Cade and the men of Echo Team.

Removing the patch from in front of his right eye, Cade triggered his Sight.

Light blazed out at him from multiple directions, light so bright that he was forced to hold his hand up in front of his eye to protect it from the glare. Mystical words, glyphs, and sigils were written on the face of the glass in every direction, covering almost its entire available surface, each and every one of them ablaze with the light of their inherent power. While Cade recognized many of them from his years of research involving the Adversary, others were entirely unfamiliar. Yet their purpose was clear.

The entire room had been warded.

Designed to guard a specific location or object, wards were one of the mainstays of modern magick. They came in two types; minor and major. Minor wards were just what the name inferred; minor magicks that could be used to protect a small object such as a book or a small storage chest. These could be performed by a single individual with limited preparation, often on the fly. Major wards were another story entirely, requiring several days of preparation and a sorcerer or mystic of no little skill with several acolytes to assist him or her. They were not undertaken lightly and the slightest mistake could have disastrous consequences. Major wards that failed outright often ended in the deaths of all involved in the casting.

Not only could wards be used to keep people away from a particular location, they could also be used to keep someone or something confined. Common folklore held that a demon summoned inside a pentagram could not cross its lines and the summoner was therefore safe to request the demon perform a certain act in exchange for releasing it. This was, in part, based on the fact that the pentagram, when inscribed in the proper sequence and with the proper materials, was actually a very ancient form of a major warding. But what had been fashioned here made a pentagram look like child's play.

Yet it still hadn't been enough.

A chill ran up Cade's spine and he turned back to face the damaged wall. Just as he'd expected, its surface was dark; the glyphs and sigils inscribed there were drained of their power, allowing whatever it was that had been imprisoned in the room to escape.

Not even major wards had been able to contain it.