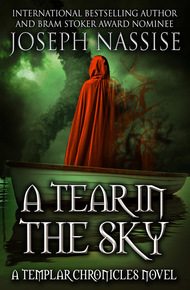 A Tear in the Sky (Templar Chronicles: Book 3) by Joseph Nassise

When Knight Commander Cade Williams discovers that his wife, Gabrielle, is not truly dead, but held in some kind of arcane stasis between the lands of the living and the lands of the dead, he vows that nothing will stop him from freeing her soul from the prison surrounding her.

But his vow is tested right from the start when an old friend calls on him to help protect the city of Boston from the ancient scourge that threatens to destroy it, leaving Cade with a heart-breaking choice: Do his duty and save the innocent lives he has sworn to protect or forsake them all in order to rescue the one for whom he would brave the walls of hell itself?

The package sat opposite him, just on the other side of the gate, right in the center of the drive where it couldn't be missed. Looking down at it, Cade could see the big black letters covering the white address label, the handwriting little better than a scrawl but still legible nonetheless.

He glanced over at Riley, who said, "The guard on duty is named Samuels. Claims he was at his post in the guardhouse the entire time. Swears no one could have come down that road without him knowing about it, never mind leave a package right under his nose."

"Except that someone did," Cade said pointedly, looking down at the parcel. It wasn't much bigger than a hardcover book, maybe eight by twelve or so, and was wrapped in a plain brown paper wrapper like hundreds of other parcels a person sees over the years.

But this one was addressed to him personally.

And it had been delivered here, to a place that should have been viewed as a private residence completely unconnected to Cade.

Cade stared at it uneasily. Very few people outside of the Order knew how to find him. And of those that did, none of them should know the location of the commandery itself.

Yet there it was.

If it had been a legitimate delivery, it would have come through official channels, and not been left abandoned at the front gate like an unwanted child. If the sender had wanted privacy, whether because of who they were or what the package contained, this was not the way to go about getting it. In fact, its method of delivery ensured that the contents of the package would be scanned, probed, and prodded at by a whole host of people before it ever got to him. Anything overtly threatening would be discovered; Cade had no doubt about that.

Recognizing that his discomfort wasn't going to go away until he knew what was inside the damned thing, Cade decided to look at the situation another way. He moved a few steps closer to the gate and lifted his eye patch.

His Sight didn't reveal anything unusual to him, however. As far as he could tell, the package was just that. A package. Or at least it didn't contain anything so overtly arcane that it's presence was visible despite the wrapping around it.

Putting his eye patch back in place, Cade returned to Riley's side. As he did so he glanced over at the guard, who was nervously talking with another officer, and snorted in disgust.

"Does he think we're idiots?" he asked Riley. "That we'd actually believe that cock and bull story?"

Riley kept silent, no doubt recognizing that Cade was just blowing off steam.

"Roger that." Riley pulled a radio out of his pocket and began working on the task.

The explosives team showed up a few moments later and Cade moved back a respectful distance, Riley at his side, to watch them get to work.

The gates were carefully opened, giving the team access to the package but without disturbing it in any way. A pair of dogs was then brought up, one to check for explosive residue, the other for drugs. Neither of them alerted, so the team leader ordered a pair of technicians to approach the package and give it a closer look.

The men were dressed in standard bomb suits that were made from an inner layer of ballistic cloth and an outer layer of fire retardant fabric and were composed of a sleeved coat and trousers, a chest plate and groin protector, and a helmet with face shield. Protective spats were also worn over the feet. The suits made them bulky and slow, but for what they were doing that was just fine. Bomb technicians who were in a hurry usually didn't live very long.

They laid a large piece of ballistic cloth, a bomb blanket, out on the ground next to the package. Checking first for an anti-lift device and not finding one, the tech used a pair of large metal tongs to gently lift the package and place it in the center of the blanket. Moving carefully, the two men then wrapped the package with the rest of the blanket. The material was designed to help contain the blast if something went wrong. That in turn went inside a heavily shielded transport crate and to Cade it seemed like everyone present breathed a sigh of relief as the door of the crate was closed.

He knew the team would take the package inside where they would first x-ray it from every possible angle before running it through a barrage of additional tests including a full chemical and biological weapons scan and then, and only then, would they attempt to open it to see what it contained.

As they watched the team move off, the crate carried carefully between them, Riley finally gave voice to what they both were thinking. "How did they know where to find you?"

Cade couldn't answer and that made him nervous, far more so than he cared to admit.