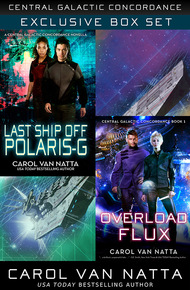 Carol Van Natta is a USA TODAY bestselling and award-winning science fiction and fantasy author. Series include the Central Galactic Concordance space opera series that starts with Last Ship Off Polaris-G, Overload Flux, and Minder Rising, and the Ice Age Shifters® paranormal romance series that starts with Shifter Mate Magic and Shift of Destiny. Her muse writes in series, even when Carol thinks she's writing a standalone story. She loves to sing and is very fond of tea. She shares her Fort Collins, CO home with a resident mad scientist and just the right number of equally mad cats. If she ever gets to explore the stars, she's taking them with her.

When 4,000 colonists are stranded on a dying planet, two ex-lovers and an ancient freighter are their only hope for survival.

Independent trader Gavril Danilovich is trapped on Polaris-G, a frontier planet in the midst of an ecological disaster. The galactic military is blockading the system to contain the mysteriously virulent blight. The planetary government impounded his ship. Even worse, his uncontrolled mental talent for empathy means the colonists' fear and anger are threatening his sanity.

When government supply depot manager Anitra Helden finds a mothballed interstellar freighter in an abandoned repair dock, she hopes to use it to carry supplies the colonists will need when they finally get to leave. Given the planet-wide turmoil, the only person she trusts to repair the ship is Gavril, her ex-lover.

Everything changes when they learn 4,000 colonists are stranded. Can Gavril and Anitra pull off the rescue, outmaneuver the military fleet, and win their second chance at love?

When the cure for a deadly disease is stolen, two misfits are all that stands between greed and intergalactic tragedy.

Luka Foxe can't let anyone know about his secret mental abilities, or that they're destroying him. The brilliant forensic investigator now only takes theft cases. But when he has to hunt down a hijacked vaccine, the tragic first clue is his best friend's brutal murder.

Nightshift guard Mairwen Morganthur, the product of illegal genetic alteration, is a lethal weapon with no social graces. But when she's tasked to protect a detective with frightening intuition, she finds herself falling for him even though he could expose her.

Racing to recover the cure for a galaxy-wide pandemic, Luka is surprised by his developing feelings for the capable-but-mysterious guard. And Mairwen may have to risk everything by revealing her identity, with deadly mercenaries hot on their tail.

Can the unlikely pair survive an interplanetary conspiracy long enough to save lives and find love?

Carol Van Natta is an accomplished USA Today bestselling author whose stories will keep you captivated from start to finish. The author and I are new acquaintances, and StoryBundle is delighted to include her in the Our Heroes collection. Genetic engineering and space exploration collide in the Central Galactic Concordance boxset, which contains the first two books in the series—Last Ship Off Polaris-G and Overload Flux. – Melissa Snark

Anitra sealed the collar of her green half-cloak against the chill of the disused hangar and walked briskly back to the stairway up to the banks of computers and large-format displays where Gavril worked. She wouldn't even have recognized them as comps, much less that they controlled the repair dock's cameras, scanners, and probes below, if Gavril hadn't told her. She'd found a plausible excuse to get the dock's power turned on and neighborhood batteries recharged without mentioning the existence of the dormant freighter in the underground repair silo. Good thing she'd remembered Gavril trained as a ship engineer and worked in a commercial shipyard for twenty years before taking up the life of an independent trader. And good thing he also liked tinkering with old ships, because the Deset Diamantov was at least ninety years old.

She stood to the side, out of his way, surreptitiously admiring the view. His imposing nose and generous mouth looked European, but the shape of his eyes and cheekbones, and his wiry strength, spoke of Asian heritage. His currently long black-, blue-, and gold-beaded braids hid the pilot's skulljack behind his bejeweled ear. It made an intriguingly handsome combination, and was one of the qualities that had first attracted her to him. He was sexy as hell. His grumpy, sarcastic surface hid a generous nature and a lively sense of the absurd that made her laugh.

She didn't need her empath talent to tell that he was enjoying himself now, but she dropped her shield and let herself be soothed by the uncontained flavors of it anyway. Not exactly ethical, but she needed it. They'd be back in the sulking, raging city soon enough.

He slid his hands into his jacket pockets and turned to her. "That's the final system check." The corner of his mouth twitched with humor. "Tell me again how the planetary government lost a freighter the size of a gravball stadium."

She laughed at the acerbity in his tone. "I don't think they ever knew they had it. After our first visit, I did some digging. When the settlement company's illegal embargo depressed off-planet trade last year, the shipyard owners emptied their financial accounts and left in a hurry. Their major investor went bankrupt a month later. Pol-G eventually confiscated the property for taxes owed and sent the city an audit request, but it never happened, probably because it was on a list of hundreds. Aetheres lost half its population and businesses in the six months before the blockade. Oh, sorry, the 'pandemic quarantine for the safety of the Concordance.'" She made air quotes with her fingers. "I only found this place because it's tagged in my office's records as a suspended transportation warehouse—probably a translation error—and I was hoping it had a missing government cache of pre-blight mealpacks. When I read the actual business name on the hangar doors, I thought of you." If she was honest, she'd thought of him a lot since running into him in the pub, and remembered how they'd synced so well. She'd put off contacting him again, because the timing tanked and her job kept her insanely busy, but this was too good an opportunity to pass up.

Her growly stomach wanted the lunch she'd left in the flitter they'd parked just inside the gigantic front doors, but she wanted to hear Gavril's evaluation more.

"Who owned the ship?" His Standard English held the flavor of a Slavic accent with certain words.

She shook her head. "No record. Best guess, the shipyard was holding it hostage until the owner paid the repair bill." She tilted her head toward the diagnostic displays. "Maybe the shipcomps know?"

"No, they're flatlined." A three-tone chime sounded from the console, loud enough to echo against the high walls. He turned and manipulated the holo interface. Data streamed on one of the displays, then went blank. He shut down the console and made a face as he pressed a control that retracted the displays. "It's good news, bad news."

"Bad first." Better to know what she was up against, rather than living on hope.

"Absolute zero fuel, either system or flux. Two out of four coils in the system drive are fried, along with the gravity compensators, atmosphere wing controls, and thrusters. All the comps are flatlined—engine, nav, enviro, security, comms, everything. No working escape pods. No weapons, not even amped-up debris lasers. The incalloy is too thin where the ship took heavy energy weapon damage. Someone sealed off the largest loading airlock rather than replace it." He shook his head in disgust. "The cargo holds are a catastrophe waiting to happen—a jumble of mismatched shipping crates bolted onto a random spider web of cross-struts."

"No wonder they abandoned it." She sighed. "What's the good news?"

"It's a good design, with good bones. The interstellar drive is only ten years old and sized correctly for the ship and a full cargo. That would have been a deal-killer. Everything else is fixable, right here"—he circled a finger to indicate the hangar and everything below it—"if you can line up shipbuilders, engineers, data techs, materials, replacement parts, incalloy, and someone to redesign and refit the cargo holds. And an ocean-sized tanker or two of fuel."

She had a lot to think about, and as usual, too little time.