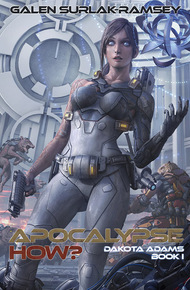 When Galen's not obsessing over his latest text, he's likely throwing himself out of an airplane, teaching others how to throw themselves out of an airplane, playing something online, taking pictures of the heavens with his telescope, or wrangling his four children somewhere in Southwest Florida.

He also manages to pay the bills as a chaplain for a local hospice.

Drop by his website galensurlak.com to check out what else he has and be sure to sign up for his newsletter for exclusive content, giveaways, and goodies.

Apocalypse How? by Galen Surlak-Ramsey

I never thought I'd have a bounty on my head the size of the Milky Way.

Of course, I never thought I'd be able to bend time, either.

But hey, life is full of surprises.

Don't get me wrong, feeling like a goddess has its perks, but those perks come with a hefty price. My brain is tapioca. I'm stranded in the middle of dead space. Ratters are using me for target practice, and a giant, cybernetic monster named Oscar is trying to make me his chew toy.

All this because I played superhero (or thief, according to some) and snatched a doomsday device from an intergalactic mobster.

So if I don't make it out of here alive, remember this:

Above all else, I want a Viking funeral.

When he's not drafting Sci-Fi novels, Galen Surlak-Ramsey spends his days jumping out of airplanes (and teaching others to skydive). He is also a father of four and a chaplain for a Florida hospice. A busy man who somehow finds the time to produce Sci-Fi thrillers that will keep you on the edge of your seat. – Melissa Snark

I don't know how everyone didn't die of boredom a thousand years ago.

I mean, back in the 5th century PHS (Pre HyperSpace), you only had a handful of channels to watch, and the farthest anyone had gone was the moon. To top it off, it took them three days to get there. I'd rather let a Ferrean dust worm gnaw my arm off than spend that long twiddling my thumbs in a cramped cockpit with nothing to do.

And while I'm ranting about ancient history, I can't even imagine being stuck on a tiny blue planet that at least one guide listed as being mostly harmless. I need to sail the Horsehead Nebula! I need to speed dive the event horizon of KT-124! I need to go spelunking at the Venetian poles!

I know. I know. Billions of people have already done all that, but my true passion is finding lost alien technology and prehistoric civilizations that even time doesn't remember. So, after a lot of research, a few hot tips, and calling in three solid you-owe-me's, I got a hold of a good lead on what would hopefully be an ancient crash site on a backwater planet.

How much would a find be worth? Anywhere from junk to untold riches, obviously, but I had hopes that the salvage here would get me enough to buy a brand-new Hermes '64 Intruder. With its seven-point-eight cubic meter warp core and six-barreled displacement drive, I'd lap the galaxy faster than gossip laps a locker room. When I can do that, I'll put all other treasure hunters to shame.

And if I got mega-trillions-jackpot lucky, I could find something the Progenitors left behind. For those of you who slept through history class, they're the guys fabled to have been the most advanced species ever to exist. They created worlds on a whim and popped in and out of any dimension they pleased.

What I wouldn't give to be the first to prove their existence. Becoming the most famous xenoarchaeologist in the Milky Way would be a nice touch, too, and I'm pretty sure I'd get my PhD on the spot, even if I haven't technically finished my undergrad. Then I'd be able to introduce myself as Doctor Adams. Doctor Dakota Adams.

Yeah, I like the sound of that. Sounds a ton better than Miss Adams, doesn't it? I like it so much, in fact, if I ever get home with my skull intact, I'm going to order a nameplate the first chance I get.