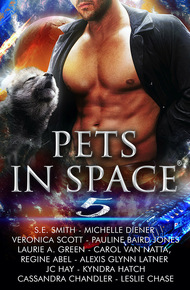 It's time for an escape! Pets in Space® 5 is back for the fifth amazing year! Escape to new worlds with twelve of today's top Science Fiction Romance authors. They have written 12 original, never-before-released stories filled with action, adventure, suspense, humor, and romance that will take you out of this world. The giving doesn't stop there. For the fifth year, Pets in Space® will be donated a portion of the first month proceeds to Hero-Dogs.org, a non-profit charity that supports our veterans and First Responders and are hoping to donate more! If you are ready to forget the world around you and make a difference while you are having fun, grab your copy before it's gone!

Pets in Space 5 is an award-winning anthology features 12 original stories from well-respected authors. Every year Pets in Space donates a portion of its proceeds to Hero-Dogs.org, a non-profit charity that supports our veterans and first responders. StoryBundle hopes to raise even more money for this amazing charity.

Pets in Space 5 features an exciting short story Star Cruise: Return Voyage that ties-in with Star Cruise: Outbreak by Veronica Scott, which is also part of the Our Heroes StoryBundle. – Melissa Snark

Trevor Hanson paused at the threshold of his cabin on board the Nebula Zephyr as he did every time he was ready to leave, taking a moment to center himself mentally, remind himself he was years away from the events that had scarred him forever and prepare to be an efficient security officer on this luxury cruise ship. He owed the captain and his chief loyalty in return for them giving him a chance at a normal life. The CLC Line was supportive of veterans but his case was a special one. He wasn't your ordinary veteran of the interstellar wars and his case of post-traumatic stress disorder wasn't garden variety either.

Take a deep breath. There is no threat out there.

"Ready?" the ship asked him. Maeve the Artificial Intelligence, who ran the Nebula Zephyr, knew his secrets and protected him.

Nodding, he practiced a smile. "Open the door."

The door slid open soundlessly and Trevor walked into the corridor, acknowledging greetings from fellow crew members as he headed for the gravlift. There were no passengers allowed on this level but he'd be among them soon enough. His regular patrol route was Level A, being visible in the vicinity of the expensive gift shops, the swanky restaurants and the casino, so the guests would feel safe and well protected.

Which they were. Jake Dilon, the head of ship's security and his boss was a badass former Special Forces operator and he ran a well-disciplined team.

As Trevor arrived at Level A, ready to start his patrol, Maeve sent him a message over the private communication link. "A change in orders. You're to report to the captain on the bridge. Gayla will take over your patrol this morning."

"Do we know what's going on?" He headed for the gravlift giving access to the bridge and the captain's wardroom.

"Not my place to tell you but nothing bad." Maeve closed the link with a click.

Trevor entered his code on the keypad and the door to the gravlift opened, since he was authorized to access the bridge today. Riding up the silvery stream took only a few seconds and he stepped onto the bridge. The normal contingent of crew and officers were at their stations. Third Officer Steve Aureli had the con, which made sense as the ship was getting ready to go into orbit around their destination.

A yeoman was waiting for him. "Captain Fleming wants to see you in the wardroom. This way."

Trevor followed the other through the short corridor and was left outside the conference room to key the arrival button and receive permission to enter. Stepping across the threshold, he saluted. "Lt. Trevor Hanson reporting as ordered, sir."

The captain was seated at the head of the table, drinking real Terran coffee from the battered mug which bore the crest of his last battleship command. "At ease, Hanson. Get yourself some coffee and come sit down. I have a special assignment for you on this leg of the cruise."

He wasn't thirsty but no one refused the captain's invitation and especially not when the beverage on offer was the rare and costly real coffee. Trevor picked up a Nebula Zephyr mug, filled it, spurned the sugar and cinna spice, preferring to drink it black, and joined the captain. His curiosity coiled in his gut. Highly unusual for Fleming himself to skip protocol and give orders directly to any crew member. He was a firm believer in the chain of command and military protocol, even now, commanding a cruise ship.

The captain was staring at the big vid screens which showed the planetary system the ship was fast approaching, a series of reddish tinted jewels scattered across the black velvet of the galaxy, circling the yellow sun in the eternal rhythm decreed by astrophysics and the laws of the universe.

"What do you know about the wreck of the Nebula Dream?" Fleming asked, still watching the planets.

Pop quiz time I guess. "Worst passenger ship disaster in the history of the Sectors, thousands of lives lost, heroics by a Special Forces officer who happened to be aboard and saved hundreds. We had a module on it when I was in training, sir, mostly regarding the decisions made by the soldier. One of those 'what would you do in his place' type classes."

"Nick Jameson," Fleming said, supplying the name of the officer under discussion. "His decisions in what regard?"

"At each point, I guess. To stay on the ship, to use what is politely called classified means to contact rescue ships, and to fight the enemy when they boarded." Remembering more details as he talked, Trevor added, "Guy was gutsy, smart and lucky. Oh and the cruise liner was way off course, in enemy territory. May I ask why the interest, sir?"

"We're a sister ship, did you know that? Not the exact design but close, and of course we have different engines. No one uses the Yeatter unstable technology nowadays, not if the shipbuilders are sane."