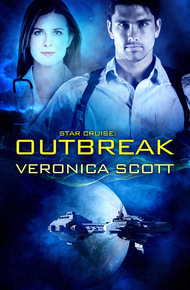 Veronica Scott grew up in a house with a library as its heart. Dad loved science fiction, Mom loved ancient history and Veronica thought there needed to be more romance in everything. When she ran out of books to read, she started writing her own stories.

Seven time winner of the SFR Galaxy Award, as well as a National Excellence in Romance Fiction Award, Veronica is also the proud recipient of a NASA Exceptional Service Medal relating to her former day job, not her romances!

She read the part of Star Trek Crew Member in the official audiobook production of Harlan Ellison's "The City On the Edge of Forever."

She saved countless soldiers in the wars … but does she have the weapons to fight an outbreak?

Dr. Emily Shane, veteran of the interstellar Sector Wars, is known as "The Angel of Fantalar" for her bravery under fire as a medic. However, the doctor has her own war wounds–severe PTSD and guilt over those she failed to save.

Persuaded to fill a seemingly frivolous berth as ship's doctor on the huge and luxurious interstellar cruise liner Nebula Zephyr, she finds the job brings unexpected perks–a luxe beach deck with water imported from Tahumaroa II, and Security Officer Jake Dilon, a fellow veteran who heats her up like a tropical sun.

However, Emily soon learns she and Jake didn't leave all peril behind in the war. A mysterious illness aboard the Zephyr begins to claim victim after victim…and they must race against time and space to find the cause and a cure. Trapped on a ship no spaceport will allow to dock, their efforts are complicated by a temperamental princess and a terrorist–one who won't hesitate to take down any being in the way of his target. If anyone's left when the disease is through with them…

Veronica Scott is a USA Today bestselling author who holds a NASA Medal of Excellence as well as being a 7-time SFR Galaxy Award Honoree. Additionally, she was the acquisitions editor for Pets in Space 5. I was fortunate enough to meet Veronica through our mutual friend, Pauline Baird Jones. StoryBundle is pleased to include her space opera novel, Star Cruise: Outbreak, which ties into the Pets in Space 5 short story Star Cruise: Return Voyage. – Melissa Snark

"What's the matter?" Automatically, she rushed to retrieve her medical kit.

"We have a dead passenger," Maeve said, speaking louder as the door chimed.

So much for minor ailments. Keying the portal to open, Emily came face-to-face with Red, in uniform, a discreet security badge on his jacket.

"Sorry to meet again so soon under these circumstances," he said. "Jake sent me—"

"Yes, the ship told me you were coming." She let the portal close behind her and set off at a rapid pace toward the nearest gravlift. The corridor was deserted at this time of "night."

Glancing around to make sure there wasn't anyone close, Red nodded. "Passenger Edvar Groskin, in his cabin." He allowed her to precede him into the gravlift. "Groskin hadn't been seen for a day or two, missed an appointment for dinner with some prospective clients who reported not being able to reach him. Had the do-not-disturb signal on, but the chief stewardess was concerned, so she asked Maeve to check." Red leaned closer. "Passenger privacy is of utmost concern on the CLC Line, but there's a point where we have to intrude."

"You must be positive he's deceased, not to have called the ship's emergency response team."

"No doubt I've seen worse." Emily clenched one fist where he couldn't see, nails biting into her palm in hopes the tiny spurt of pain would forestall a flashback to some of the horrific scenes she had endured. Now wasn't the time for an incident, and echoes of the earlier nightmare lingered. "Suicide?"

"Doubtful." Red didn't appear to notice her preoccupation. "Groskin was a hanger-on with the wealthy crowd. He used to be a minor celebrity, some kind of athlete. Always had a dozen schemes and scams going on. Upbeat guy, from what I've been told. He was going to the big surfing competition on Sector Hub."

They'd reached the late passenger's cabin, where the portal was half open.

Jake was waiting in the foyer. "Sorry to wake you, Doc. Guy's on the floor in the bedroom. We're not sure what he had."

Emily stepped into the room. The bed was in disarray, and the passenger had obviously been quite ill in his last hours. Clothed in synthsilk pajamas, the body was already in the first stage of rigor mortis. Activating the sterile barrier on her hands, she ran her scanner over the man, noting the readings, especially in the heart and lungs. Sitting on her heels, she said, "Heart attack, probably brought on by pneumonia, is my initial diagnosis." She looked at Jake. "Without an autopsy, we won't know for sure, and I should warn you I'm not a pathologist."

"We're not set up to do autopsies anyway," Jake said. "The unpleasant job'll be for the authorities at the next port of call. I need you to sign the provisional death certificate and state there was no crime involved as far as we know at this time. Different regulations kick in if there's any evidence of foul play."

Emily raised her eyebrows and checked the body again. "Nothing to indicate any kind of crime." She leaned closer. "Odd." Pointing at the corpse's upper chest, revealed by the gaping shirt, she said, "See those purple splotches?"

"Like spider bites." Jake shifted position to get a better view. "Something to worry about?"

"I don't think so, just unusual. It's not unheard of for a rash to accompany high fever." Emily eyed the tiny purplish dots and made a note in the file detailing the way the discoloration covered the man's chest and neck. "Definitely not bites, no puncture wounds." She added a sentence or two about the fact the deceased had apparently suffered a copious nosebleed toward the end as well.

"Could this be something contagious?" Red asked.

"Depends what form of pneumonia he had, but not normally, no. A healthy person can usually fight off the pneumonia-causing microbes. Maybe he had an underlying condition. Hard to say, never having treated him." She considered her next course of action. "I can take a few samples, run an analysis. Is anyone else on board sick?"