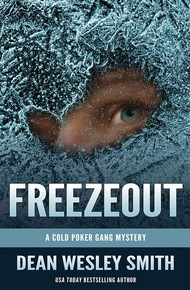 Sandy Hunter kissed her husband goodbye one normal morning on her way to work. She never made it. Last seen walking alone into a Las Vegas hotel room, she never came out and no sign of her remained in that room.

Her missing person's case went cold for fourteen years until retired Las Vegas detectives Debra Pickett and Sarge Carson, members of the Cold Poker Gang, decided to investigate how a woman could vanish from a locked hotel room without a trace.

SANDY HUNTER KISSED her husband Rich goodbye in the modern kitchen of their apartment four blocks from Las Vegas University campus. Everything seemed perfectly normal. The morning sun through the kitchen window promised a beautiful spring day and that evening they had date night planned, with a wonderful dinner at their favorite sushi place.

Sandy stood five-two on a good day and looked much taller because she always wore heels, slimming black slacks, and had her medium-length brown hair pulled up on the top of her head. At twenty-four, she was just finishing her second master's degree in business. She worked part time at a securities firm and to everyone around her she appeared to be happy.

She and Rich had many plans for the future.

Rich still had a year to go on his second master's in history and was working at the university. He hoped to eventually become a professor there after a number of years.

He was short at five-five and Sandy often looked taller, something he didn't mind in the slightest. Unlike her, he didn't much care about his height one way or another.

Sandy told Rich she would be home to change clothes before dinner, then went down the three flights of stairs and got into their new Toyota two-door.

Security cameras showed that she pulled out of the apartment complex parking lot, turning toward Las Vegas Boulevard. In normal traffic, it would take her fifteen minutes to get to her office off Charleston. The morning's traffic was normal, as far as the radio said.

She had a meeting in forty-five minutes and had told Rich she wanted to go early to prepare. She had told her co-worker the same thing and they planned on meeting over coffee and Danish rolls thirty minutes ahead of the meeting.

She never arrived at work.

Just before the meeting started her co-worker called Rich to see if Sandy was sick or had forgotten the meeting. Both Rich and the co-worker were instantly worried that Sandy had gotten into a wreck.

After three hours of waiting and calling hospitals and no word, Rich finally called the police. They could do nothing, but a friendly detective listened to Rich and believed him and then called Sandy's office to confirm. Clearly something had happened to Sandy, so the police put out a notice to watch for Sandy's car.

At seven in the evening, Sandy's car was found parked in the Bennington Hotel and Casino underground parking lot just off the Strip. The hotel security cam showed Sandy pulling into the lot seven minutes after she left home, locking her car, and walking calmly into the hotel.

She seemed to know where she was going and was in no hurry.

She went to an elevator, and got off on the eleventh floor. She used a key card she pulled from her small clutch purse to open the door to a room halfway down the hallway.

The room was reserved in the name of Rich Hunter, Sandy's husband, and paid for with his credit card.

Rich swore he knew nothing about it and a check of their financial records showed that was the only time such a charge had been made on either of their cards.

Sandy's behavior was very, very unusual, to say the least. Yet she seemed to be acting normally.

Almost as if she did this every day.

At two in the morning, when the police knocked on the hotel room door, no one answered and the room was empty.

The security cameras showed that no one had left that room after Sandy entered.

And no one had gone in ahead of her either.

The room had been reserved online.

Sandy had left no fingerprints in the room, but the prints from the previous couple who had stayed there were everywhere. Nothing had been wiped down or cleaned beyond the normal maid service.

There were no leads and her missing person's case went quickly cold, with only her husband trying to find out what happened to his wife.

No one had any idea why Sandy Hunter vanished.

Or how a person could simply vanish from a major Las Vegas hotel room without a trace.