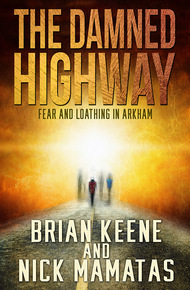 Brian Keene writes novels, comic books, stories, journalism, and other words for money. He is the author of over fifty books, mostly in the horror, crime, and fantasy genres.

His 2003 novel, The Rising, is credited (along with Robert Kirkman's The Walking Dead comic and Danny Boyle's 28 Days Later film) with inspiring pop culture's recurrent interest in zombies. Keene's books have been translated into German, Spanish, Russian, Polish, Italian, French, Taiwanese, and many other languages. He oversees Maelstrom, a small press publishing imprint specializing in collectible limited editions, via Thunderstorm Books.

He has written for such Marvel and DC properties as Thor, Doom Patrol, Justice League, Harley Quinn, Devil-Slayer, Superman, and Masters of the Universe, as well as his own critically acclaimed creator-owned comic series The Last Zombie. Keene has also written for media properties such as Doctor Who, The X-Files, Hellboy, and Aliens.

Nick Mamatas is the author of several novels, including Move Under Ground and The Second Shooter. His short fiction has appeared in Best American Mystery Stories and many other venues, and his feature reportage and essays in In These Times, Clamor, Village Voice, and other magazines.

The Damned Highway by Brian Keene and Nick Mamatas

A hilarious, shocking, terrifying thrill-ride across the American landscape, The Damned Highway combines two great flavors of weird: the gonzo journalism of Hunter S. Thompson and the uncanny terrors of H.P. Lovecraft. Horror legend Brian Keene and cult storytelling master Nick Matamas dredge up a tale of drug-fueled eldritch madness from the blackest depths of the American Nightmare. On a freaked-out bus journey to Arkham, Massachusetts, and the 1972 Presidential primary, evidence mounts that sinister forces are on the rise, led by the Cult of Cthulhu and its most prominent member - Richard M. Nixon

It was a blast to write this book with Brian Keene. We're both huge fans of Hunter S. Thompson, whose gonzo journalism found, and reveled in, the weirdness of everyday life: sports, politics, small town existence, you name it. Introducing eldritch horrors into the Presidential election of 1972 was the easy part; using this novel, originally published in 2012, as a warning of political actors to come didn't quite work out so well. – Nick Mamatas

It's an odd feeling. For the first time in my adult life, I have absolutely nothing to say. I feel like I've just been told by my general practitioner that he has good news for me, and some bad news to go along with it. Hey, hey! No prostate cancer, Lono, despite your disgusting habits in American Samoa. The bad news … well, you have testicular cancer instead. Win some, lose some. Something occurs to me then, something beyond death. I do love my country. I love all the agony, all the nonsense, every pile of twisted limbs. I love the oppression and the rebellion, the open road and filthy alleys. It just doesn't get any better than this.

"And then," I say, "after Nixon serves his term, let me guess. You swap brains again, with whoever might win in 1980."

"What?" I jerk up and nearly snap my wrists against my bonds. "Are you utterly insane? I've heard some absolute gibberish on this latest road trip, but that beats all! Ronald Reagan? He can't be president!"

"Of course he can. And he will. He's a very handsome man. Virile," Hoover says. "And after that, George H. W. Bush will be president. You know him, I'm sure. He's a gormless fellow. We have also prepared a clone for the term of the millennium. Yes, cloning has been perfected. Has been since the end of World War II. Some of Germany's best scientists gave us the technology. The clone is a real cutie. George Bush Jr., we've taken to calling him. Perhaps in the 1990s I'll play a Democrat, if just to throw off suspicion and forestall revolution. The Negroes will vote for a nice, southern-cracker type." Crakah, he says. "They will, even as he undoes the Great Society and replaces it with indentured servitude and a radically expanded prison infrastructure. Imagine a George Wallace, but with a warm smile and the appearance of human dignity. A charismatic fellow, the type who will sell you a used car while fornicating with your wife, and you'll smile and thank him for it."

"But not mine!" Hoover says. He leaps to his feet and holds the canisters high. "There are no limits to my imagination, or to my ambition! And I have a weakness too. I admit it." He turns to me, leans over me, intimate, almost ready for a kiss. "And this is it. For so many years I've toiled, an appointee, biding my time, collecting my secrets, perfecting my methods. Sharing the scope of my planning with nobody. Conspiracies within conspiracies I've discovered, some older than man itself, but none cleverer than mine. Checkmate!" He stands erect, huffing like an aged house.

"And I've never had anyone to share my vision with. Nobody save you. Rather like a pulp-fiction villain, don't you think, doctor? I used to read all the detective and crime magazines. I always wanted to give a speech, sir, and now I have. It is done. Now I'll transfer our brains into one another's bodies. Your country thanks you for your service, Lono."

Hoover moves out of my line of sight and says only, "This will tingle. Quite a bit, actually."