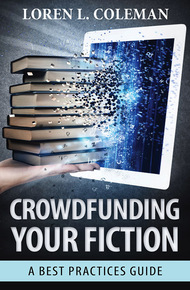 Loren L. Coleman has written over twenty-five New York-published novels and several idie-published works as well. He is also the owner-publisher of Catalyst Game Labs and the newly-formed Pulse Publishing, and through these has run several successful Kickstarter campaigns including a $2.6M campaign in 2019. He often teaches at business seminars for writers.

Crowdfunding Your Fiction is an introduction and How-to guide to opening up crowdfunding platforms as a new fiction market. It offers general strategies, advanced tips, and hands-on step-by-step guidance.

Writers always want an advance for their work, and one way to get one, so they're told, is to crowdfund. If only it were that easy. The annuls of crowdfunding platforms are littered with failed attempts at funding a brand new novel. Some people say it's impossible to crowd fund a novel or a literary work, but dozens of us have done so repeatedly. Loren has had big Kickstarters (millions of dollars) and small ones, funding everything from games to books. He has compiled a fantastic guide of crowdfunding does and don'ts. This book is indispensable. Get yours now! – Kristine Kathryn Rusch

I was learning and teaching at a writer's retreat with more than fifty other professional fiction writers. We spent several days in a classroom setting, listening as various pros taught some of the very best of their hard-earned knowledge. In the evenings, we had a "Green Room" suite where we could all hang out and talk shop. Craft. Business. Cover design. Markets.

One evening, I made a point of bringing up crowdfunding.

I already knew quite a bit on the subject, having studied crowdfunding platforms for nearly a decade while running several campaigns under Kickstarter's Tabletop Gaming category including a $2.6 Million campaign in late 2019. I had also consulted on several dozen other campaigns in the Gaming and Fiction Publishing categories, and (more recently) run my first small Publishing campaign with my son for a small Zine.

Why did I plan a $1,000 campaign only a few months after a $2.6M showing? To learn. Because I believed (and still do) that Publishing is a greatly underserved market in crowdfunding. I wanted to test some ideas and get other writers excited about the concept of a crowdfunded fiction market.

I never thought it would be such a hard sell.

This was in early 2020. At this point, the "indie" movement was well into its second decade, and many writers at this retreat were making a good-to-great living selling their story collections and novels on Amazon, through Kobo or Draft2Digital, using Patreon or Bundle Rabbit. Several writers were specialists on automated email lists, blogging, audiobooks. Self-starters. Self-promoters. Damn good writers.

When I polled the room, only four writers even admitted to trying a crowdfunding platform like Kickstarter or GoFundMe. Two related successful stories; but they did it almost apologetically.

Yeah, I ran a Kickstarter a few years ago. (Emphasis mine). I wanted help funding some new cover art for the novels I was self-publishing. But I raised only $5,000.

Me: Repeat that last sentence again. Out loud, please.

Me: Have you ever earned $5,000 from your fiction before? In just thirty days?

Me: And have you since?

Me: Have you tried running another campaign in the years since?

This was from a writer whose work I like and respect, and would read more if he would simply publish more. I'd have backed his crowdfunding campaign in a heartbeat. I wouldn't have been able to give him my money fast enough! I told him so right there, in front of a room full of other writers.

It's been over a year since that conversation.

I'm still waiting for an invite to his second campaign.

Also at this discussion was a writer I was just getting to know. Amazing fantasy work. And he could do comedy in his fiction which, believe me, isn't as easy as it sounds. He was also one of the best self-promoters I'd met at this retreat, and was shamelessly making the Amazon direct-sale POD (Print On Demand) system do things I'm not sure Amazon realized it could do. I was impressed, and I don't impress easily.

He was also managing a direct-sale email list that generated hundreds of sales at the release of each new novel or story collection. That's not a bad launch day for an indie. So, with that kind of initial push, I asked him why he hadn't tried running a Kickstarter.

Our conversation was a long (fun) and winding path. Even better when a good debater gives me such an easy last word:

It just seems like a lot of work for the reward.

Me: You've already cleared the early hurdle by developing a good marketing list of first-day buyers.

That's because I'm already on all the platforms.

This writer saw Kickstarter and other crowdfunding sites like he saw MailChimp or Drip; as a marketing platform, not a sales platform. Here's the thing, though.

Shortly after the retreat, I made a point to begin writing this Best Practices guide, leaning on what I knew running successful Tabletop campaigns, but adjusting expectations toward applying that knowledge to Publishing. I posted an early (much shorter) version on a friend's TEACHABLES web page and helped several writers plan out Publishing campaigns on Kickstarter. In the year since I've consulted on another dozen campaigns in the Fiction category and run a second successful campaign for a $12,000 gain.

I'm finding that a lot of the skills I learned studying and running Tabletop Gaming campaigns translate well into Publishing. They take a little adjustment—mostly because Publishing hasn't hit the critical mass in audience that Gaming has—but the potential is there. Every writer I help get started improves the market for us all.

That's what I'm hoping to do. Improve the market.

After you're done reading this, I hope you'll give it a try.