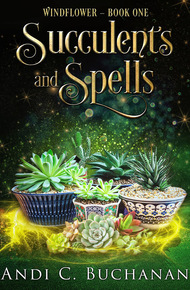 Andi C. Buchanan lives and writes just outside Wellington, New Zealand. Winner of Sir Julius Vogel Awards for From a Shadow Grave (Paper Road Press, 2019) and their short story "Girls Who Do Not Drown" (Apex, 2018), their fiction is also published in Fireside, Kaleidotrope, Glittership, and more. Their Windflower series, starting with the novella Succulents and Spells, was created as part of the Witchy Fiction collective. You can find them at https://andicbuchanan.org or @andicbuchanan on Twitter.

Laurel Windflower is a witch from a family of magic workers - but her own life is going nowhere. Living in the damp, sunless side of Aro Valley, she works in a café, unable to produce anything more powerful than the most basic herbal potions. Until, one winter morning, Marigold Nightfield knocks on her door.

Marigold is a scientist, but she knows plenty about magic. There are strange things happening in her house, and her future discoveries require careful negotiation with monsters.

Laurel ignored the knock at the door. Any time before ten was too early to expect a witch to interact with the world, in her opinion. She'd been working in the cafe until late last night, and had just finished her coffee and twisted her blue hair up under her shower cap, ready for a hot shower. She shivered as she stepped out of her dressing gown. She'd done a lot to make this flat habitable, but nothing could ease the July chill of an old flat on the sunless side of Aro Valley, pressed against the damp hillside.

Twenty minutes later Laurel was warmed and clean and the bathroom smelled of her cousin's homemade lavender and thyme soap. She pulled on her jeans and a thick brown knitted jersey and pulled open the curtains. Days off were terribly rare lately, but this time she'd turned off her phone. The sky was a bright winter blue and the breeze gentle. She was going to have a good day today. Her flatmates were at work, and she had the house to herself.

In the hallway, she stopped to check on her succulents, on top of a bookcase beneath the window. They were doing surprisingly well - healthy-looking and thick with moisture. Maybe her life was a mess in other ways, but at least she could keep a plant or two alive.

Turning to the kitchen, something caught her eye. She turned back and looked out of the window. There was someone there, sitting on the crumbling brick wall between her pots of marjoram and lemon balm. They seemed quite happy there, in a purple t-shirt despite the cold, and their hair buzzcut to almost nothing, tapping their Doc Martens against the wall.

Laurel opened the door and used her best customer service voice. "Can I help you?" she asked. So much politer than what the fuck are you doing here?

Looking up, the person on the wall scrambled to their feet. "Hello, my name is Marigold Nightfield, and I'm here to ask if I may please have some tissue samples from your monster."

Laurel sighed. All hopes for a straightforward day had just gone out of the window.

"You'd better come in," she said, clearing a load of clothes off one of the wooden chairs by the dining table, which was cramped against the kitchen wall. She hadn't been brought up to turn magic folk away; hospitality was – sometimes annoyingly – how her family worked. "I've just had the last of this morning's coffee, but would you like some tea?"

"I only really drink liquorice and fennel or lemongrass and ginger. But just hot water is fine too."

Laurel stood on tiptoe and began searching through the alarming number of half-used boxes of teabags. She checked the expiry date before offering – excellent adulting.

"This one's liquorice and star anise. Is that close enough?"

Laurel stuck with peppermint for herself, then cleared a boardgame and a stack of books from the opposite chair, and sat down.

"So, let's start this again, shall we? Who did you say you were?"

Marigold took a deep breath. "My name is Marigold Ann Nightfield. I use she/her pronouns. I'm a PhD candidate in biomedical science."

Laurel offered her hand across the table, and Marigold took it.

"Laurel Windflower. She/her as well." She didn't mention the incomplete MA she'd been postponing, for one reason or another, for the past two years. "So, is your PhD in monster biology or something?"

Marigold shook her head. Tibbs, Laurel's one-eyed, torn-eared, statistically-should-have-died-a-decade-ago cat, was sniffing around her boots. Laurel told people he was her pet, because even those who knew about witchcraft could get a bit weird about the word familiar. Marigold reached down to stroke him, and he didn't object.

"Not exactly. I'm doing a personal research project as well. And I'm trying to collect samples from as many monsters as I can, and because you're so close, I was hoping you would let—"

"It's up to the monster really. He sort of does his own thing. I assume most monsters do. Can't say I've ever made the acquaintance of another."

Laurel nodded. "Yes. Not a very interesting one, I'm afraid. They rented me this room because they thought I'd be cool with the monster. Which I guess I am, but I don't really know anything about him."

She took a long sip of her tea. She'd had to couch surf well into her second year of undergrad, before she'd found this place. The guy who was moving out wasn't from a family Laurel knew, but he'd recognised her name and knew she was a witch. She didn't see anything wrong with getting a room because of it; the market was abysmal for renters and plenty of people got a room because they could pay extra, or they owned a fridge, or because their parents knew someone. Being a witch was sometimes an advantage, but it wasn't an unfair one compared to all that.

And she had done the place plenty of good. Bit by bit her spells had vanquished the mould from the walls, and dried out the rooms, so the windows didn't leak all the time. The property manager was receptive to their requests for maintenance, and if he had any thoughts of raising the rent they disappeared as soon as he crossed the front doorway. Laurel didn't usually like nudging people's minds like that, but property managers – like Work and Income caseworkers – were an ethical exception.

The monster made some noises in the night but was otherwise no trouble. Most of the time he stayed below the floor.

"Have you seen it?" Marigold asked.

"Only from the other end of the hallway... he's pink with yellow spots, kinda furry, and according to my former flatmate, he's called Alfred."

"I'm sure it's not his chosen name. But it's weird to have someone in the flat you just call the monster, I suppose. A bit dehumanising. Even if he's not human. Anyway, anyway backtrack. You're doing a PhD? How old are you?"

It was a blunt question, but Laurel felt that when someone bangs on your door before ten in the morning, asking to take tissue samples from your monster, they've lost the right to all niceties. And besides, she had given Marigold tea.

"I'll be twenty-four in November. I know I come across young. It's because I'm autistic, and enthusiastic about things, and also because of my skin."

Laurel leaned forward, just enough to catch the scent she was expecting. "Geranium," she said, "and chamomile."

"Picked at the half-moon," confirmed Marigold. "Because you want a subtle potency, not your skin torn off. I probably started it too young, and it makes me look like a kid. Still, no acne ever! My grandmother was a witch, but my dad and I are both only children, and neither of us have magic. Probably the line will die with me. But it doesn't mean she couldn't teach me things."

Laurel smiled, despite herself. "It works, doesn't it?"

"It does." There was a pause. "So, is it okay, if Alfred doesn't have a problem with it, if I take some samples of tissue?"

"Will it injure him?"

"It's just like a big needle I use. He'll feel it, but it's not like I'm cutting him open or anything."

Laurel wanted to say that this was a ridiculous idea and usher this strange woman out of the house immediately. But right now, she couldn't think of a single good reason why, if Alfred didn't object, she should stand in Marigold's way.

Which is how it happened, that she ended up holding a stranger by the ankles of her Doc Martens boots, as said stranger stretched down the hole in the back of her wardrobe headfirst, with a syringe in her hand, talking to a monster in gentle tones.

The monster growled. The two of them went back and forth like that for a while – Marigold shuffling her body in the wardrobe, Laurel gripping her ankles.

"Got it. Pull me up, please." Then Marigold said something that was unintelligible but sounded a little like a thank you.

"Could you understand him?" Laurel asked, as Marigold dusted off her jeans.

"Random fact about me: I was born with the ability to talk to monsters."

"Nope. It's not magic, it's just… heightened processing and perception and stuff. My grandmother tested me through all the usual. I can put together a basic potion, just because I've practised enough times, but there's not a spark of magic in me, much as she'd have liked there to be."

It sounded a lot like magic to Laurel, but she wasn't going to argue with someone about their own abilities.

Later in the day, when she was stretched out on the sofa eating fish and chips with her flatmate, Connor, and feeding pieces of squid ring to Tibbs, Laurel heard a low growl from below the floor. Her ears pricked up, suddenly anxious, but then the growl settled into a contented purr, low and rumbling beneath her. Alfred may not have liked the needle, but perhaps he didn't entirely object to seeing a new face once in a while.