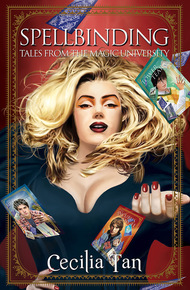 A bisexual, bigender switch, she lives in the Boston area with two partners and two cats. Find out more at www.ceciliatan.com.

Spellbinding includes 7 stories by Cecilia Tan—including two never before published!—and 10 by authors and fans she invited to come "play in her sandbox." The stories range from fanciful "what ifs" to explorations of the backgrounds of characters we don't fully learn in the course of the main novels. Through these tales we see Frost's rescue as a child, the tumultuous relationship of Dean Bell and Master Brandish, what Kyle did on his summer vacation, and much more. Representing a range of sexualities, the stories include lesbian, gay, bi, and heterosexual pairings.

I shouldn't even be able to feel lust. If I were a perfect adept at my discipline, I wouldn't.

But I am far from perfect. This is what I am thinking as I run my fingers down the unmarred skin of his chest, as I am unable to resist touching him. My fingertips are cold and his nipple crinkles as I brush my thumb back and forth.

And he makes a breathy sound that could be fear and could be desire andthatis perfect.

I have brought him to this point with all the power a ritual can bring to bear on a sacrifice's psyche. For ultimately, isn't that what gives me the power I hold? Not the blood alone, but everything that leads up to its taking?

He looks up then, and in his eyes I see what I heard. Fear and desire. Perhaps fearofdesire.

No blood mage likes to admit it, but the blood is sweeter when the sacrifice is at least a little afraid. But trust makes it sweet, too. No, I cannot explain the seeming contradiction, though many masters theses have been written on the subject.

I have removed only his shirt. I could have had him remove it himself, but that lacked ritual grace. I did it myself, one button at a time and letting my hands touch him as I took it from him.

I consider blindfolding him, but I am too selfish. I want to read all I can in those eyes. His breath catches as I tug on the nipple, not enough to hurt, just to make it harder.

I have not been erect in years, but weak as I am, blood calls to blood, and I feel my traitorous cock hardening. I will ignore it. I must. It is well hidden under the folds and layers of my ritual garments.

Understand, sex is not "forbidden." There are consequences for engaging in it which negatively impact my abilities and my training, but if I have the resources I am allowed to choose to pay that price.

Sex with this particular sacrifice, though? For me, he is untouchable. Or he should be. I know this. The thought makes my mouth water and my hands wander.

His breath shudders and I can feel him wanting to speak, to ask, but he doesn't know if he's allowed to. He wishes not to disturb the ritual if he can help it. He has consented to be the sacrifice and he wants to do a good job at it. As if I will be giving him an "A" for his performance.

Extra credit, perhaps. I stop myself before my hand can wander over the bulge in his trousers. He whimpers. I remind myself not to get too distracted and draw the needle.

Oh yes, we could have gone into the medical center. A nurse could have drawn a drop of blood from the tip of his finger and deposited it on a glass slide for me. If I were perfect.

Then again, if I were perfect, I would not need Frost's blood at all today.

I already know where I will draw the blood from his body. There are many choices, each with its own ritual significance. The tip of the finger is the shallowest of the power sources, channeling his mind more than his heart, and often more painful than it is worth.

The crook of the elbow is more vulnerable, and more potent for it.

Piercing anywhere on the penis, of course, is most potent of all, but best suited for those taking on a habitual role of sacrifice. And besides, as nearly every blood mage learns the hard way, before we learn to rein in our lusts, when the cock is erect, any break in the skin can result in spectacular and unintended desanguination. He is too hard to contemplate that.

No, the droplet I require of him will come from his nipple, which has potent symbolic significance as a source of sustenance. I will take it directly with my mouth to foment that significance.

He does not know this, though he is trying to guess. His hands are behind his back, not bound, though that would have been appropriate for some sacrifices. But I do not wish to fetter his power. I will feed from it.

The candles have made the room stiflingly warm, but I do not feel it, even under my ritual robes. He, on the other hand, is misted with sweat, and a drop slides down his chest and I am licking it before I am quite aware of doing so. The needle bites a moment later and I suckle at the teat of a young man I should not be tempting myself with so. We were supposed to be destined for one another, once, before I defied prophecy. I should not risk it. Especially not when his cries make the blood surge through me, and I bear him to the floor, arms around him, my mouth not letting go, his fingers tangled in my hair not to pull me away but to pull me closer, and Merlin and Morgana help me but I can sense with every sense including the sixth one that he has come.

I let him go and crawl backward away from him, my robes hindering me now, as the scent of his semen seems to fill me and the urge to tear open his fly and lick every drop until he is clean is so strong I am blind.

I am weak, but not that weak, and I think I will escape now, with my will and my dignity intact, when I get to my feet.

In hindsight, perhaps I should have bound him. To an altar, perhaps.

His hands are warm and quick and his mouth on my prick is enough to make me doubt I can keep my feet under me.

I am strong, but not that strong. And he sucks like he needs my seed as much as I needed his blood. At one point he looks up at me and our gazes lock, and I imagine I hear his voice in my head, asking me, or perhaps telling me, that it should be a ritualexchangeof fluid, shouldn't it?

Delilah may as well have cut my throat with a razor. We end up on the floor again, my robes askew, candles knocked over, as he sucks me to completion and then, satisfied at last, he slumps into the crook of my arm, shivering and breathing raggedly. It is a simple thing to bend my arm and pull my robes over him.

Neither of us will be moving for a while. For my part, I am immobilized by thoughts of how disastrous this is. I will be powerless for days, which was exactly the situation I had been hoping to prevent by taking his blood to begin with!

And yet, with him curled there by my side, no longer shivering but asleep, I find I cannot dwell on my regrets. I cannot bear to wake him, either. I consider slipping out of the robe entirely, leaving him wrapped in it.

But I am weak. And he is perfect. So there I stay.