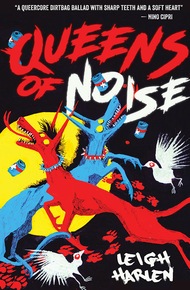 Leigh Harlen is a queer, non-binary writer of dark leaning speculative fiction who lives and works in Seattle alongside a mischief of rats, a ridiculous dog, and their partner. Their non-writing hobbies include petting strangers' dogs, crocheting, and enthusing about how awesome bats are. They are the author of the novella Queens of Noise and short story collection Blood Like Garnets. Follow them on Twitter @LeighHarlen for updates on future publications.

Queens of Noise by Leigh Harlen

In Queens of Noise, Mixi fronts the Mangy Rats, a motley found family of queers, crust punks and werecoyotes. Mixi and their band know they're gonna win the Battle of the Bands final showdown, no matter what it takes. But to make that happen, they'll also have to contend with poser goths, murderous chickens, and a bullshit corporate takeover ruining the best bar in town.

Sometimes you have to show a little fang. I try not to do it. But, once in a while, my tough aesthetic and take-no-shit attitude isn't enough to deter the truly awful and the awfully helpful. The trouble is, norms will tolerate shifters, so long as we behave ourselves. But the second we indicate that we'll bite back if someone pushes us hard enough, then they run through the streets screaming about monsters. I learned that real quick when they ran me and my pack out of Felton, calling us queers and werewolves. The queer part was right, though not sure why it was such a problem, but we were werecoyotes, not wolves. As if I could ever be one of those uptight, bougie assholes.

"Where you headed, young lady? I'll give you a lift." He had gray hair cut short, probably trying to minimize the fact it was rapidly receding, as if getting old was something to be feared instead of envied. Judging by the shitty tie covered in cartoons he was definitely somebody's dad; maybe even somebody's granddad.

He didn't leave. He and his rust-bucket car kept creeping along beside me, window down. "Come on, get in the car. It's late and a little thing like you oughtn't be out alone."

I turned towards him and shifted my face. The moon would be full tomorrow night so it was easy. Nose and mouth extended almost, but not quite into a snout, and sharp teeth pierced through my gums, pushing the dull, human teeth to the back.

"Hey mister. Who says she's alone?" Otter-Pup said, unseen. His voice poured from the bushes behind me, thin, high, and ghost-like.

The creep's eyes widened and he slammed his foot down on the gas pedal so hard that the engine screamed in protest. His tires left the stink of burning rubber in the air as he roared away.

Otter-Pup hopped out of the bushes, laughing. He was a dizzying palette of colors from his electric blue hair to his glittery purple suit to the thick rainbow of eyeshadow on his light brown eyelids. I draped my arm over his shoulders, the metal studs of his jacket snagging on the black mesh of my sleeves. That was cool, mesh looked better with some tears in it.

"Where's the rest of the pack?"

He squirmed out from under my arm to sculpt his spiked hair. "They wanted to grab drinks before the show. They're going to meet us at The Mechanical Anatomy." Seeing my face tense, he added, "They took all our gear with them."

I was not happy they'd left Otter-Pup to travel on his own, especially after the asshole I ran into, but he was an adult now. Barely. He could have gone with them or spoken up if he didn't want to walk to the show alone.

We traveled in companionable silence, excitement and nervousness sparking between us, until we arrived at The Mechanical Anatomy. The mildewed entrance had been literally carved into the remains of a staircase. The jumble of jagged, busted stairs was covered by a rickety wooden ramp. At the bottom was a bouncer in a torn t-shirt under a black leather. He crossed his massive, tattooed arms over his chest.

"Hell of a line up." He stepped aside and let us through the entryway.

Inside, the floor was sticky with old booze and the air smelled like sweat, cigarettes, and hairspray. The studded, tattooed, mostly black-clad crowd bounced and writhed with abandon to the sound of a band I had never heard before. They didn't smell like shifters, but there was a hint of magic. Witches, maybe. The screen behind them said "Baba Yaga and the Tricky Bitches" in red letters that looked like they'd been carved into skin with a knife. They were pretty good, especially the lead singer. Every bit of her visible skin was covered in tattoos of animals in different art styles. Some were stick 'n poke, others American Traditional, a couple Japanese-style, and one hyper realistic chicken spread across her chest. I was bad at judging how old someone was, but she was young. Fuck, all the bands seemed young to me now. Thirty-three was practically dead in punk years.

Gemini slipped through the crowd towards us, their eyes wide with a look that said, "Un-fucking-believable." We'd been a band together long before the whole werecoyote thing happened and they were the closest to my age, with black skin and an electric pink mohawk. They were a huge nerd. Tonight, they were dressed like a punk rock Sherlock Holmes with a ripped plaid jacket that hung down to their calves and decorated with spikes, buttons, and patches.

They grabbed my arm and leaned in, their whiskey and menthol breath tickled my nose. "R and the wolves are here."

"Shit. Are they playing?"

"Well, toss back a shot because we're going to have to kick some ass tonight," I said.

Gemini grinned, a hint of fang popping through their gums.

"I know the full moon is coming, but keep it in check. We're here to play, not pick a fight."

I glared at them. I wasn't sure when the nickname Mama C started. But at my protests that I was nobody's Mama, it turned into Mx. C which became Mixi. Only Gemini still got away with calling me Mama C, usually when I was being protective or bossy.

"Where's everybody else?" Otter-Pup asked.

"Keeping an eye on our gear. Just in case the wolves try something."

We fought our way to the bar. "Double shot of tequila for me, whatever beer is the cheapest mixed with cider for him, and a whiskey shot for them." I pointed at Otter-Pup and Gemini respectively.

The bartender poured and handed the drinks to us. "Ten bucks," she said.

"Four bucks. That one already drank their comped drinks."

I glared at Gemini who smiled and shrugged. "This is coming out of your cut if we win," I said.