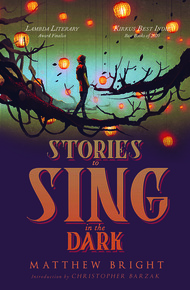 Matthew Bright is a writer, editor and designer who's never too sure what order those words should appear in. His fiction has appeared in multiple venues, including Tor.com, Nightmare, Lightspeed, Glittership, Steampunk World, Harlot and many more. His collection, Stories To Sing In The Dark was a finalist for the Lambda Literary Award and named on of Kirkus's Best Indie Books of 2020. He's the editor of a number of anthologies including The Myriad Carnival, Threesome, Clockwork Cairo and Lambda Literary finalist Gents. He pays the bills as a book and cover designer. Find him at matthew-bright.com // @mbrightwriter, and his design work at inkspiraldesign.co.uk // @inkspiraldesign.

Stories to Sing in the Dark by Matthew Bright

The speculative shines bright in the dark with these stories by Matthew Bright: a boy with a secret begins work at a strange library housing all the books never written; Dorian Gray's love of beauty struggles in the face of AIDs-era San Francisco and the Castro; the tomb of an Empress is adrift in space, her concubines aboard with her succumbing to hungers of the heart and the body; two men in an old film finally realize that they are trapped but still they seek the means for finally declaring their love for each other; the last drag show on earth plays out amongst the ruins and ghosts of those that have gone before. These and other tales of the queer fantastic are the perfect bedfellows for the deep, dark night.

I'm not in the photograph. I was off to the side, picture of disinterest, smoking a cigarette, watching passers-by. That was how I passed my days in that part of the century, hovering on the street corner in sight of all those colours. I remember the photographer—button-down shirt, round glasses, mussed hair, the look of someone born away from this city. He was beautiful.

The men were clenched around the window, where the sign had been taped. The photographer's camera clicked, and there they were, stock still in black and white forever. You might have seen the photograph. There's a good chance, now that we good men of the Castro are the immortalised nameless. Books, documentaries—hell, postcards, probably. This photograph was the vanguard, you see. The seraph's trumpet. Bad times, they were a-coming.

The photographer lowered his camera to roll on the film, and I drew close, unobserved. My eye was on one of the men of the gathering, a hand on his waist as I read, but when I stepped into their circle that feeling—that incessant dressing down, dressing up, undressing behind the eyes—drained away.

There were three photographs, close-ups of body parts, inflicted with vicious looking welts, dark and sick. I'd never seen anything like them before, and I'd lived through them all. Tuberculosis, scarlet fever, influenza—all the greats. Lesions, they're called. Sarcoma. We didn't know that at the time.

Instead, the poster was labelled, in neat felt-tip capitals, "GAY CANCER." The photographs were of the man who had made the poster, whoever who was. These were the symptoms inflicted on him, all over his narrow body. The poster was a warning.

The camera whirred again, and I turned to face the photographer. He snapped another.

I've seen that photograph, although you won't have. I've tossed back my long hair, and I'm looking straight into the camera. My eyes are quietly confident in the shadows of the sockets. I look fabulous. The other men are still behind me, reading the poster. Concern and fear is in their frame, their worried looks at each other. They're all dead now.

"Good morning," I said to the photographer. "If it's not too bold, sir, I'd like to tell you that you are an uncommonly beautiful specimen of manhood."

"I know," he said, and matched my smile. "But I appreciate hearing it in such an English way." He raised the camera, but I put a hand up to block it, lifting it out of his hands. "You're a long way from home, Lord Fauntleroy."

"I always am," I said, "though that's not my name." I circled him, and lifted the camera up to my eye, pressing the button and capturing him in the frame.

In that one, you can see what's not quite clear in that first—more famous—photograph. The words at the bottom of the page. "Be warned," the felt tip letters read. "There's something out there."