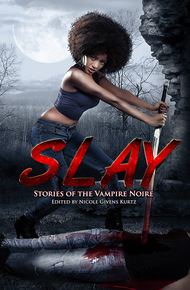 Nicole Givens Kurtz is an author, editor, and educator. She's the recipient of the Horror Writers Association's Diversity Grant. She's been named as one of Book Riot's Best Black Indie SFF Writers. She's also the editor of the groundbreaking anthology, SLAY: Stories of the Vampire Noire. Her novels have been a finalist in the Dream Realm Awards, Fresh Voices, and EPPIE Awards for science fiction. She's written for White Wolf, Bram Stoker Finalist in Horror Anthology, Sycorax's Daughters, and Realm's The Vela: Salvation series. Nicole has over 40 short stories published as well as numerous novels and three active speculative mystery series. She's a member of Horror Writers Association, Sisters in Crime, and Science Fiction Writers of America. You can support her work via Patreon and find more about her at http://www.nicolegivenskurtz.net.

Mocha Memoirs Press is proud to present SLAY: Stories of the Vampire Noire — a revolutionary anthology celebrating vampires of the African Diaspora. SLAY is a groundbreaking unique collection and will be a must-have for vampire lovers all over the world. SLAY aims to be the first anthology of its kind. Few creatures in contemporary horror are as compelling as the vampire, who manages to captivate us in a simultaneous state of fear and desire. Drawing from a variety of cultural and mythological backgrounds, SLAY dares to imagine a world of horror and wonder where Black protagonists take center stage — as vampires, as hunters, as heroes. From immortal African deities to resistance fighters; matriarchal vampire broods to monster hunting fathers; coming of age stories to end of life stories, SLAY is a groundbreaking Afrocentric vampire anthology celebrating the rich cultural heritage of the African Diaspora.

There's a reason we keep reading about vampires. Their timeless takes on life are often cover for impressions on our own period and the ones that came before. There's of course potential for more and here is where we start to see it—fresh perspectives on what it means to be undead, to feed upon others for your own survival, to hunt vampires and to live amongst them—all from an Afrocentric perspective. You read that correctly. – Tenea D. Johnson

The Bellona Heights Apartments were rundown. The pavement of the open semi-courtyard had cracks, concrete wounds that oozed out moss and straggling weeds. An old fountain, spattered with bird droppings, was filled with stagnant rainwater and trash. The first level beige brick had graffiti, scrawls of obscene words and nonsense shapes scrawled across it. The balconies that faced the courtyard were over-stuffed with plants, bicycles and rusting lawn furniture. The cornices were crumbling. Hiphop and Reggaeton blasted from open windows.

Tituba shuddered in revulsion. But she had no choice, did she?

You get what you pay for, she thought, and a one bedroom in Bellona Heights was what she could afford. At least she'd found a place to live on such short notice. Her sister's new boyfriend, Vaughn, had threatened to change the locks one too many times.

Tituba loved her sister Leah, but her choice in men was terrible.

At least Juan, the last one, didn't misgender her. Yes, this place was below her standards, but, she reasoned, the lease was only for one year. And surely, she could find a more suitable place by then?

Inside the building, Tituba saw worn linoleum and the chipped paint on the walls. She picked up her keys at the office from a sullen clerk who couldn't pull her eyes away from a game on her phone, and rode the old gear-grinding elevator up to the fourteenth floor. Phantom odors drifted down the hallway: weed, old fried fish and of course, boiled cabbage. Boiled cabbage was the smell of despair and deferred dreams.

1412 was semi-furnished, with a futon/couch frame and dresser-drawers. It was on the other side of the building, so there was no balcony. The window faced the alley, which was full of

At least it was clean, for the most part. The only visible flaw was the discoloration right outside the air-conditioning vent.

Carmine smears dribbled from the grate. Tituba touched it before she thought better of it. She felt a powdery dust on her fingertips, surprised to find that it was not dried paint or even worse, blood.

Abiana was late, as she always was. Tituba had been sitting at the cafe for a good fifteen minutes. She entered the space with a dramatic flair, her face wrapped in a bright orange scarf, and wearing bejeweled sunglasses. Her hands were encased in some silvery gloves. Heads turned, whispers came up from the other tables. She always wanted to be noticed. While Tituba had her moments, for the most part she wanted to be left alone.

Fabiana air-kissed her and then ordered an Americano and a low-fat blueberry muffin. She ignored both of the items.

"How's the new place? And when's the housewarming?"

Fabiana asked her as she removed her sunglasses, revealing violet-colored contact lenses.

"The place is ratchet, so there will not be a housewarming party. Leah and that scrub Vaughn practically tossed me out into the street."

"I thought Leah had your back," Fabiana said.

"She usually does," Tituba said, "when she's not dick-a-matized. Vaughn pitched a fit when one of his boys asked him for my number. He threw around the words, 'she-male,' and tranny and accused me of flirting. Leah didn't stop him. She became a whole other person. Meek and useless."

"Girl, if he had called me those names, I'd have sliced him up. I still carry my knife, in case anyone is fixing to get smart with me!"

"Trust me, it got ugly. He was all, 'What type of crazy name is Tituba?' Frankly, I was angrier at my sister than I was at him. I felt betrayed."

"I'm so sorry for you," Fabiana said. "Do you want me to do something to teach this dude a lesson? I know some people."

"No," she replied. "I guess this is part of my journey. I thought I'd lucked out and wouldn't have to go through people around me rejecting who I was."

"I don't blame you," Fabiana replied. She finally ate a bite of her muffin. A tiny bird bite. "You sleeping alright?" she asked.

"Them bags under your eyes, child. You know what will fix them? Hemorrhoid cream. It tightens the skin."

"I am not about to put ass cream under my eyes!" Tituba said.

Both of them laughed loudly, causing the other café patrons to glance in their direction.

Tituba swatted at her hand. "Oh, hush. Seriously, though.

Falling asleep isn't the problem. Hell, staying asleep isn't, either. I sleep, but I wake up tired, as if I had a tough work out at the gym or gone a few rounds with a boxer. And when I wake up, there's always some weird reddish dust on me. And it's not just me. My neighbors all look...drained. One day, I saw a kid at the bus stop and his collar had stains of that red dust."

"Huh," said Fabiana. "Have you heard about Sick Building Syndrome? It's a place where all of the occupants get headaches and permanent sniffles. And fatigue. I think the Post did a series about it — one of the buildings owned by the EPA had it, and they had to close it."

"The effing Environmental Protection Agency had a 'sick building?'"

"You have to get out of there," Fabiana said, "Or, you need to get all Norma Rae on the building supervisor!"

Dust! Miles and miles, dune after dune of rust-red, as far as her eye could see. A red that was the color of old blood, slowly changing from crimson to brown.

She stood knee-deep in the middle of a valley, surrounded by mounds of the stuff. The sky above was hidden, obscured by a veil of red powder. She was sinking under, unable to get purchase on the feathery ground. The clothes she wore were reduced to blood-stained rags. It looked like she was shedding a membranous skin, like a snake. Her skin had abrasions, a network of thin cuts that were crusted over and flaking.

She must move on, before being swallowed whole by the wavering ground. If she didn't move, she would drown and die, forever preserved beneath, a beautiful mummy no-one would ever see. She must move, or else she would die.

She lifted one foot clear of the squelching redness. And the wind began to blow. Dust rose up into the air, into a corrosive mist that erased her body. Soon, she could not see anything. All was lost in the simoom.