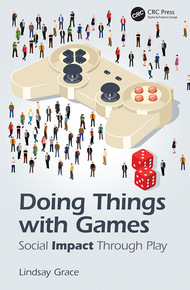 Lindsay Grace is Knight Chair of Interactive Media and an associate professor at the University of Miami School of Communication. He is Vice President of the Higher Education Video Game Alliance, and founded the American University Game Lab and Studio, which completed hundreds of thousands of dollars in purpose driven play designs annually. Clients included the US National Institutes of Mental Health (NIMH), the Educational Testing Service (ETS), The World Bank, VOX Media and others. His personal creative work has received awards and recognition from the Games for Change Festival, the Digital Diversity Network, the Association of Computing Machinery's digital arts community, Black Enterprise and others. This work has been selected for showcase internationally including New York, Paris, Sao Paolo, Singapore, Chicago, Vancouver, Istanbul, and more. Lindsay curated or co curated the Blank Arcade exhibits (2015-2019), Smithsonian American Art Museum's SAAM Arcade (2014-2017), the Games for Change Civic and Social Impact (2017) and others. He has given talks and keynotes at the Game Developers Conference (GDC), SXSW, the Games for Change Festival, the Online News Association, the Society for News Design, Smithsonian Institutes, and many other industry events. His opinions on games have been offered by CNN, Al-Jazeera, National Public Radio and others. He has been teaching games and interactive media design for more than a decade.

Games are no longer virtual toys. Lindsay D. Grace outlines the fundamentals of designing games intended to have a social impact with a focus on indie developers and college students dreaming of games that could make a difference. – David L. Craddock

There are many different ways to describe social impact games and play. This chapter introduces you to those uses and briefly explains the concepts needed to understand the power of play, the ways in which play is understood, and how designers can employ the design of play for toys, interactives, and games. This chapter serves as a basic orientation.

1.1 WHY USE SOCIAL IMPACT PLAY?

If you've started reading this book, there's a good chance you have an idea or interest in employing play for some purpose. This may be social impact, training, health, empathy, or some other aim. If you need the simplest answer as to why—the answer is engagement. After more than a decade researching impact, play, and audiences, there's a very simple way of explaining the value of games and social impact. Readers read, viewers watch, and players do.

Play is active. Playing a game requires full attention during play. It is not a passive medium. Unlike television, for example, players do not typically leave a game playing itself while they prepare breakfast. They do not fall asleep to a game as white noise. Play demands our attention. Play demands action. How appropriate then, that those looking to demand the attention of an audience employ play through games.

As for reading, it remains one of the most common ways to disseminate information. The irony of writing a book about games, yet championing the value of play, is not lost here. The challenge in a global society is that reading requires literacy. If something is written in a language you don't understand, it requires translation. This is the literacy challenge of the written word. If that something is data-driven or mathematical, it may likewise require a kind of data or numerical literacy. Statistics, for example, are often as widely misunderstood as they are quoted, shared, or littered in conversation. If literacy focuses on a specific domain, it may require additional reading. For some, reading is engaging, for others, it is inaccessible because they don't know the language.

Play, however, can be more universal. Psychologists identify play as essential to development. Play is common to many animals, including the human animal. Play is not limited by language and often does not require it. Play is also part of learning. It is something that pervades cultures globally. Play is practiced by all humans, to varying extents.

Play requires a kind of ludo-literacy or understanding of how to play. The benefit of ludo-literacy is that can require very little instruction. It can serve as a more universal language than the most well-spoken languages in the world. American television personality and minister, Fred Rogers of the famed Mister Rogers' Neighborhood show frames it thus, "Play is often talked about as if it were a relief from serious learning. But for children play is serious learning. Play is really the work of childhood" (Moore, 2014).

If play is the work of childhood, then ludo-literacy is perhaps one of humanity's native languages. Play is a way of understanding and a way of explaining. Play and relationship games function as a way for players to understand and designers to explain. We play with ideas to understand

and explore them, we play with objects to know their properties, and we role play to examine the complexities of human interaction. There are so many ways we play on a daily basis, that we forget play is present. It might be the joke we shared, the meme we reposted, the crumpled paper we offer as a layup to the trash bin, or the hours we play swiping on mobile phones or saving the world on our home console.

Until relatively recently in human history, play was discarded as a childish thing that must be left behind when entering adulthood. This is a myopic view of play. It fails to recognize the powers of play demonstrated through research in psychology (Brown, 2009), anthropology (Huizingha, 2014), and art (Melissinos and O'Rourke, 2012). Play is not the activity that bookends the frivolity of childhood and the leisure of retirement. It is not merely building blocks, throw-catch volleyball, bocce, or shuffleboard. It is the way we find flow, alleviate stress, explore new concepts, and understand the world around us.

As Brian Sutton Smith, author of more than ten academic books on play put it—"the opposite of play isn't work, it's depression" (2009). This oft-cited reference reminds us of one important thing—work is necessary, but play is too. If you want to create impact, creating impact through play should be in your toolset. Just as we play with an idea or concept, impact can come from employing play. The serious work of social impact is not in opposition to play, it is a tool to its success.