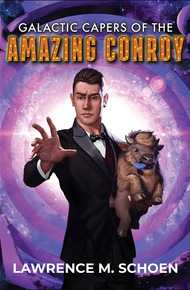 Lawrence M. Schoen holds a Ph.D. in cognitive psychology, is a past Astounding, Hugo, and Nebula, nominee, twice won the Cóyotl award for best novel, founded the Klingon Language Institute, and occasionally does work as a hypnotherapist specializing in authors' issues.

His science fiction includes many light and humorous adventures of a space-faring stage hypnotist and his alien animal companion. Other works take a very different tone, exploring aspects of determinism and free will, generally redefining the continua between life and death. Sometimes he blurs the funny and the serious. Lawrence lives near Philadelphia, Pennsylvania with his wife and their dog.

Galactic Capers of the Amazing Conroy by Lawrence M. Schoen

When not running the company he accidentally founded, the Amazing Conroy, the greatest hypnotist in Human Space, travels the galaxy with his buffalito companion animal, Reggie, trancing aliens and searching for the next great meal. And yet, at every stop, he finds his life, his love, or his fortune on the line.

The current volume collects four novellas, each a past finalist for the coveted Nebula Award. Whether he's wandering amidst the offerings at a planetary barbecue festival or aiding a little girl with a deadly alien power, uncovering the true origins of the Mayan calendar or upending a black market auction for a bottle of the galaxy's most unobtainable liqueur, or just surrendering himself to alien justice to save Reggie, the adventures of the Amazing Conroy are a blend of mind control, mayhem, and metaphor that will keep you entertained.

•Space opera and humor can be a wonderful combination, as demonstrated by this collection of novellas. The premise alone makes me laugh: a hypnotist and his "buffalito" pal, Reggie, travel the galaxy, trancing aliens and searching for the next great meal. I would love this book even if every novella in it wasn't a Nebula Award finalist (which shows the high level of writing—and pure fun—you can expect in this collection. Schoen's unique voice as a writer (like his unique voice when you meet him in person, for that matter!) shines through in a crowded marketplace and makes you crave more of the fun, frenetic adventures he writes so well. – Robert Jeschonek

Most security scans mistake buffalo dogs for bombs — really powerful bombs — and respond with a cacophony of alarms. Which is why I'd pulled Reggie from my carpet bag where he'd been since we disembarked and carried him under one arm. The bag took its place in the queue of the security scanner and we waited our turn in the customs line for the Higgins arcology on Triton, a hypnotist-turned CEO and his alien companion animal. We were fourth from the front, my bag just short of the scanner housing, when sirens began blaring and lights started flashing. My buffalito turned his head and gave me a look of utter innocence, but I knew Reggie wasn't responsible for the ruckus.

Which meant that someone ahead of us had attempted to smuggle a bomb into the pressurized city of the arcology.

A three-person security squad jumped into action, wrestling the couple at the front of the line to the ground. It was only after taking them down that they saw their error. They'd have been better served tackling the third person, the fellow who now had one hand wrapped around a black cylinder about the size of a roll of quarters with a shiny red button on the top and his thumb alongside the button. He reached into the scanner housing, yanking free the briefcase that had triggered the alarm. He hugged it to his chest as he shouted something in a language I didn't know.

When he pressed the red button an automated voice began speaking softly in Traveler — which I did understand — a string of descending numbers, a countdown. It had started at sixty.

Around me people screamed, pointed, ran away, or some combination of the three. I wasn't so much standing my ground as trying to contain a panicking buffalito who moments before had been napping. In front of me, my old friend LeftJohn Mocker muttered "what are the odds?" seconds before he tapped our would-be bomber on the shoulder from behind. The man whirled and LeftJohn punched him in the face. He landed a second blow to the man's solar plexus and stomped on his ankle for good measure. The detonator tumbled through the air and LeftJohn grabbed the briefcase. Bomber guy lunged to reclaim it and LeftJohn struck him with it. The impact caused the case's latch to pop and the lid sprang open. A grey-green ceramic box with a gleaming countdown display that matched the spoken one flew from it. The Mocker caught it and handed it to me.

I juggled my buffalito around and presented the bomb to him. "Come on, boy, time for lunch."

Obligingly he opened wide and leaned in, closing his mouth around a corner of the box. He bit through it as if it were meringue. The counter had dropped down to the forties.

"I need you to eat a bit quicker. Fast food, Reggie."

Two bites later and a new siren joined the noise. If I were a betting man I'd have said Reggie had bitten through some shielding and now radiation was pouring through. I pressed the remains of the box into his mouth, encouraging him to eat faster. He finished it with time to spare and beamed at me as I praised him. I also kept one hand on his muzzle to keep his mouth closed until I was sure he'd swallowed everything. Whatever fissionable bits had once been a bomb were now safe and secure inside his stomach. The same alien hide that made buffalitos impenetrable to external scans also kept anything unpleasant from leaking out.