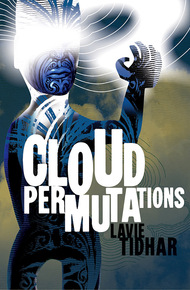 The world of Heven was populated, centuries ago, by Melanesian settlers from distant Earth. It is a peaceful, quiet world – yet it harbours ancient secrets.

Kai just wants to fly. But flying is the one thing forbidden on Heven – a world dominated by the mysterious, ever present clouds in the skies. What do they hide? For Kai, finding the answer might mean his death – but how far will you go to realise your dreams?

Set against the breathtaking vista of a world filled with mystery and magic, Cloud Permutations is a planetary romance with a unique South Pacific flavour, filled with mythic monsters, ancient alien artefacts, floating islands and a quest to find a legendary tower… whatever the cost.

I wrote this while living in Vanuatu for a while and it's inspired by the legends of the place but in a science fiction story I am still very fond of so, if you don't mind, I included it here. – Lavie Tidhar

Chapter 1: LONG EPI AILAN I BIN STAP WAN MAN BLONG MAJIK ON THE ISLAND OF EPI THERE LIVED A MAGICIAN.

The magician was tall and thin and looked rather like a snake-bean. Ragged white dreadlocks fell from around the narrow bald dome of his head, and a small, slightly wan smile on his face spoke of days spent performing in front of greater audiences than these. Nevertheless, he performed magic, and he did it well.

The magician's name is not recorded. This, in the history of Kal, is merely an oral account, and may be apocryphal.

Kal watched enthralled. The magician had just made a handkerchief disappear in the palm of his hand, and had launched into a long and convoluted story which told of the handkerchief (a blue one) belonging to the sea, and how the water in the sea rises to become clouds (there were murmurs at this, which the magician ignored), and the clouds make rain, and the rain falls down to the land, and makes trees grow …

All of which went to aid the magician's next move, which was to detach a leaf from the nearby tree, wrap it around his left thumb (making a fist around it with his right hand) and then proceed to pull out from the hole the same blue—if slightly wrinkled now—handkerchief.

Kal applauded. Beside him, his grandfather shook his head. 'Hemi no mekem tru majik,' he said. He doesn't make true magic.

'Be hankajif—' Kal said—But the handkerchief!—and began to explain, about the rain, and the ocean, and the clouds, and—

'Clouds?' Kal's grandfather said. In front of them the magician, sweating slightly now, was showily shuffling a pack of cards. 'One shouldn't talk lightly of clouds.'

Kal was about to protest, when he saw his grandfather fall quiet (a thing not of sound but of the whole body) and with him the others in the audience. Finally, even the magician's constant patter trickled to a halt, and the cards in his hands, too, fell silent and unmoving.

Coming slowly through the open ground to the left of them, not from the village but from the trail through the bush that led up to the high mountain, was a man Kal had not seen before. The man was small, and his head was entirely bald. Though black, his skin was different to Kal's and the others'. Blue, Kal thought. His skin was a deep, dark blue, a shade fading into black and yet—and yet other. And his head—as the man approached Kal could see that his head was criss-crossed with faint white lines, and now that he looked he saw that they extended downwards, all the way down the man's naked body, so that he looked strangely like—

A cloud, Kal thought. There was something hard about the man, and yet, something that resembled cloud. He looked up at the sky, disconcerted, and saw the giant clouds spread out against the sky, enormous and patient.

There was a gust of wind. It blew the cards from the magician's hands and sent them billowing in a cloud towards the sea. The man coming through the bush seemed to smile, very slightly, as he came slowly closer. He seemed in no hurry.

Then he was suddenly there, as if he had always stood amongst them, and the crowd parted before him like water receding from a shore. The man walked towards the magician, the same slight, unreadable smile on his face. Half-way to his destination, however, he paused.

He had stopped beside Kal. Turning, the man looked at Kal (they were almost of the same height, Kal realised suddenly) then turned to Kal's grandfather. Inching his head towards the boy, the man murmured, 'Wanem nem blong hem?'—What is his name?—and before Kal's grandfather could answer Kal said, quite loudly, and clearly, 'My name is Kalbaben.'

The man who had come from the bush smiled. Years later, Kal still remembered that smile. 'I will see you again, Kalbaben,' the man murmured. Then he continued on his way.

Isolated now, less by his role as performer than by the sudden abandonment of him by his audience, the magician stood alone. At his back was the sea, a vast blue glittering stillness, and the shades of the islands of Nouvelle Ambrym and Northern Efate. The man from the bush moved a little way further, stepping from dry land into wet sand, leaving behind him a line of small feet-marks.

'Solwota—' said the man, which meant Salt-Water, or Sea, or Ocean, 'hemi go ap, hemi mekem klaod—' and Kal smiled, because the man from the bush was making fun of the magician now, with his tale of the blue handkerchief that became water became cloud became rain—'mo man, hemi semak.'

At this, a murmur rose in the crowd, as rhythmic as the sea. Kal was confused. What did he mean, man was the same? Men did not—

Then the man who came from the bush lifted his arms. Above his head, the giant clouds seemed to stir, like a waking leviathan shaking off sleep.

The sun dimmed. And faint rain began to fall.

The rain fell, and as it did it grew in volume and intensity. It fell on Kal and his grandfather and the rest of the crowd, and drenched them. The drops were warm and heavy and when they touched Kal's skin they brought with them strange sensations and thoughts, confusing him. Later, in the night, they evaded his dreams still, in big incomprehensible chunks, as if his brain was trying to digest the dreams of something far bigger than himself.

The rain fell, also, on the magician, making his soaked dreadlocks appear like loose branches giving weight under a downpour.

The magician, his face tired, merely stood there. Like everyone else, he was looking at the man who had come in from the bush.

Alone, he stood on the shore of the great sea. Above him the immense, all-encompassing clouds shifted lazily, turning from dark to light as water fell from them onto the land. The man's hands continued to be raised. The white lines on his skin grew in tone, and the blueness of his skin, too, seemed more pronounced; he seemed to become sea, become sky, become rain.

As Kal watched, the man's body seemed to lighten, the way the clouds above were turning light. The rain fell not on him, but from him—he had become water! Kal thought. The man had become drops of water, and was falling into the sky. You may have seen Wasarak's painting of the scene, which for a time was reproduced endlessly.

It was from that moment on, when he saw the blue-white man turn to rain and fall away into the sky, that Kal had one ambition, one desire that would pilot a course for his voyage through the sea of his life: he wanted to fly. He was three years old at the time.