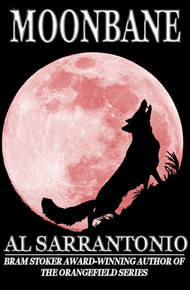 His novels, spanning the horror, science fiction, fantasy, mystery and western genres, include Moonbane, Skeletons, House Haunted, the Five Worlds trilogy, the Masters of Mars trilogy, West Texas, and the Orangefield Halloween trilogy. His stories have been collected in Toybox, Hornets and Others, and Halloween and Other Seasons. He has had numerous book club sales, and his work has been translated into more than a dozen languages and appeared in comic book form.

One cold winter night, Jason Blake and his son, Richie, are drawn outdoors by a magical sight: a meteor shower so bright, so long-lasting that they can scarcely believe it is a natural event. They are thrilled when one of the golden rocks falls into the field behind their rented farmhouse…

But before the night is over, Jason's wife is brutally murdered and his son is hideously transformed as every man, woman and child on Earth becomes the helpless prey of an ancient pack of beings with an insatiable appetite for destruction and blood.

Now Jason must survive a perilous trek across a wasteland of mounting horrors to locate a small band of scientists and soldiers with a bold plan to stop the monstrous invasion – and the monster within themselves.

Moonbane is, at its heart, a novel of the love between a man and his son. It's a novel of survival, and crazy alien terror. It's a book rife with poignant moments of clarity, where the façade of civilized life is torn away, and everything that was true has become skewed and deadly. You will never look at the moon again without shivering. – David Niall Wilson

By the bushes, moving on around to the back of the house, was something tall and stooped, with the grace of an athlete, the head of a dog, long limbs, large paws.

Then it was gone.

I moved to the other window. I slowly turned the blinds, and they revealed the beast standing on the other side of the window glass, staring in at me.

This was not the face of a dog, or even a wolf. There was too much intelligence in it for any animal. It was a face that made me think of fire. It was all eyes and teeth, the eyes wide, yellow unending flame, the teeth long white razors.

I was sure it would slam through the window glass, clutch me in its teeth, and devour me. I watched its body tense, its eyes go deep and wide with hunger—

“Jase? Can you see anything?” Emily called from out front.

The beast gave a sudden unearthly howl and leapt away from the window.

She was just nudging her way past the Christmas tree when the front picture window exploded toward her. She never had a chance to raise the shotgun. There was an implosion of glass and wood frame as the window shattered.

It was over almost before it began. There was a blur of movement—huge yellow eyes, piranha-like teeth, upraised claws, a dark-haired body. Its mouth was open impossibly wide. It made an unearthly sound, something between a scream and a howl of triumph, and Emily was engulfed by the beast.

There was no chance to save her. I had barely taken a step toward her when the thing’s paws had lowered in frightfully swift arcs, talons extended like sabers, and blood exploded around her. Then its teeth were upon her. She didn’t even have time to cry out. The shotgun dropped uselessly to the floor at her feet, followed by her severed arms. Then the rest of her seemed to disappear in a haze of blood and ripped flesh. I saw her dying eyes turn to find Richie, and then she was gone. The monster fell to her corpse like a mongrel crazed with hunger and death lust.

Despite the horror of what I had seen, my only thought was to save my son. I lifted Richie from the couch and ran to the kitchen, throwing open the door to the cellar. I snapped on the light and struggled to secure the door behind me. I felt how flimsy it was; a cheap security lock set into a glued sandwich of wood chip and veneered oak. It would barely hold back a grammar-school child, never mind the raving horror that at this moment stood howling in my living room.

I turned the lock on the outside of the door and closed it nevertheless. Cradling my son, I brought him down and lay him on an old couch that butted one wall of the rumpus room I had put together. I ran to the workshop at the other end of the cellar, grabbed two strong two-by-fours and an armful of wood pieces scattered about along with nails and a hammer.

I bounded up the stairs and pounded the two-by-fours across the door, then nailed the smaller pieces around the circumference. It was the best I could do, but I doubted it would be enough. Sounds still issued from the front room of the house. I returned to the rumpus room to find Richie asleep, his breathing regular.

I put my hand gently on his head. “Oh, Richie,” I said, and suddenly I began to tremble.

Shock is an inefficient biological method of protection. There is a threshold of terror beyond which shock will dissolve and throw the patient into a more heightened reality.

I sat helpless on the edge of the couch, the one my wife and I had bought the week before our marriage, the one we had had our first argument over (a silly fight over fabric, corduroy versus a silky rose pattern she favored; she had won, and for the next year I harbored a barely hidden resentment that sometimes flared into outright ammunition during subsequent fights), and now, though my own death be near, all I could think of was that fight, and how I had acted like a schoolboy after losing. I had once written of that other Emily, Emily Dickinson, transmuting my love for my wife into a feigned bond with the dead poet of Amherst:

Do I know you?

Do I really feel

Your life was mine—

Lie with me now.

Were you tortured, shy?

Or was your anguish deeper still—

A boldness of mind

Can I say these things without a lie?

Were your dashes all mistakes—

Or rather helpless insecurities Caught in vain ice?

And now my own Emily was gone.