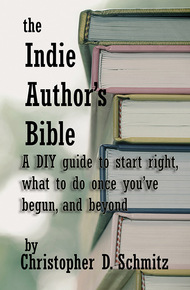 Christopher D. Schmitz is the traditionally published and self-published author of both fiction and nonfiction. When he is not writing or working with teenagers he might be found at comic conventions as a panelist or guest. He has been featured on television, podcasts, and every other medium he can get into. He runs a blog for indie authors and has published more than 40 books.

​In addition to writing Sci-Fi, Fantasy, and just about every genre in between, Schmitz free-lances for local newspapers and is available for speaking engagements, interviews, etc. via the contact form and links on his website or via social media.

The Indie world is a jungle and there are few well-beaten paths—and unlike you'd expect, even some of those well-beaten paths end in spike pits. If you want to navigate it safely, you might find a guide... like this book.

This is a guide features step-by-step advice to help any writer take their idea all the way to paperback. It also covers some of the "why" aspects and peeks beneath the scenes showing failures, successes, inside information, and encouragement for the ultimate do-it-yourselfer.

You've probably seen a boatload of articles and blogs talking about how XYZ sold 9,000 copies in one week, or how ZYX topped a bestseller list, or how YXZ gained a gazillion email and twitter followers with one simple, "must see to believe," sure-fire formula.

Here's why I'm writing this book: all of that is crap. Those "magic bullets" or "special classes" or course materials validated by seemingly impressive credentials are mostly junk meant to get you to click a link or surrender your email address. Don't they work? Maybe… but like less than 1% of the time. Getting repeatedly burned by empty promises proves very disheartening; it's easy to think that somehow you failed to make the "quick and easy/can't lose tactic" succeed. Those promoted methods are nearly always written by the exception, rather than the rule. This book is written by a real indie author. One who made lots of mistakes. One who tried a bunch of those special programs and newsletters. One whose journey is probably a lot like yours has been/will be.

A few years back I learned to play the bagpipes and went in search of my first set to purchase (I'll reference piping a few times as it taught me many life lessons). I came across many teachers offering advice. One piece stuck with me about the "quick and easy path." A low-cost set of quality bagpipes is about a thousand bucks. If you hop onto eBay or Amazon you will see numerous listings ranging from $100-$200. Those are what we call Paki-pipes (made by low-cost imitators in Pakistan and surrounding regions.) They don't quite work right. I have a pair that I got for free after learning to play properly and players with proper skills can make them sound close to how they should… this teacher, however, stated, "in the decades I've been teaching, no student that ever tried to learn on a set of Paki Pipes stayed with it. They each became frustrated and quit because the things would never work and sound right."

Those pipers quit on a dream because their frustration outgrew their passion. Don't buy into the idea that the "exception" is the norm—that's some guy selling Paki Pipes. Look for the rule rather than the exception and know that big success requires sacrifice, effort, and proper investment.

This book is mostly a chronicle of things that I've tried and learned as I bumbled my way through the writing indiesphere and achieved some modicum of success, at least by my own metric (and as an Indie, that's the one that matters.) It's written honestly and sometimes tongue in cheek.

I write. A lot. I still have a day job. I still get super excited when a stranger tells me that they read my book. I make a few bucks selling books—but I also get to meet lots of interesting people. Hopefully your journey gets to be the same—or even better.