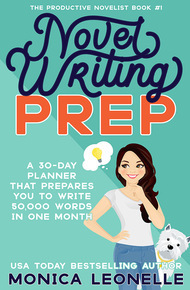 Monica Leonelle is a USA Today bestselling author best known for her book publishing and business expertise at TheWorldNeedsYourPassion.com. Her nonfiction series, The Productive Novelist, has sold over 60,000 copies and helped thousands of writers write faster, become better storytellers, and find their way to success.

Monica has been independently publishing since 2009 and has written 40+ books across fiction and nonfiction (encompassing three pen names). Before becoming an independent author, she led digital marketing efforts at Inc. 100 companies like Hansen's Natural and Braintree.

For creative fiction writers who are writing their next novel, Novel Writing Prep by USAT bestselling author Monica Leonelle takes you step-by-step through planning your novel over the course of 30 days.

You may be wondering, is it possible to write 50,000 words in 30 days without it being a crap draft? Yes! You can write 50,000 good words on your novel in as little as a month, as long as you prepare yourself. After helping thousands of authors develop the skills to hit huge word counts in a short period of time, I've found one thing in common across all authors, at all skill levels, from those who have never written a novel to those who publish professionally… This one thing not only helps writers get their book to make sense (and read well!) on paper, but also helps them write it faster in the first place… And it's simple: You must know what you are going to write before you write it. That's it!

The results? Most writers can at least double their writing speed (some can triple it), meaning they can do twice as many words in the same time period as they were doing before. Additionally, these writers encounter fewer bouts of writer's block and are more likely to see their book in print down the line.

Novel Writing Prep takes you through a simple, flexible, easy-to-implement outlining process that will give you a skeleton of ideas for completing a marathon writing month. And best of all—you can go through all 30 planning prompts in just a few minutes a day over 30 days, or you can complete a pizza-and-netflix-and-writing binge over a weekend. Doesn't matter your skill level, your writing experience, or how you prefer to write a first draft. For plotters, pantsers, newbies, veterans, and everyone in between—let Novel Writing Prep help you plan your novel before writing it, so you can write an awesome book faster.

A lot of stories start with an idea — but usually, there's not enough there to begin writing a story.

Today we're going from idea to concept. Here are a few examples of ideas that eventually became stories in our modern culture:

All of these ideas are extremely popular stories in today's culture, and two of them have spawned multiple franchises. What does this mean? Is there value in an idea alone if it can spawn multiple huge franchises, none of which are infringing on another's copyright?

"A concept is an idea that has been evolved to the point where a story becomes possible. A concept becomes a platform, a stage, upon which a story may unfold. A concept, it could be said — and it should be viewed this way — is something that asks a question. The answer to the question is your story."

Brooks describes a concept as something that launches a series or franchise. For example, what's a show about a group of friends in their 20s-30s living in New York City (the idea)?

If you said Friends, you're right. But if you said How I Met Your Mother, you're also right. What about Girls? Seinfeld? Sex and the City? Gossip Girl? Baby Daddy? Don't Trust the B — — in Apartment 23? Each of these series is the same in idea, but slightly different in concept.

The Difference is the "What If?" Part

What if a woman leaves her fiancé at the altar and seeks solace in her high school best friend, whom she hasn't spoken to in years? (Friends)

What if a man tells his kids about how he met their mother, but starts the story long before he even meets her to explain why she was perfect for him? (How I Met Your Mother)

What if a girl moves to New York City to be a "Carrie Bradshaw" type of writer, and finds out that it's nowhere close to the Sex and the City dreams she aspired to? (Girls)

We've now gone from the same idea to three unique concepts. Each of these is a "twist" on an old idea.

How Can You Take Your Idea and Turn It Into a Concept?

Almost all concepts are a twist on genre tropes and conventions. This is possible without infringing on copyright because the answer to "what if?" is different each time.

For example, what's a television show about two male vampires who fall in love with the same human girl?

Go back to the "What if?" question:

What if the two male vampires are close, and one sired the other? What if one ranks higher in that the other in vampire politics, and has ordered the lower-ranked one to start a relationship with the human in order to spy on her? (The Southern Vampire Mysteries and True Blood franchise)

What if the two male vampires were estranged brothers? What if the human girl looked just like the woman who originally tore the brothers apart? What if all three were teenagers living in the same town? (The Vampire Diaries novels and television show)

In fact, if you wanted to broaden this idea, you would find many movies, books, television shows, and more that are basically a supernatural love triangle. Twilight, for example, fits this idea as well, except one of the males is a werewolf.

Keep drilling down on the question "What if?" to get to the root of what makes your story different (but similar) to what's already out there in your genre.

The Three Critical Ingredients To Include in Your Concept

A concept isn't specific and usually doesn't "name names" or provide detail on the characters, the setting, or anything else. It may hint at those things, and it will certainly hint at conflict. But for the most part, it's a marketing piece that sums up the most basic design of the story.

In scriptwriting, it might be called a log line or a pitch. At a writer's conference, it might be the sentence you say when someone asks you what your book is about.

It is different from an idea because it's much more detailed, usually highlighting a few different elements:

The opposition (not necessarily the antagonist, but an opposing force)

How To Turn an Idea Into a Concept

We don't need to think much about an idea or even define it fully; we just need to recognize that it is not a concept. If we can do that, then we can take an idea and hone it into more!

Moving beyond an idea, the concept is the hook of your story. It can usually be phrased as a "What if?" question, and it often points to a theme and/or conflict for the story. For example:

(What if) 24 impoverished teenagers battle to be the lone survivor of the yearly Hunger Games, ensuring their status and wealth for the rest of their lives. (The Hunger Games)

(What if) A teenage girl falls in love with a vampire who wants to kill her anytime he catches a whiff of her blood. (Twilight)

Look for ideas that translate to concepts and vice-versa. Again, this is really easy to do in television and movies.

You probably know books in your own genre that are similar to yours, so knowing how to distinguish them in concept will help set your work apart.