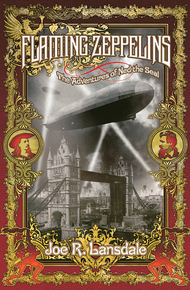 Joe R. Lansdale is the author of more than thirty novels, including the Edgar Award–winning Hap and Leonard mystery series (Mucho Mojo, Two Bear Mambo) and the New York Times Notable Book The Bottoms. More than two hundred of his stories have appeared in such outlets as Tales From the Crypt and Pulphouse, and his work has been adapted for The Twilight Zone and Masters of Horror. Lansdale has written several graphic novels, including Batman and Fantastic Four. He is a tenth-degree black belt and the founder of the Shen Chuan martial art.

What do the disembodied head of Buffalo Bill Cody, Annie Oakley, Frankenstein, the Tin Man, Captain Nemo, the Flying Dutchman, and the inestimable Ned the Seal have in common? Find out as they embark upon a spectacular set of nonstop steampunk adventures. For the first time, two epic chronicles, Zeppelins West and Flaming London, inscribed by a courageous young seal on his trusty notepad, are collected together in one volume.

Leap from a flaming zeppelin with the stars of the Wild West Show in a desperate escape from an imperial Japanese enclave. Wash up upon the island of Doctor Moreau, in mortal danger from his unnatural experiments (and ignorant that Dracula approaches by sea). Unite with Jules Verne, Passpartout, and Mark Twain on a desperate voyage to the burning streets of London, which are infested with killer squid from outer space courtesy of H. G. Wells's time machine.

It's a raucous steam-powered locomotive of shoot-'em-up Westerns, dime novels, comic books, and pulp fiction, as only Lansdale, the high-priest of Texan weirdness, could tell.

•Take a traditional Western story and mix in zombies or aliens or creeping Gothic dread. Take a classic pulp adventure set in a jungle or lost city or aboard a ship and add all measures of strangeness and madness. What you get is both fresh and tried-and-true, a style of storytelling that enlivens beloved fiction tropes with wild possibilities, expanding the boundaries of the form. These kinds of tales are among those that Joe R. Lansdale writes best (though no genre, sub-genre, or style is beyond his prodigious capabilities). Thanks to him, we have this trilogy of books narrated by a seal named Ned (yes, you read that right), a three-pack of novels that unleash all manner of oddities in the realms of pulp storytelling. How can you not love books in which Annie Oakley co-stars with Captain Nemo and the disembodied head of Buffalo Bill Cody? In which dinosaurs, zeppelins, aliens, time-travel, the Golden Fleece, and a lost land at the center of the world all play important roles? Though Joe's Hap and Leonard books and stories have gotten the glory and been translated into a television series, I say his Ned the Seal trilogy is by far the most imaginative and entertaining creation to spring from his fevered mind…the very definition of weird pulp fiction and weird Western, two long-lived sub-genres that can and should be unleashed on the reading public with much greater frequency. – Robert Jeschonek

When the zeppelin hit the stormy sea the hot furnace exploded. Flames danced on the water, then hissed out, leaving boiling white smoke, charred lumber and stinking rubber in its wake. Waves crunched the decks and cabins, wadded up what was left of the helium-filled tubing as if it were onion skin paper. The rain cried on the remains. Lightning slashed yellow sabre cuts across the sky.

The corpses of the boiler room workers, par-boiled, popped to the top, bobbed on the waves like corks. Floating with them was the jar containing Cody's head. He was cursing violently, calling for Goober.

The waves shoved Cody up, dropped him in a trough of foaming water; he saw the corpse of Goober float by face down. Then the whitecaps turned his jar and tossed him; water ran down the speaking tube, joined the mixture inside his container. Cody licked at the water. Salty, of course. But it did kind of neutralize the pig urine.

For once, Cody was glad he didn't have a stomach; all he could feel was a kind of dizziness.

Nearby, clinging to planks, were Hickok, Annie and Bull. Cetshwayo and Frankenstein's monster were nowhere to be seen.

There were oil-fueled flames burning on the water. In the light they provided, Hickok, clasping his plank, saw the others. The dead boiler room workers, Goober popping about, Annie and Bull clinging to a plank together, and finally, the head of Cody, surfing the waves in his sturdy Mason jar.

Hickok paddled over to Bull and Annie, pulled his bowie knife from its scabbard, stuck it in his plank, said, "Bull, we got to get hold of Cody, then find a way to lash some of this junk together."

Hickok swam to Cody's jar, grabbed it, swam it over to Annie. Then he and Bull set about building a raft. It was tedious, but by dog paddling about, grabbing planks and cutting strips of floating rubber, they were able to fasten a half-dozen pieces of wood together.

By the time they finished jerry-rigging a raft, got Annie and Cody loaded on it, they were exhausted; the sun was burning through the haze, the rain was dying out, and the ocean was beginning to settle. Then the sharks came.

Hickok said, "No rest for the wicked, and the good don't need any."

Unconsciously, Hickok reached for his guns. But his sash was empty. They had been lost. He had even lost the bowie knife.

There were about a dozen of the beady-eyed bastards circling the makeshift craft. One of them came near, rolled on its side, showed its dark dead eyes. It opened its mouth to reveal a hunk of dark flesh dangling from its teeth. Part of an arm actually. They recognized it. It belonged to Cetshwayo.

"That not good," Bull said.

Cody, in his jar, was singing drinking songs.

"It's the salt-water in the jar, mixed with his chemicals," Annie said. "And he could use a crank."

Cody went silent for a moment. Hickok held the jar in his lap, tilting it so he could look down into Cody's face.

"It's all right, pard. Or as good as it could be under the circumstances." Hickok turned the jar so Cody could see the contents of the raft. "We're the only survivors."

Hickok placed Cody in the center of the raft, leaned back, waited for it to get hot and unbearable. He thought of food briefly, thought of water longer, then the flames on the water died and the sun rose high and hot and their flesh began to burn. The water in Cody's jar began to bubble.