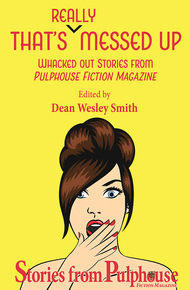 A crazy collection of twisted stories in the tradition of Pulphouse Fiction Magazine, from the editor of Pulphouse, Dean Wesley Smith.

Head-shaking stories such as the one about a cop with a rose for a head in search of the evil murderer The Pruner. Or the one about sentient boogers, or the tale of those pesky Martians…

A truly hilarious batch of stories from some of the best writers working today.

"Resolutions 'R Us" by Annie Reed
"The Birth of Booger Nation" by David H. Hendrickson
"A Menagerie of Messed Up Shorts" by Mark Leslie
"Sniff the Source" by Stephannie Tallent
"In which Dean Wesley Smith Is Forced to Buy a Story about a Queen for Pulphouse Magazine" by Brigid Collins
"Fatal Plot Device" by Kelly Washington
"Goddamn Martians" by Ezekiel James Boston
"Killing Confucius" by Tina Back
"Bodacious Billy and the Bazooms of Droom" by Jason A. Adams
"Why the Cop with a Rose for a Head Wears a Rose-Head Mask" by Robert Jeschonek

•Though classic weird fiction has more to do with unexplained disorientation, shifting reality, and creeping dread, there is a place for off-the-wall humor and twisted oddness in the genre, as well. To cover this particular world of weird fiction, the prolific author/editor Dean Wesley Smith brings us a collection of stories featured in the current incarnation of Pulphouse Fiction Magazine, each featuring a different spin on the strange and twisted. From talking dogs to solicitous Martians to sentient boogers, the tales in this set explore a range of very weird themes, settings, and characters—one of them being Dean Wesley Smith himself in a very meta story about a clever author who's determined to make him break his own golden rule. It's all capped off by a surreal fantasy about a world where the inhabitants have flowers for heads, and dark forces are unleashed during one rose-headed cop's bizarre murder investigation. Stories like these might make us feel uneasy in one way or another, tweaking our mores, worldviews, and tastes…a quality that's prized in the wider universe of weird fiction and its many sub-genre offshoots, as well. – Robert Jeschonek

Pulphouse Fiction Magazine is known for its twisted stories. And its high-quality fiction across all genres. That is a combination most stories don't reach. They can be quality stories, but just not have that Pulphouse twisted feel to them.

It was one fine winter day that I issued a challenge to about fifty professional fiction writers to write me a short story that would not only fit the Pulphouse style and be of high quality, but be even more twisted than normal. My goal was to fill this book titled That's Really Messed Up.

To be honest, I didn't think I would get enough stories, but amazingly I did. I guess I should have trusted the ability of fiction writers to just let go and have fun.

I knew I just might be able to find enough stories when I first read a story by bestselling and award-winning writer David. H. Hendrickson. Boogers becoming sentient. That's right, and he makes it work as a story. Now that's messed up.

Then, professional writer Brigid Collins made fun of me by name in a story, something anyone of lesser talent would never dare do. She took on my known dislike for stories with queens and castles and elves and such. And she made it work as a story. Okay, that's really messed up.

And funny. At least to me, which Brigid was very grateful.

Then Ezekiel James Boston, a professional writer known for his lack of fear, started off a story with the first line "In space, no one can hear you orgasm." And then he went from there about Martians and so much more. Really, really messed up.

And all the way through this book it's like that. Head-shaking stories that will keep you reading all the way to the last story where professional writer Robert Jeschonek tells a story about a cop with a rose for a head in search of the evil murderer The Pruner.

Yup, beyond really messed up.

So I hope you enjoy this crazy collection. I can tell you it was great fun putting this together and being amazed at how writers can just constantly surprise me.