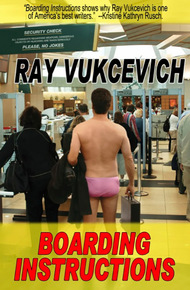 Ray Vukcevich lives and writes in Oregon. He spent many years as a research assistant in several university brain labs but is now writing full time. His books include this collection, several novels, and many short stories.

Ray Vukcevich's collection includes 33 previously uncollected stories, all with his trademark whimsical skewed look at the world around us. It's a world seemingly not our own, and yet if we look hard enough we'll find that world just out of sight around the corner. A world of hidden stairs, funny smells, vampire girlfriends, fire women, missile boys, secret libraries, and impractical (and yet frighteningly real) airline procedures. Wonderfully inventive and wildly unpredictable, these stories are sure to entertain you and keep you wondering: "Are we there yet?"

•To me, finding an author whose work is difficult to categorize is a great thing. Ray Vukcevich is the poster child for such authors, and his writing, as exemplified in this collection of stories, is stunning. I can truly say, when you start a Vukcevich story, you have no way of knowing where it will take you—and aren't those the kind of stories we all remember and treasure the most? In this book alone, you will find a character with fatal breath, a race of alien fire women, girlfriends who happen to be vampires, and a story told in the form of a grocery list. In all 33 of the stories in this volume, it's very clear that reality isn't quite what we expect it to be, and things can fly spectacularly out of control at any moment. Magic sometimes plays a role, and the unexpected is coming to have its way with us. We have the uneasy sense that things are changing in ways we don't fully understand, and the weirdest circumstances we can imagine are just a starting point for the actual events that will overtake us. In other words, the stories in this book represent the key tenets of weird fiction at is finest, and Vukcevich is a masterful navigator of its darkest, strangest currents. – Robert Jeschonek

My Eyes, Your Ears

I don't know if I've told you this story before, because you all have black bars over your eyes, and I cannot tell who you are. I can see one of you is a police officer. I don't know whose blood this is we're standing in. Please, God, don't let it be Caroline's.

I realize now the trick I pulled on Caroline back in high school was a desperate attempt to get her attention. She was so perfect, so strawberry blond, so well-dressed and groomed. You could signal a rescue helicopter by bouncing sunlight off her teeth. She was just so totally Barbie it made you want to grab and squeeze her to see if she'd squeak. Her mother drove her to school. The bumper sticker on her mother's car said, "My Child is a National Honor Society Student."

I replaced it with one that was almost identical but said, "My Child Has Enormous Ears."

And then people were honking and grinning and children were giving her the Dumbo ears with their hands up along the sides of their heads, and Caroline and her mother were thinking they'd made some horrible social blunder like coming out in favor of atheism or something, but then one day Caroline spotted the bumper sticker, and you could hear her outraged cry all the way down the block and across the street, and that would have been the big payoff of my prank, if it had really been a prank an not an adolescent attempt to get her to notice me.

It didn't take her long to figure out I'd done it. I'd made no effort to cover my tracks. What's the fun of a practical joke if no one knows you did it? But after a couple of fits of yelling and shaking her fists at the sky and kicking the bumper of her mother's car, she went all good-sport on me. She accepted my apology, and I scraped off the bumper sticker. Incredibly, she started smiling at me in the high school hallways. One thing led to another, and she went to the senior prom with me. We fooled around a little, but not too much, in the back seat of my car. I almost asked her to marry me. I couldn't think of how to put it. I considered a bumper sticker that said, "Marry me, Caroline!" But the moment passed in silence.

I got into a pretty good college, and she went off to an even better one, and I figured that was that. I would drink tequila and read the Beat poets. Sadder, wiser, world-weary, maybe I'd grow a mustache, but then one day, she was back and asking me out for tea. For tea? Yes, tea, you know tea, in a teahouse, with little cakes, oh, I suppose you could have coffee. No, tea is fine. It's wonderful to see you again, Caroline. Oh look over there, she said, and I looked, and she put something in my tea. I didn't see her do it. She told me about it a little later, because what fun is a practical joke if no one knows you did it?

She had let her hair grow big around her ears, no more perky ponytails. Nice hair, I said. You mean, thank god you can't see my huge, ugly ears, she said.

There is nothing whatever wrong with your ears, Caroline. I love your ears, I said. You're just saying that, she said. Jesus, I had given her some kind of complex about her ears all those years ago with the bumper sticker.

Always the jokes. She turned her head away and then turned back, and I saw there was a black bar over her eyes. She was a photograph of someone you shouldn't know about. All of the people in the teahouse had black bars over their eyes.

I see you're getting it, she said, and the kicker is it's retroactive!

And it is so true! I have always seen a black bar over the eyes of everyone! It hasn't been easy. I am not so much blind as unrecognizing. Nevertheless, I have always loved Caroline's ears. She has nothing to hide when it comes to her ears.

Oddly, I also see black bars over the eyes of domesticated animals. Dogs and cats, cows and horses. Ferrets. No mice. What would be the point? Whoever worried about an unidentified mouse?

A server approaches. I don't know if I've ever seen him before because of the black bar over his eyes. You should assume the crash position, he tells us. It's going to be tricky, but our captain thinks she can set this teahouse down with not so many casualties.

Later in the smoke and shouting and running on the tarmac, I lose track of Caroline. No, no, I tell the rescue helicopter, I've got to find Caroline. Is that you? Is that you? I can see that might be you, because you are a woman of a certain width and depth and height, and your hair has red highlights that are subtly reflected an octave higher in your fingernails and an octave lower in your toenails. Nice knees. If you were Caroline, I could see you wearing that frilly white top, that pale green skirt, those brown sandals, that green glass bracelet on your left wrist.

Why does there always have to be shooting?

I suddenly see that I'm standing in someone's blood, and then the policeman drags me away for interrogation. Did you see whose blood I was standing in? Was it a woman of a certain width and depth and height? I'll ask the questions, he says. Actually her width and depth vary as you move your eyes up and down her height which is generally consistent.

He wants to know about the shooting. We are Americans, I tell him, and for us, after 9/11, everything is about shooting and screaming and standing in blood, even when it's not. We do not appreciate that kind of talk at a facility like this, he tells me. He pushes me down onto a hard wooden chair.

A woman runs up and shoulders the policeman aside and drops down on her knees in front of me. Caroline, is that you? It's okay, she says, I'm here. How can I know that's you? She leans in and flips her hair away from the side of her face, and I see her left ear in extreme close-up. She turns quickly and shows me the other one. Her ears are beautiful pink seashells in the sunshine. They fill my world with joy. They really are, I feel compelled to report, enormous.