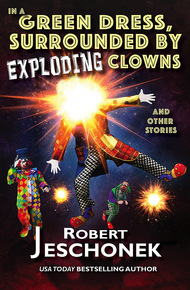 In a Green Dress, Surrounded by Exploding Clowns by Robert Jeschonek

Get ready to have your mind blown. Each of the 15 weird scifi and fantasy stories in this collection shines a light on another wild world you've never seen before. From exploding clowns to killer chickens and relentless land sharks, you will meet the wildest characters…and find a bold new way of looking at life. Forget boring books about the same old star fights. Surf the new wave of tomorrow and leave the same old same old far behind. Includes 15 stories from the cutting edge of weird fiction:

•"In A Green Dress, Surrounded by Exploding Clowns"
•"Monkey Sea, Monkey Do"
•"The First Hollywood Cowboy of the Bropocalypse"
•"In All Your Sparkling Raiment Soar"
•"Piggyback"
•"Fuzzy Duck"
•"Not-So-Fortunate Son"
•"Blackbeard's Aliens"
•"Cock-A-Doodle Die"
•"The Dancing Dead"
•"The Bear in the Cable-Knit Sweater"
•"The Breakout Story of Galaxy's Edge Ten Million"
•"The Little Robot's Bedtime Prayer"
•"The Spinach Can's Son"
•"As If My Every Word Has Turned to Glass"

•By its very nature, speculative fiction, which encompasses the genres of science fiction and fantasy, tends to feature offbeat and unexpected characters, settings, and ideas. Some might say the terms "weird science fiction" or "weird fantasy" are redundant, even…but it's true that some scifi and fantasy stories are weirder than others. A series about space marines waging war against implacable alien enemies in a distant galaxy? Usually not so weird, for the most part. Stories about a killer sentient chicken hunting pesky tiny humans or an explorer of an extra-dimensional realm called the Underfunnies where the flip side of newspaper comic strips comes to terrifying life? In cases like those, "weird" is definitely the word that comes to mind. Those are the kind of stories you'll find in this collection—tales in the proud tradition of weird scifi and fantasy. It's a sub-genre that can be mind-bending, breathtaking, and fun all at once. Such stories, at their best, push you out of your comfort zone and challenge you to imagine the limits of human possibilities. They make you believe in a sea monkey creature trapped in a dying oasis at the end of the world, a robot who worships his owner as a god, and a guy victimized by rampant social media who ends up stuck in a green dress with clowns exploding all around him. – Robert Jeschonek

From "Piggyback" in In a Green Dress, Surrounded by Exploding Clowns and Other Stories

This story isn't for you.

The creature I'm riding staggers and clutches his left arm. He cries out, and I nearly cry out along with him.

He doesn't know that this is my last chance.

The creature, an overweight middle-aged human with shaggy dark hair, is called Calvin Garland. He's homeless, and he's drunk, and he's having a heart attack in a New York City alley.

Not that he even knows that I'm here, wrapped around his shoulders like a slimy green mink stole. Not that he or any other human is aware of me...though occasionally, when I want him to, he can hear me, just a little. And sometimes, he catches a glimpse of me out of the corner of his eye, just for an instant.

It's happened to you, too, hasn't it? Haven't you ever thought there might be a good reason for that?

Calvin falls against an alley wall, clutching his chest. At the same exact moment, I wrap a green tentacle around him and clamp its fanged red sucker into the flesh over his heart.

I pump a stream of syrup into his heart and follow that with electric shocks. The whole time, my hundred scarlet eyes are looking for any sign of The Viscera in the sky.

If The Viscera is watching, and Calvin drops dead, I'll be swept from his body and subjected to torments you can't even imagine. I'll spend the next thousand years shrieking and howling in agony at the hands of creatures who can see, touch, and torture me just fine.

None of this will happen merely because I lost a host. It will happen because I failed to drive a host to save the planet from the greatest threat it has ever faced.

"You don't want to die," I whisper in Calvin's ear from my fluttering, ooze-coated lips.

His heart returns to normal, for the moment at least. Maybe if he'd taken better care of himself all those years...but he was living rough even before he moved to the streets.

I curl another tentacle around his head, plant a sucker between his eyes, and pump in a different syrup to take the edge off. He won't do me much good if he's too freaked out to walk and talk and fire a gun.

Then, suddenly, the temperature drops twenty degrees, and the sun turns to shadow. My circulatory organs pound, and my slime turns to ice, because I know.

The Viscera is here.

All my eyes turn upward. There it is, hanging over the tallest towers, filling the sky—too massive to take in all at once.

Yet not a single human can see that vast mass of squirming tentacles and pulsating ebony flesh. No human-built instrument can detect the flickering strobes of its sensory organs or the excrement dripping from its orifices.

And no human mind can comprehend the intentions of its ancient, implacable intellect. Not one of you can fathom the extremes that it will go to when dealing with its Yoke servants, like me.

But I can. And that is why I quake as it passes. That is why I do everything I can to stay unnoticed and unpunished.

Though I know, as every Yoke does, that The Viscera misses nothing. It is our God, just as it is yours.

Even though you don't know it yet.