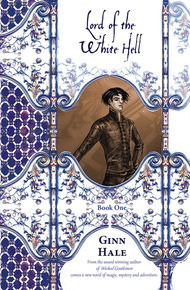 Winner of the Spectrum Award, Finalist for the Lambda Literary Award

Award-winning author Ginn Hale lives in the Pacific Northwest with her lovely wife and their ancient, evil cat. She spends the rainy days admiring local fungi. The stormy nights, she spends writing science-fiction and fantasy stories featuring LGBT protagonists. (Attempts to convince the cat to be less evil have been largely abandoned.)

Lord of the White Hell by Ginn Hale

Kiram Kir-Zaki may be considered a mechanist prodigy among his own people, but when he becomes the first Haldiim ever admitted to the prestigious Sagrada Academy, he is thrown into a world where power, superstition and swordplay outweigh even the most scholarly of achievements. But when the intimidation from his Cadeleonian classmates turns bloody, Kiram unexpectedly finds himself befriended by Javier Tornesal, the leader of a group of cardsharps, duelists and lotharios who call themselves Hellions. However Javier is a dangerous friend to have. Wielder of the White Hell and sole heir of a dukedom, he is surrounded by rumors of forbidden seductions, murder and damnation. His enemies are many and any one of his secrets could not only end his life but Kiram's as well.

A clash of cultures leads to both danger and romance in this fascinating story of the first Haldiim to be admitted to the Sagrada Academy. – Catherine Lundoff and Melissa Scott

Kiram woke as the carriage jolted against the rough cobblestones of the country road.After six days of sleepless travel he couldn't believe that he had dozed off today of all days. He frowned at the creased front of his white linen shirt and tucked a loose edge back into his dark pants. His curly blonde hair was always a wild mess after he had slept on it. He tried to smooth it with his hand, feeling the tight spirals spring back as his fingers brushed over them.

His book, Modern Mechanism, lay on the carriage floor. Dozens of strips of paper protruded from between the pages, displaying Kiram's notes and diagrams. He retrieved the book, straightened his notes, and carefully wrapped the book in the remains of his parchment and tucked it into the wide pocket of his new Cadeleonian wool coat.

Kiram had packed very little clothing and only a few of his favorite books. Tools and crated machine parts filled most of the space in the carriage. Many heavier crates groaned against the ropes securing them to the roof of the carriage. The driver had charged Kiram's mother twice the normal fare because of the weight, but she had been proud to pay it. Those heavy, oily pieces of metal had won Kiram the right to attend Academy Sagrada.

No full-blooded Haldiim had ever before been accepted into the school, and a century had passed since the half-blood Yassin Lif-Harun studied there.

Lif-Harun's formulas had altered the very heavens. A statue of the man stood in the Royal Park. Kiram's father had already pointed out the spot where he thought Kiram's own statue would one day stand. If his parents had been allowed to, they would have sent another half-dozen carriages filled with praise dancers and red-dyed doves to announce their youngest son's arrival. Fortunately the school permitted only one carriage per student.

The carriage struck another bump and Kiram shoved the stack of rocking crates back against the carriage wall. Sunlight streamed in through the red carriage curtains, filling the space with a warm glow. The dark wood radiated a late afternoon heat. The brown coat he'd worn for the trip over the mountains felt sweltering hot now and smelled of his sweat. Kiram stripped it off and stretched his long legs as best he could in the cramped confines.

He couldn't be far from the Academy Sagrada now. Maybe an hour, possibly less.

He pulled the curtains aside and gazed out at the walls of wild, green forest that arched over the road. There was a flash of brilliant blue wings as a flock of jays took flight from the overhanging branches. He thought he caught a glimpse of something white moving fast between the trunks of trees but he lost sight of it as the road turned away.

As he rode further, the dense brambles and towering oak trees gave way to groomed hedges and open fields divided by low stone walls. A flock of white ducks waddled along the roadside, tended by a young, bored-looking boy.

Far across a fallow field, Kiram spied a horse and rider. The horse was brilliant white in the bright sun and rider's skin seemed almost as pale as the horse's hide. His black hair stood out in sharp contrast, as did his deep blue Academy Sagrada uniform.

Kiram doubted that his own uniform, well made as it was, would look so good on him. He wondered if the rider was an upperclassman or even an instructor. Kiram stared in amazement as the lean man urged his horse ahead and the two of them seemed to fly over the stone wall then raced across the road and through the opposite field.

He didn't spare a glance for Kiram's carriage, the herder boy, or even the flock of now startled ducks. A few moments later both the horse and rider were little more than a distant haze. Kiram tried to keep track of the rider's blue jacket, but eventually he lost sight of it amongst the fields of blooming sunflowers.

Kiram felt his pulse surging through his body. This was exactly what the academy promised for his future, such fearless prowess, such determination and beauty. Perhaps even adventure.

Kiram had been patient for days but suddenly he felt as though this slow, creaking carriage would never reach its destination and he needed to be at the academy now. Desire and excitement coursed through him like a physical pang.

As the carriage rolled up to the heavy stone walls that surrounded the academy, Kiram gripped the latch of the carriage door. He hardly took in the fortress-like towers of the main building or the chapel's brilliant blue spire. He stared at cobblestone paths and green lawn of the grounds, searching for his fellow classmates. Several boys dressed in academy blue strolled toward the chapel, but none of them captured Kiram's attention the way that single rider had.

The carriage jerked to a halt, and Kiram slipped slightly forward, his hand pulling the door latch. Instantly the carriage door sprang open and he spilled out onto the muddy ground in front of the stable. He struggled up to his feet to see two older men in gray scholars' robes gaping at him. Just behind them, leading his brilliant white horse by its reins, stood the rider.

"I'm fine!" Kiram announced, though no one had asked. "I just…the door opened and I wasn't looking…"

Kiram could feel his face flushing bright red. Not even his dark skin could hide such an intense blush. He regained his feet quickly but to his horror the rider's expression shifted from slight concern to amusement. His handsome smile somehow made Kiram's humiliation far worse. He glared at the rider and then dove back into the cover of the carriage to retrieve his coat.

When he turned back the rider had disappeared into the stables.