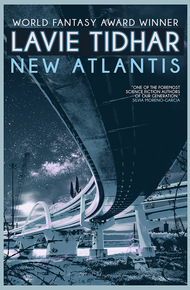 When a mysterious message arrives from vanished New Atlantis, a restless Mai undertakes the perilous journey to its drowned isles. But the journey is long and hard: through the Blasted Plains and the ancient cities of Tyr and Suf, through shipwreck and wilderness.

For this is a world where ants develop inexplicable weapons, where a lonely robot lives surrounded by cats in the ruins of old Paris, and where floating coral islands host sleeping sentience. Mai's journey takes her by land, sea and air to the islands of New Atlantis, and to the nightmare prison buried underneath old London.

On her way she will find heartbreak and love – and a new life, awakening.

I was fortunate enough to spend a little time on a writing retreat in Korea, and was inspired by its founder, the famous Korean author Pak Kyongni. I was searching for a new world of science fiction, something far from Central Station's Golden Age, and so I began writing the stories about Mai and the Land, of which this novella is the longest. I hope I can go back to the Land some day soon. – Lavie Tidhar

Outside, the skies darken. The male nightjars' voices rise and fall in their churring songs, and they blend harmoniously with the chirps of the field crickets. My daughter's children and their friends run laughing on the paths. I long to join them.

It is Chuseok, the festival of the harvest moon. I can smell jasmine, lilac, and the deep, rich scent of the small pink flowers of the Arbre de Judée tree which grows outside my window, and which I planted there as a little girl with my mother, long ago.

My name is Mai. I have lived on this Land for eighty-four years and I love it, deeply. I was born here, and it was here that I learned to write: which is to say, to attempt to give shape to the world. And so it is here that I write this, the chronicle of a life spent under the broken moon, of a life spent on this Land, from which we all come and to which we all return, but for those few of us who once tried to go to the stars.

This festival, like all our celebrations, is a mélange. When the earth shook and the seas rose and the sky was rent and the moon broke, the survivors of our species came from all corners, by paths both perilous and desperate to this place. I could give you the old names of things, but I can tell you where it is by what it grows: pines and weeping boletes, wild thyme and wood sorrels, dandelions, jasmine…

I wish to go and join them, but the days grow short and the nights long, and I write this in the light of a lantern adapted from an old mortar shell, the sides cut out and fitted with old glass that was itself salvaged. My mother was a salvager, journeying each autumn, after the harvest moon, along the old roads where the vehicles of the ancients rusted in their millions, and on to the ancient ruined cities, where only salvage and junk and a few old machines, still alive, remained. Each year, I would hold my father's hand and watch her go. The salvagers departed for months at a time and returned in spring, bringing back with them all that was still usable. I longed to go with her, and to see the ocean, and to smell the salt in the air and see not just Land, but Sea. And one year I did that, too, and one year she disappeared, and I searched for her… But that is another story, for another time. I never became a salvager, it was not in me; but I did become, in lieu, a chronicler of sorts.

But I digress. My daughter calls me to come out. I do not want to miss the lanterns. Later, we'll eat baked flatbread, olives, winter kimchee, watermelons. We'll drink young, red wine. The flowers bloom. My father told me, Never pick a flower. Let them grow where they are. We keep the plants, and, in our clumsy way, we try not to trespass upon the planet.

So hush. This happened long ago, in my third decade on the Land.

A message came, one day, from the place we now call the New Atlantis, where the seven sacred islands lie…

I reluctantly went on a long, hard journey. I encountered loss, and I found love. I saw the sun harvest in Suf and the fabled floating Isles of the Nesoi, and I suffered shipwreck. I met the mad robot, Bill, and I saw the ruins of La Ville Lumière. I visited Atlantis.

Then I came back.

That is the story.

Everything else, as the old poet once said, is just details.