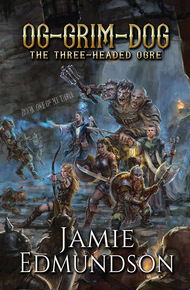 Jamie has always loved a good story, whether real or imagined. He grew up in the south of England before moving to the north, where he worked as a history teacher. He still lives there with his wonderful family, but now spends his time writing, mainly about people hitting each other with swords.

You can connect with him at his website, jamieedmundson.com

Two heads are better than one. Three can be a real pain in the arse.

Everyone knows ogres can't be heroes. But Og-Grim-Dog is no ordinary ogre.

Recruited by a team of eccentric dungeon crawlers, all three heads are determined to prove their worth. Will their new crewmates accept them? Will the pencil pushers at the Bureau of Dungeoneering be able to stop them? Will Gal'azu become a more tolerant society...and will Og-Grim-Dog solve the dark mystery that drew them into this new world in the first place?

Are you Og-Grim-Dog, the three-headed ogre?' asked the goblin.

'D'ya see any other three-headed ogres round here?' asked Dog, rather impolitely.

Grim sighed. There was no need to be rude, and sarcasm was wasted on goblins. It was now looking around the cavern for other three-headed ogres. Dog barked with laughter at the creature's confusion.

But there was no-one else in the cavern, and barely any furniture. A wooden chest stood against one wall, a weapons rack on another. In one corner was the ogre's pile of bones.

The goblin grinned, pleased that Grim knew his name.

'I bring a message from—'

'Wait. Wait a moment,' interrupted Dog. 'Your name is Gary? Why, by the twenty-three circles of fiery Gehenna, is your name Gary?'

Grim felt Og wake from his snooze next to him.

'Persecuting him? I'm not persecuting him, I'm just asking why he has changed his name. He had a perfectly good name. What was your name, son?' he asked the goblin.

'He's changed his name,' said Og, now fully awake and getting louder, 'because goblins are discriminated against! The system has forced him to take a human name. Don't blame the victim!'

'System? Victim? What the—'

This always happened when Og and Dog had an argument. They shouted at each other, but since Grim was the middle head, they actually both shouted at him. He was sure he was going deaf as a result.

'Gary says he has a message for us, so I think we should find out what it is.'

'The orcs want to see you. Immediately.'

'The orcs?' Dog asked, making a face. 'If the orcs want to see us, why don't they come ask us themselves?'

'Exactly!' said Og, as if he had just won their argument.

Og-Grim-Dog followed Gary out of their cavern and up the gently rising stone path that linked their home to the rest of Darkspike Dungeon.

Most of this part of the dungeon had been formed naturally: the stone walls were rough and untreated, the ceilings damp with water, so that there was a constant dripping noise, whether day or night. It was a lovely part of the world, and Og-Grim-Dog had made sure that no-one else was tempted to share it with them. Indeed, if you ignored the noise from the kobolds upstairs, it was a very peaceful place to live.

Up they went, to the next level of the dungeon. Here, things were more hectic. It was a densely populated area, full of orcs, goblins, and trolls, or 'green-skins' as Dog called them. Grim didn't use the term, since Og insisted it was racist. They did all have green skin, though.

Gary led them through the dimly lit corridors, past rooms full of goblin warriors, who peered out at them suspiciously. They negotiated the dungeon traps that had been set here and there to catch out unwary trespassers. The smell of blood came on the air: freshly slaughtered meat. Grim's mouth watered, and the ogre's stomachs rumbled.

They came upon a scene of violence and destruction. Doors had been smashed off hinges, splinters of wood everywhere. The clean-up operation had begun, but many orc bodies still lay sprawled where they had fallen. Elsewhere, ribbons of blood and guts, in shades of red and brown, glistened on the ground where bodies had been dragged away.

Amidst the carnage, hands on hips, stood Krim, the Orc Queen. Seeing Og-Grim-Dog, she waved them over.

'Thanks, goblin,' she said to Gary, giving him a little trinket before waving him away.

She cleared her throat noisily, and for some time, until an orc standard-bearer, flustered looking, rushed over to her side.

'Way to make me look stupid,' she said sourly. 'Get on with it, then.'

'Her Exalted Royal Majesty, Sovereign and Despot of the Black Orcs of Darkspike Dungeon, Overlord of the Orc Nation!' he declared in a powerful voice.

'Really, Krim?' asked Dog. 'What's with all this pompous flimflam?'

'It may be flimflam,' she conceded. 'But it is high time we learned a thing or two from the humans. They've been giving themselves ludicrous titles for centuries. And now their people just believe it all. And obey. Why shouldn't I do the same?'

'Why does everyone want to behave like the humans?' Dog demanded.

'Because they're winning,' said Krim. 'Look around you. Another attack—my soldiers slain, any treasures we had left taken. We orcs are done. There's not enough of us left to even give them a fight next time it happens. And that means they'll come after the rest of you. It's orcs who are dying right now, but don't think you'll be spared.'

'You've done it again!' Og shouted, into Grim's ear. 'Blaming the victims. That's twice in a matter of minutes!'

'But that's just it,' said Krim, mercifully cutting off another argument. 'There was nothing left to take. I haven't had enough fit and healthy warriors to go out raiding for months. The humans must have known that. They took all we had left the last time they attacked. They didn't come down here to win treasure. They came to kill us.'

'Hmm,' said Grim. 'Trespassing down here to find treasure we stole from them is one thing. But coming with the sole purpose of murder is quite another. But what should we do about it? More traps and stronger defences aren't doing the trick.'

'Someone needs to go up there,' said Krim. 'Find out what is going on, who's behind it, and why. I'd try myself, but I'm up to my neck in it here. Besides, the humans kill orcs on sight now. Quite frankly, it needs to be you. You're the only other person in this dungeon with the brains to do it.'

Ogres are stubborn, bull-headed creatures. Abduct their mother, threaten her with all kinds of torture and they'll offer to do it themselves, just so no one thinks they're a pushover.

But flattery. That works every time.