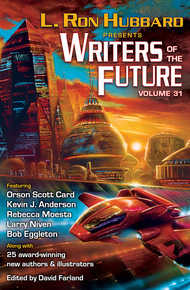 Writers of the Future: Volume 31 edited by David Farland

The future is here… Orson Scott Card, Kevin J. Anderson and Larry Niven have seen the future of science fiction and fantasy.

A constellation of the brightest lights in the science fiction and fantasy firmament have judged these authors to be the best, the brightest, the truest emerging stars in the field.

From alien invasion to alternate history, from cyberpunk to comic fantasy to post-apocalyptic worlds, these are the winning writers who have mastered every version and vision of sci-fi and fantasy.

Don't be left behind. Get a read on what's next.

"The Writers of the Future contest looks for people with the best imaginations who can see through the possibilities of the strangest and best ideas and tell stories that intrigue us and involve us." —Orson Scott Card

You'll love this collection from past and future science fiction masters, because these stories are hand-picked by some of your favorite authors—including Brandon Sanderson, Orson Scott Card, Nnedi Okorafor, and Robert J. Sawyer.

Thirteen Award-Winning Stories take you to places you've never been before:

To a future where a cop's performance depends upon the quality of his illegal brain-enhancing drugs.

To the home of Jack, who is troubled by a misbehaving pet Death God name Zu'ar.

To the planet Hesperidee, where one girl is on the brink of becoming something other than human.

To hop between doomed planets . . . and celebrate each one's apocalypse.

Mankind's sins must be forgiven, lest it be doomed.

The spirit in Abe's magical book makes big promises, but will only deliver at a tremendous cost.

The mobsters in Vinh Quang hope to purchase freedom for entire families—if they can just avoid the cops.

One young man's hallucination might be a ghost—or the key to survival.

A girl named Elizabeth is haunted by ghostly echoes from her past.

A person whose genetic upgrades let him speak only in five-word sentences.

The kids at Kessington House—a dorm for the psychomorphically unstable.

A writer gets to see what he could have created, if he'd only found the courage.

You think you have problems?

In the seaside resort of Summerland, a young artist struggles to complete a mural, and mend broken spirits.

Daniel's neighbors want your life—but only because they need it to get your soul.

Sam is trapped on a refinery in space and his fusion reactor is about to blow—and that's just the first of his problems.

It seems that our sun has just exploded.