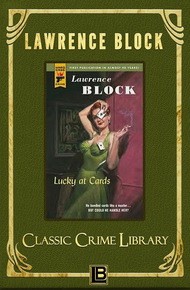 Lawrence Block is a Mystery Writers of America Grand Master. His work over the past half century has earned him multiple Edgar Allan Poe and Shamus awards, the U.K. Diamond Dagger for lifetime achievement, and recognition in Germany, France, Taiwan, and Japan. One of his earliest works of crime fiction, Lucky at Cards, has been getting comsiderable attention of late; his recent works include Dead Girl Blues, A Time to Scatter Stones, Keller's Fedora, and the forthcoming The Burglar Who Met Fredric Brown. In addition to novels and short fiction, he has written episodic television (Tilt!) and the Wong Kar-wai film, My Blueberry Nights.

Block wrote a fiction column in Writer's Digest for fourteen years, and has published several books for writers, including the classic Telling Lies for Fun & Profit and the updated and expanded Writing the Novel from Plot to Print to Pixel—and, most recently, A Writer Prepares, a memoir of his beginnings as a writer. He has lately found a new career as an anthologist (Collectibles, At Home in the Dark, In Sunlight or in Shadow) and recently spent a semester as writer-in-residence at South Carolina's Newberry College. He is a modest and humble fellow, although you would never guess as much from this biographical note.

Lucky at Cards by Lawrence Block

AT CARDS AND WITH WOMEN, BILL MAYNARD KNEW HOW TO CHEAT

On the mend after getting run out of Chicago, professional cardsharp Bill Maynard is hungry for some action – but not nearly as hungry as Joyce Rogers, the tantalizing wife of Bill's latest mark. Together they hatch an ingenious scheme to get rid of her husband. But in life as in poker, the other player sometimes has an ace up his sleeve…

Originally published under a pen name and another title, Lucky at Cards gives more than a hint of the powerful writer Lawrence Block would become. Fast-paced, hard-edged, and tough-minded, the book provides an insightful glimpse of a desperate world, and delivers a finish you won't see coming.

If it hadn't been for the dentist, I would have headed on out of town. The guy had a two-room office in the old medical building on the main drag, and I saw him Monday and Wednesday and Friday of the first week I spent in town. It took him that long to cap a pair of incisors. It hurt like hell, but by the time he was through I was no longer afraid to smile in public.

"You look human again," he said.

I arose from the chair and smiled at myself in the mirror above the sink. The teeth were as good as new. I turned and grinned at him.

"You did a good job. They look great."

In his reception room I stood smoking a cigarette while he used a pencil and paper to figure out how much I owed him.

Sy Daniels was somewhere between forty-five and fifty, with rounded features and bushy eyebrows and thick glasses. The most memorable thing about him was the taste of his fingers. He smoked more than most dentists I'd ever had anything to do with, and he smoked some special Turkish blend that tasted even worse than it smelled, and by the time I had gone to him three times I dreaded the taste of his fingers as much as the filling and capping.

I was nearly finished with my cigarette when he turned around to look up at me and tell me I owed him sixty bucks. The fee seemed reasonable but hurt anyway. I dug out my wallet and counted out the bread in tens. I gave him the bills and he marked the tab paid and handed it to me. I stuffed it in a pocket and managed a smile.

"Between you and a few poker games," I said, "this wallet is getting pretty flat."

"A little," I said. "I used to lose a few bucks a week in Chicago. We had a regular game there. But I haven't been playing since I hit your fair city."

"There are plenty of games."

"If you like to play with strangers. I don't."

The dentist shook out a cigarette and offered the pack to me. I said thanks but no thanks and he lit his and smelled up the office some more. "I know what you mean," Sy said. "About playing with strangers. But if you like a friendly game, we've got a small group of fellows who meet every Friday night. There's a seat open tonight, if you're interested."

I let my eyes light up. Then I lowered them and chewed on my upper lip for a few beats. "I'd love to play," I said. "But—"

"Well, I wouldn't want to get in over my head. What kind of stakes do you fellows play for?"

He told me it was just a friendly game, dollar limit, dealer's choice. They played five-card stud and seven-card stud and straight draw. They had a three-raise limit, no sandbagging, no high-low, no wild cards. My eyes lit up all over again. I told him that sounded just about perfect, that I'd been afraid for a minute that the game was one of those wild table-stakes ones where you needed a few hundred dollars to sit down.

"Oh, nothing like that," Sy Daniels told me. "This is just a friendly game, Bill. I think you'll like it."

We made the arrangements. The game was at the house of somebody named Murray Rogers, a tax lawyer. Daniels was going home for dinner. He invited me to try his wife's cooking but I dodged that with a story about a dinner appointment. He mentioned a drugstore uptown and said that if I could be there around a quarter to eight he'd pick me up and run me over to the game. That was fine, I said. I shook hands with him and left.

It was time for lunch. I had a pair of hamburgers at a lunch counter on Main Street and tried out my new teeth on the ground maybe-chuck. It was nice being able to bite into food again. I drank a few cups of coffee, smoked a cigarette, left the joint and took a bus back to my hotel. I was staying downtown at the Panmore and I walked through the lobby to the elevator without taking a peek at the desk. I'd been in town a week and they were about due to ask me for part of my tab, which could be embarrassing. I wasn't too flush.

In my room I found out just how flush I was. I dumped my wallet on the bed, then found the rest of my poke in the dresser between a pair of white shirts. I counted it all up and it came to a shade over eighty dollars. I owed about double that to the Panmore; I'd been eating two or three meals a day there to make my cash last as long as I could.

I put all the money in my wallet and stuck it in a pocket. I opened the top drawer of the dresser, took out a deck of cards, sat down on the bed and started to fool around with them. I ran through a couple of false shuffles, dealt a few rounds of seconds, ran cards off the bottom, practiced top-card peeks and false cuts.

My left thumb was a little rusty. The boys in Chicago hadn't broken it, but they had managed to dislocate it and it took a little while to get the dexterity back. I practiced for an hour in my room and the thumb started doing what it was supposed to do.

At the end of the hour I took down the mirror from the dresser and propped it up in back of the writing desk. I sat at the desk in a straight-backed wooden chair and dealt a few rounds of seconds and bottoms while I watched myself in the mirror. When I got to the point where I couldn't even catch myself, I knew the boys at Murray Rogers' house weren't going to tip to me. It would be a profitable evening all around.

I put the mirror on the dresser, stuck the deck of cards in a drawer. I went downstairs to the bar and told the bartender to pour some Cutty Sark over some ice cubes. I sat sipping the drink and thought about Chicago and a dislocated thumb and two chipped teeth.