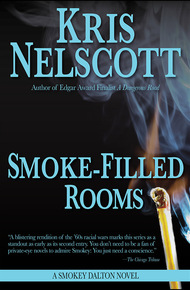 The first Smokey Dalton novel, A Dangerous Road, won the Herodotus Award for Best Historical Mystery and was short-listed for the Edgar Award for Best Novel; the second, Smoke-Filled Rooms, was a PNBA Book Award finalist; and the third, Thin Walls, was one of the Chicago Tribune's best mysteries of the year. Kirkus chose Days of Rage as one of the top ten mysteries of the year and it was also nominated for a Shamus award for The Best Private Eye Hardcover Novel of the Year.

Entertainment Weekly says her equals are Walter Mosley and Raymond Chandler. Booklist calls the Smokey Dalton books "a high-class crime series" and Salon says "Kris Nelscott can lay claim to the strongest series of detective novels now being written by an American author."

For more information about Kris Nelscott, or author Kristine Kathryn Rusch's other works, please go to KrisNelscott.com or KristineKathrynRusch.com.

On the run after the assassination of Martin Luther King, Jr., Private Investigator Smokey Dalton and Jimmy, the young boy he rescued, have settled under assumed names in Chicago. But history won't leave him alone. His job in security at the Chicago Hilton places him in the center of the protests at the 1968 Democratic Convention. Worse, a killer works his South Side neighborhood, killing children. The Chicago Police Department doesn't solve crimes in the South Side. Smokey can't ignore the crimes, any more than he can ignore the tension building in the city that hot August. He has to take action, before he loses everything.

Chosen as one of the top ten mystery novels of the year by both Deadly Pleasures and Booklist, Smoke-Filled Rooms fulfills the promise of the award-winning Dangerous Road, and makes Smokey Dalton into one of the mystery field's most memorable detectives.

I HAD BEEN IN THE LOOP all morning. I had found a seat on the concrete steps leading up to the "L," and no one had asked me to move. Dozens, maybe hundreds of us crowded the steps. For an hour, the trains hadn't stopped and the platforms above me were closed, although policemen patrolled them.

They were searching for snipers.

The year of assassinations continued.

I hadn't told anyone where I'd gone. I wasn't talking much these days. I no longer felt as if I had anything valid to say.

It was September 4, 1968, only a week since the entire city of Chicago had erupted into chaos. Only a week since I had made a choice I couldn't have contemplated a year ago.

Only a week since everything had changed. Again.

The street was eerily silent. Hundreds of thousands of people gathered under the steel-and-concrete skyscrapers and didn't say a word. Police and National Guard, their rifles ready, kept the crowd on the sidewalks. Squadrols—paddy wagons in any other town—were on side streets, waiting in case last week's riots started anew.

I had no real idea why I had come. I'd felt drawn here, as if this place, these people, this moment could give me some perspective.

There were very few black faces in the crowd. We stood out so dramatically that the police gave us special attention. I sat so that no one realized how tall I was or how broad. My very size intimidated people. And I kept my hands in view at all times. I didn't want to start anything, even inadvertently.

Chicago had witnessed enough violence in this long hot summer.

I had embraced darkness because it was the only choice left.

The year of assassinations continued.

And in the midst of all these thousands of people, I was more alone than I had ever been.