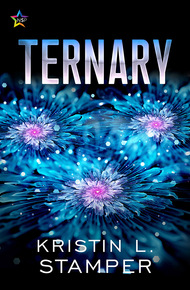 Kristin L Stamper is an adult science fiction author. Her love of storytelling began as a child playing pretend in the backyard. Once society had successfully pressured her into knocking that off, writing became her new creative outlet. When not writing, she is studying to become a teacher and is a full-time child-wrangler (also known as a mother).

Elora isn't a robot, but she isn't human either. She's an abominable combination of the two: a cyborg. For this offense, she must face judgment in a court of law. There, it will be decided if she's a person, owed the same rights as any other, or an object, owed no rights at all.

But when a last-ditch effort to demonstrate her humanity backfires, Elora is faced with an element of human nature she always hoped to avoid: love. An accidental download traps the consciousness of a dead man in her cybernetic brain, and she becomes infatuated with his still-living husband - whether she wants to or not.

Making her way in a solar system that fears and hates her has been hard enough. Now, she must do it as an intermediary between lovers, while keeping her own heart in check. With the trial fast approaching and anti-robot protesters demanding her head, Elora can't afford to get swept up in someone else's love story.

Although Della assures me my brain won't explode, in the interest of safety, I've been squeezed into an EVA suit. It might offer some protection during the mission, and if I die, it'll make my corpse easier to find when I'm spat out of an airlock. Heaven forbid my cyborg body float off into space, never to be poked, prodded, and disassembled in the name of science.

The cumbersome suit restricts my movements. Della instructed me to spray the inside of the helmet with an antifogging solution, but I forgot, and I'm blinded by the white spot my breath blows over the glass. Speaking of breath, each one I take echoes in the bowl like a foreboding whisper. The neckpiece is strangling me. I don't know where my steps are landing. Claustrophobia is creeping in.

It's not a great start to the operation.

It's supposed to be simple. I'm to enter the Compass core and bring Fuentes, the lost crewmember, back to the Aidos. Assuming Della is telling the truth about my brain not exploding, it shouldn't be a problem. The hardest part will be locating him since no one knows where he is, and the Compass is huge. It dwarfs even the largest human-made space stations. The central spire, containing the core, spans miles.

"Step up, Elora," Della tells me as we cross through the doorway between the Aidos and the Compass. It's a good thing, too, or I would have tripped and fallen flat on my face.

The Compass interior looks like pure glass and gold. Blue, glowing spheres of energy float in the air and reach with squirmy tendrils to feed the equipment hovering on rings around us. Translucent blue panes make up the walkway, and the magnificent craftsmanship is visible all the way down to the bottom floors. Elaborate alien shapes and designs adorn every surface. I can only imagine how magnificent it all would be without the stupid helmet on.

The metallic, bug-like Fen, each the size of a golf ball, aimlessly crawl around in thick swarms. I hear the soft fnnn sound they make like Della said I would. Also, as Della said, they go about their business without paying us any attention at all. They don't even notice we're there, and a few run straight up and over our feet.

Thanks to Hamasaki considerately pulling the Aidos up to one of the innermost rings for us, we don't have far to walk. The core waits for me behind a metal doorway, solid, save the porthole of a window at eye level. The Compass inside looks the same as outside: just more hallway. Nothing dangerous or ominous.

"I can't go any farther," Della says. "You're on your own from here, but you can always contact us on comms." She holds up my right arm and shows me the comms button on my wrist. "It's push-to-talk. I'll be monitoring the other end." She pats my back. "Good luck. Hopefully, Fuentes is still in one piece when you find him."

I give her a half-sarcastic thumbs-up and wait for her to clear the area before I open the door. It's an old-fashioned bolt, easily broken and hardly secure. Whoever built it wasn't concerned with the comings and goings of others. Like the Fen themselves, it's passive. Almost welcoming.

The door shuts behind me, and that's when I feel the pressure. Literally. It starts around my temples as if someone is pressing their fingers into the side of my face. Then, something bears down on my eyes. The top of my skull. The nape of my neck. Dizziness and disorientation set in, the pressure increasing by the second. A tremendous weight compresses my head. My vision goes white, and I instinctively try to rub my eyes, but my fingers collide with the outside of my helmet.

I cry out in pain and attempt to adjust the environmental controls of the suit. But I wasn't paying attention when Della showed me how to do it and wind up uselessly banging on buttons and switches at random.

It's unbearable! My head is about to pop! I rip the helmet off and throw it across the room. The pressure instantly subsides, and my brown hair tumbles freely around my shoulders.

As the bees in my brain clear out, I open my eyes to a new world. My vision is still white but only because everything is white. I'm in a vast, white, empty nothingness. The Compass is gone.

Someone appears out of the nothing. It's a person, but he—she?—they have no distinct features. Their image is a blur. It's like trying to distinguish the details of someone sitting several feet underwater. And then it occurs to me: I'm looking at them from behind. I try to walk around to see them, but no matter where I go, I'm always at their back.

"Interesting. I would like to get to know you better."

The figure turns, and from their eyes, the white nothingness gives way to a stream of images, sounds, smells, tastes, and feelings all at once. An infinite flow of input, too much for me to handle, overloads my senses. I desperately search for something, anything, to hold on to, trying to make sense of the reeling evanescence of it all, but I'm drowning in it. Crushed by it.