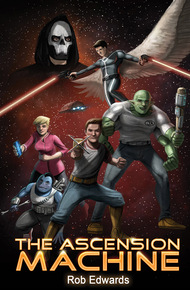 Rob Edwards is a British born writer and content creator, living in Finland. He writes about coffee, despite not drinking it, spaceships, despite being down-to-earth, and superheroes, despite everything.

His debut novel, The Ascension Machine was published in 2020. His short stories can be found in anthologies from Inklings Press and Rivenstone Press. A life-long gamer and self-professed geek, he is proud of his entry on Wookieepedia, the result of writing several Star Wars RPG scenarios in his youth.

The Ascension Machine by Rob Edwards

How can Grey fight for truth and the Justice Academy way, when he had to lie to get in?

Welcome to the Justice Academy, the galaxy's premier college for superheroes. It's a place to make friends, learn to fight intergalactic crime, with a little self-discovery along the way. It's that last one that bothers Grey. If anyone discovers he's not who he claims to be, his time at the Academy is over.

Taking risks to protect his secret, things spiral out of control. Grey needs help when the person he is claiming to be is kidnapped, but how will his new friends react when they discover the truth?

It began with a lie.

"That's nothing," I said, "I once convinced an auto-teller I was a Brontom clone."

"Ha! No, you didn't." I don't remember the guy's name, but I remember the smell: beer and travelled-in clothes. He took another swig of his drink. "How? Look at you! How does a twelve-year-old—"

We sat in a bar on Meanwhile Station. The kind of bland, soulless, no-questions-asked sort of place you'll find on any large transport hub. Not technically humans-only, but the décor, the music and the sports on the screens were all Terran-themed. By station time it was early, there were only a handful of patrons in, and my ripe-smelling friend was the only one drinking in earnest. I was hustling for breakfast, so I was wide awake and drinking coffee.

"Sure, yes, and they do have four arms like you say."

"But get this, they are clones, right? Identical. Fingerprints, retina prints, bone structure, even DNA matching can't tell one Brontom from another. They all, literally, look alike.

"So, while I couldn't convince the auto-teller that I was a Brontom, I could convince it I was a particular Brontom. After all, it can't look at your retina, or fingerprints, your height, weight, none of that. It doesn't even count your arms. Do you know how they tell themselves apart?"

I fought the urge to roll my eyes. All I needed to do was get to the end of the story. Just keep his attention a little longer. "By scent," I corrected, "each Brontom has a unique chemical signature. So, to convince an auto-teller that you are a particular Brontom all you do is to spray it with some specially made Brontom perfume. Simple."

He ran a hand through his hair, shaking his head. "That's unbelievably amazing," he said.

The thing on the table that I'd told him was my minipad beeped. My Ripper, all done. I got up to leave.

"Nice to meet you, Mark." He raised his empty glass in a toast. "What happens when they find out? Do you get some angry green dude chasing you around the station?"

I paused. "Not usually. I never take much, enough for my next meal maybe, and never enough to be worth coming back for. If you wake up tomorrow and realise your credit stick is light by twenty credits, would you fly all the way from Brontom Prime just to get it back?"

He shrugged. "Guess not."

"Good to know," I flashed him a grin. "Oh, hey buddy, I think they're calling your flight."

I may have gone too far. Something I said - and we may never know what - made him check the levels on his credit stick. As he struggled with basic arithmetic, I made for the door.

I ducked through and cut left, accelerating between a few surprised passersby. Cut left again, and hard right. If he was as drunk as he seemed, that should be enough to lose him.

I cast a glance backwards. He was still with me, face red, but arms and legs pumping. Huh. Okay, Plan B.

The next turn put me on a balcony overlooking a shopping arcade. It would be quiet this time of day I knew: perfumes and triangular chocolates are afternoon purchases, even on station time. I ran the length of the balcony, counting off railing posts. At the seventh, I planted one hand on the railing and vaulted over. I dropped a metre and caught myself on the top rung of a safety ladder, shifted my grip to the outside, and slid down to the ground.

That should do it, only a drunk idiot would try and follow that stunt without knowing the ladder was—

I sprinted across the arcade and ducked through a Staff Only door.

When I'd passed this way earlier… yes! A little further along the corridor than I expected, but still there, and still well-stocked: a cleaner's cart. I swiped a bottle of cleaning spray as I ran by.

Bouncing off the wall, I turned right at the end of the corridor and spared another glance back. Considering he was middle-aged, drunk and jet-lagged, he was keeping pace disappointingly well. Maybe he ran half-marathons at the weekend back home. He hadn't seemed the type when I tagged him but live and learn.

Foot traffic was busier now that we were off the tourist lanes, there's always work to be done, and people were setting up for the day. I threw some apologies to those I clipped in passing, managed to avoid a full-on collision with a last-minute body-swerve, and missed sprawling flat on my face only because of a clumsy hop over somebody's toolkit.

And still, he followed. A massive over-reaction for the price of breakfast, but people can be strange, sometimes.

Time for a calculated risk. Three pressure doors, each with a gut-squeezing two-second delay between hitting the open button and the hatch whooshing upwards. Each pause gave the drunk guy a few more paces on me. As I slapped the third hatch open, I heard him, no, now there were two sets of feet beating the corridor right behind me.

I dived under the third hatch as it opened, grasping fingers grazing across my shoulders. I tucked my head in and pelted into Hydroponics. Rows of… green stuff blurred by. I'm not sure what it is they keep in Hydroponics, but I know they're super careful with it.

While it's called a Hydroponics Bay, it's more a series of smaller compartments, each one designed to be sealed separately in an emergency. The idea being that no crisis should be able to wipe out the entire supply. I'd been careless on a cleaning job a few jumps back and the chem sensors had reacted spectacularly to a trivial spill. At the time I was mortified, but I'd filed it away as useful.

I slowed at the far hatch, slapped it open. Enough of a lead. Just.

I pointed the cleaning spray at the chem sensor and pulled the trigger, hurling myself back as I did.

It took half a second for the chemical fumes to hit the sensor, then the protective hatches slammed shut.

"Attention please," an automated voice intoned, "anomaly detected in Hydroponics A. Please stand by. Maintenance crew to Hydroponics A, please."

It would take at least five minutes to clear the area as safe, plenty of time to make myself scarce.

There was a window in the hatch. On the other side, the drunk guy and someone that I vaguely recognised from the bar earlier, were red-faced and breathing hard. The drunk guy was holding his side in some pain. I waved the cleaning spray at them and was disappointed I couldn't hear their shouted replies through the hatch.

I twirled the spray bottle around on its trigger and made to slide into a holster. Not that I had a holster, but they couldn't see that through the hatch window.

I turned to find a Hydroponics engineer and a Cholbren from station Security staring at me.

We sort of considered each other for a moment.

The Cholbren recovered first, her shoulder fur rippled. "What—"

And off I went again!