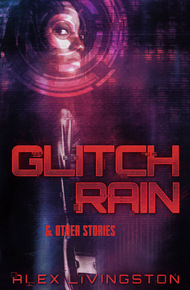 Alex Livingston grew up in various quiet New England towns before moving to Buffalo, NY to study English at Canisius College. He is married and lives in an old house with his brilliant wife and a pile of aged videogame systems.

Glitch Rain and Other Stories by Alex Livingston

Akuba is a low-level hacker for the city's wealthy, making just enough to keep her bills paid and her booze flowing. Her job is to scrub the social feeds for faces who don't want to be seen, hanging out at parties to guard the elite from errant social media statuses and incriminating photo posts. Not the most glamorous job, but she's getting by.

When an old debt comes due early, suddenly she is the one who needs to keep her face out of the drones' omnipresent eyes. Thrown into the high-stakes world of international cybercrime, Akuba will have to outmaneuver unlimited surveillance, high-tech con artists, and an international hacker kingpin if she wants to survive. Every identity has a price in Glitch Rain.

In Proximity, fashion, crime, and tech overlap as a team of stylish hackers shoot for the juiciest data take of their careers.

Join a high-speed pursuit through autonomous traffic and surveilled streets in The Drive.

Akuba needs to get rid of her client's face if she plans on living past the week.

She sees herself from above, the image floating in front of her eyes. She's in a gondola, high above the canal. Isaac is with her.

He tweaks something on his phone. "Getting it?"

She nods. Her new airhud keeps the video in the same spot, in the upper left of her field of vision. She slides down the bench to get a look at the city's dark skyline, making the gondola sway. They're too far away from downtown to see any people, but the haze of drones is just visible in the fading light. The airhud puts bubbles above the buildings, recommending places she can spend her daily.

"Can't believe you bought that thing," Isaac says with a petty grin. He told Akuba once that his teeth are so very white from sucking on sugar cane as a boy back in Gulu. He tells her lots of things. "What's wrong with your phone?"

"I got a bunch of kiz from the last job. And it'll be useful." It won't really be all that useful, but that's the kind of thing people say about money. Responsible people. And airhuds are getting so popular now. They're not as expensive as they used to be.

Isaac sniffs. "Tell that to Shaky. He'd rather you paid him than bought yourself pretty toys." He takes her hand, pushes up the sleeve of her very flash technical jacket, and locks an unadorned black plastic bracelet around her wrist. It looks like a fitness tracker.

The video of two very stylish people sitting in a gondola shivers as a red light pops to life on the bracelet. The angle changes immediately as the passive security drone watching them moves on to other things.

"When's he expect your next payment?" Isaac asks.

"It'll be fine," Akuba says. "See? Your drone trick is working great. It's like I'm not even here."

The video cuts out as the drone gets too far away for Isaac's signal. "Gonna take more than just confusing a few drones. I can't even be sure I'll be able to pull this off. Depends on what they're running. Do we know where we're going yet?"

The city installed the gondolas a decade ago to show off all the new build. The clickbaiters say it's one of the Top Twenty Urban Day-Trips You Can Make For Under Fifty Bucks, You Won't Believe #7. They don't say it's one of the top twenty spots in the city to plan some crime. No sec cams up here, and the drone cover is light.

Isaac leans back and crosses his feet on Akuba's bench. His sneaks are too old for her taste, but his pants fit well and he looks good in a track jacket. "So what happens if you're late on a payment?"

A text comes in, sparing her from having to think too long about that. The client.

"Corner of Gwaldam and Elm," she says. "Eleven o'clock."

Isaac flicks at his phone for a few seconds. "Corp sec. Drones should be okay. Don't know how we're gonna get in, though."

She doesn't know either. But she's damn sure she has to figure it out real fast.