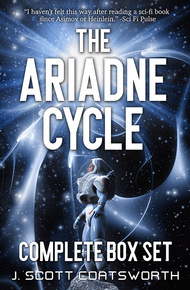 Scott lives with his husband Mark in a yellow bungalow in Sacramento. He was indoctrinated into fantasy and sci fi by his mother at the tender age of nine. He devoured her library, but as he grew up, he wondered where all the people like him were.

He decided that if there weren't queer characters in his favorite genres, he would remake them to his own ends.

A Rainbow Award winning author, he runs Queer Sci Fi, QueeRomance Ink, and Other Worlds Ink with Mark, sites that celebrate fiction reflecting queer reality, and is the committee chair for the Indie Authors Committee at the Science Fiction and Fantasy Writers of America (SFWA).

Liminal Sky chronicles humankind's first journey to the stars. The first three books - the Ariadne Cycle - cover the creation and launch of Ariadne (aka Forever) as she was grown from seed on an asteroid and then launched across the interstellar void. The books are told in epic fashion, with each broken into three parts that span generations. Includes The Stark Divide, The Rising Tide, and The Shoreless Sea.

Lex floated along with the ocean current. Her arms were spread out wide, her jet-black hair adrift on the surface of the water. For once, she felt at peace. Truly herself.

The sun shone above her, and she soaked up its rays, basking in its golden glow. Her blue eyes stared up at the equally blue sky, not a cloud in sight. Soon she'd be called back to duty. Soon she'd once again have to face her limited, jury-rigged day-to-day existence. For a few moments, she was free to just drift.

The Dressler, a Mission-class AmSplor ship, sailed toward a city-sized rock named 43 Ariadne, harvested from the asteroid belt and placed in trailing orbit behind Earth. The starfish-shaped ship flew on the solar wind, drinking in ionized hydrogen and other trace elements that allowed her to breathe and grow, coursing slowly through the dark reaches of space between Earth and the sun. The Dressler lived on solar wind and space dust, accumulating them with her web of gossamer sails between her arms, filtering them down into her compact body for processing.

The detritus flew out behind her, leaving a jet trail across the void to mark her passing, leading back to Earth. Somewhere out there, their destination awaited them, an asteroid floating on a sea of stars.